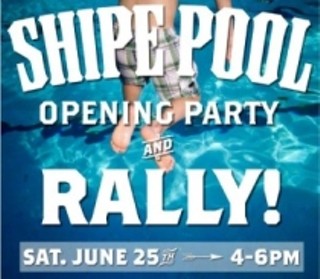 Shipe Park isn't Austin's nicest use of green space – nor is it particularly spacious, well-designed, or attractively landscaped. It is, however, regularly used – not just by homeless people, dirty-faced toddlers, and anxious dogs looking to make a deposit, but by the sick freaks who insist on undermining evolution by experiencing life through something other than an LCD display. Weird, right? Instead of letting themselves mutate into wholly inert, amorphous blobs of gelatin like God clearly intended, some people choose to engage in subversive, antiquated activities like walking, running, playing sports, swimming, and other useless kinetic endeavors. While Shipe Park isn't particularly ideal for these sorts of activities, it is convenient and serviceable. It has a small playscape, some swing sets, a tiny basketball court, tennis courts, and a small pool. All of these amenities make Shipe Park a literal playground for these pig-headed subversives. Who pays for this nonsense? You do! That's right – your hard-earned tax dollars are being wasted on people who refuse to spend money on PlayStations Xboxes, or even Wiis. It's a travesty, no doubt, but one that's soon to be corrected. The city of Austin, long a shrewd custodian of municipal funds, has proposed closing the Shipe Park pool in order to save money – presumably money that can be used to fund vital shit like unnecessary traffic lights. Duval Street and 51st? Really? Perhaps there is a secret Office of Public Irony at City Hall that handles such things. If so, it is operating at peak efficiency. How about that? Government that works! Don't go getting your Glenn Beck panties is a wad. Government, like any large organization, has its share of fuckups, but that doesn't mean we should ditch it entirely. Big government like big business needs vigilant oversight, and vigilant oversight costs money. These days it seems, especially in conservative camps, spending money on social services and infrastructure (some call it government) is the equivalent of throwing it down a hole. The reigning wisdom these days, it seems, is to starve government of the money it needs to actually do its job. This perpetuates the image of government as being ineffectual, which acts as a disincentive to give government the money it needs. Genius. This way the working man can spend that extra 40% (that being the average amount an American citizen pays for income taxes, sales taxes, property taxes, sin taxes, Social Security, and Medicare) of his income making his own smart choices about accessing quality health care, educating his children, saving for retirement, defending his country, policing his community, and building roads, reservoirs, public utilities, and other useless shit like playgrounds, parks, and … yes … even pools. Pools? Really? Why doesn't the government just buy everybody a pony too? The crazy idea that Americans should elect people smarter than themselves to make wise decisions about improving society for everyone is a ridiculously outdated notion. We're much better off letting Joe the Plumber figure that shit out on his own. Who knows? We might be amazed by what someone with a GED and a cosmetology license can do on her own with space exploration, brain surgery, or electrical engineering. Regardless of how helplessly the American people spiral into poverty and stupidity, the answer will never be more government. We tried that, and it didn't work. We now know that private corporations can run things like prisons, tolls roads, and schools, and we all know that private corporations have our backs, 100%. So, will closing down Shipe Park's swimming pool save us money? Hell yes it will! And if those subversives in Hyde Park still want a pool, surely the city can find some private pool-maintenance company willing to step in and keep it open – for a price. If you're one of those subversives and want to have a say in the future of Shipe Park's pool, show up at the park this Saturday at 4pm for the Shipe Pool Opening Party and Rally. Not only can you rally and voice your concerns about the pool's future; you can also join the potluck party afterward for live music, burgers, and swimming! That's a lot of activity, but that's what parks are all about, right?