Luv Doc Recommends: Michael Ventura 'If I Was a Highway' Booksigning 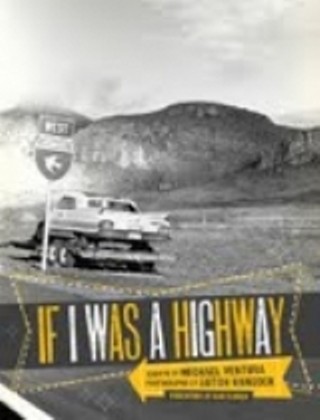 Right now is a really bad time to go hunting jackrabbits with that vintage World War II flamethrower you've been storing in your attic. Surely no one would argue that idea is positively rank with the stench of depraved genius (after all, who doesn't want to woast those wascawy wabbits?), but it will have to wait for a wetter month. May maybe? April has been a dry hole so far, and Mother Nature spent the last nine months cooking Texas up a big batch of extra crispy. You may have to postpone your bottle rocket war as well. After all, desperate times call for desperate measures, and there are plenty of ways to put your eye out that don't involve incendiary devices. For that matter, there are plenty of ways to kill yourself without smoking cigarettes – prettier and less painful too. Perhaps none of them are as satisfying as taking that last long toke that burns nearly down to the filter, then tossing the smoldering butt into your pickup bed where it will … Jesus! That was quite a crosswind, wasn't it? Who saw that coming? Is it your fault the side of the road is a golden tinderbox? You're not one to play the blame game, but if you were going to start pointing fingers, you'd surely aim one toward the heavens – or perhaps toward KVUE Storm Team meteorologist Mark Murray. Treacherous bastard. You just know he's back there behind the curtain working those weather levers like the Wizard of Oz … a good man yes, but a very bad wizard. He (God or Mark Murray) might as well be driving around Texas straddling a tanker truck hosing down dry brush with gasoline, whooping and cackling like Slim Pickens at the end of Dr. Strangelove. In the movie, Slim was riding a huge boner/nuclear warhead rather than a gas truck, but the results of either are pretty much the same: a blackened, smoldering hellscape. That describes more than a million acres of real estate in Texas this week and several hundred homes as well. Is this the beginning of the apocalypse? Is it time to stop using your rosary as anal beads and start knocking out some Hail Marys? Well, truly that's a pretty decent idea regardless of whether you're going to burn in hell – for safety reasons alone – but it's doubtful the current conflagration is a sign of end times. Rather, it's an ecological phenomenon that's been going on for ages. Good lord, didn't you read Little House on the Prairie? With the roaring prairie fire in the screaming wind? Whether you live in a wooden house, a sod house, or the Lord's house, every now and then, things burn. Yes, Texas is experiencing a bleak springtime, but it's springtime nonetheless, and this weekend we have Easter to remind us (whether gory Christian bloodbath or pastel pagan fertility rite) that life and hope spring eternal, even in the blackest of times. Eventually the charred landscape will get recarpeted in green, homes will be rebuilt, fences will be mended, and lessons will be learned. The first and foremost of which is: Everything changes, just maybe not on our timetable. On a geologic scale, these events and even the whole of human experience are infinitesimal snapshots. It's a good thing we have people like Michael Ventura to develop these snapshots and give them the importance they deserve. If you're not intimately familiar with his work, Michael Ventura is the author of the Chronicle's "Letters at 3am," a brilliant column of essays about life, mostly set in the American Southwest. This Friday he appears at BookPeople to promote his latest book, If I Was a Highway, a collection of some of the best "Letters at 3am" essays combined with black-and-white photographs by singer-songwriter/artist/photographer and West Texas desert rat Butch Hancock, whose song of the same name lends the book its title. When it comes to good writing, Ventura is almost always on fire … much like Texas itself.