Letters at 3AM: Stirling at Road's End

Stirling Silliphant had a marvelous gift for writing, but he sold it out 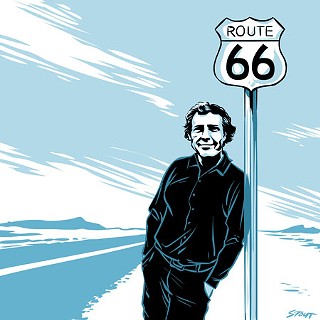 Stirling Silliphant had the face of a man who'd compromised too much and too often. He'd scripted famous, trashy fun like The Poseidon Adventure and The Towering Inferno. He won a 1967 Oscar for In the Heat of the Night, a screenplay important in its day. And he wrote heaps of celluloid junk, lived the Hollywood life, and made big-time money most of the way.

Toward the end, he wrote paperback potboilers. When we met in January 1986, he brought me one as a gift. I remember not a thing about the story, only the writing: well-paced, professionally empty prose. The worst parts were when Stirling would get a nudge from his long-spent inspiration and really try to write well. There would follow several paragraphs of sprained intentions from a talent that had little muscle left and no conviction.

We met in a Beverly Hills eatery. I'd recently turned 40; Stirling was 68. As a writer, he'd been my first hero. So here was my hero, Stirling Silliphant: affable, dressed expensively, a nondescript and broken man. I think of what James Baldwin said of his first artistic hero, Beauford Delaney: "I lived to see him broken but I never saw him bow." Stirling spoke to me without hypocrisy and almost without self-pity. He justified nothing and blamed no one. He'd had a marvelous gift, and he sold it out.

Selling out is not a one-time thing. You can take your gift slumming now and again – to pay the rent or for the hell of it – but when that becomes routine and you get used to doing much less than your best, your best recedes, dims, and disappears. But it is never irretrievable. That's the problem. The writer knows it's still there, somewhere within, and knows that with sacrifice and with an incredible, audacious effort, that gift might come alive again – but such an effort takes reserves of character that few possess.

Stirling enjoyed calling himself a whore. It was his way of telling me not to expect much of him. As he'd written long ago: "Every criminal acquits himself before he's judged. Every violator considers himself excused by circumstances. Don't you acquit him, don't you excuse him." Well, I hadn't come for hero worship. I'd come to say, "Thank you."

Stirling wrote the sentences I just quoted in a 1962 Route 66 teleplay, "Kiss the Maiden All Forlorn." Like many of his Route 66 and Naked City scripts, it was better than his Oscar-winning screenplay and far, far better than anything Stirling wrote after 1967, when he was 49.

Stirling's Route 66 dialogue reached out and grabbed you by the throat, as in "Between Hello and Goodbye," when Susan Oliver says: "I'm an eye, an enormous eye. Everything I see is unspeakably magnified."

Or when, in "Only by Cunning Glimpses," Lois Smith, that incredible actress, says: "The air about is alive with forces and events, none of which ever change. They're always there, and we move among them like planets around stars. There is no present, no past, no future, Todd. Only an always. And we are always here. ... We all pass into some other person's dream, and so live on from dream to dream, immortal and imperishable."

Route 66 was two guys – George Maharis (Buz) and Martin Milner (Tod) – driving highways looking for adventure and meaning. Shot on location from Maine to California, Tod and Buz drove through an America in which someone who was reasonably smart and willing to work could always find some kind of job. Their adventures grew organically from whatever jobs they found, adventures not of action but of the mind and the heart.

They signed on for the range and poetry of Stirling's characters.

Hear Julie Newmar in "How Much a Pound Is Albatross?" playing a leather-clad gal on a solo motorcycle journey (a daring concept in 1962): "What am I? A gallery of people, but which one? Somewhere between thought and naught, changing mind, changing mood – changing."

The first three seasons of Route 66 are on DVD. See for yourself. Interiors as well as exteriors were shot on location, so Route 66 has historical significance beyond its writing because it left a visual record of an America now long past. (See Austin 1962 in the episode "Even Stones Have Eyes.")

Some of us haven't the aptitudes necessary for the so-called normal life, and I suppose that's true of me. I passionately watched Route 66 in the early Sixties when I started writing, and, well, you might say that show ruined me for a normal life because it gave me another template, one I would not have had otherwise: Take to the road, go where you please, there's work to be had if you're willing, and incredible people are everywhere.

I believed it. I did it. Stirling was right. What he knew didn't save him but maybe it saved me.

Consistently, his scripts revolved around a sense of the psyche as a vortex of possibility, and a vision of the road as a manifestation of an inner journey that never has to end – themes that later became mine.

I am grateful I said my thanks to that damaged man, eye to eye. He saw in me evidence that his best work mattered. It was all I could give him.

The last words of the last episode of Route 66 in 1964 were Slim Pickins saying, "If you ever get around to Lubbock, look us up, will ya!"

By 1973, I'd forgotten that line. That was the year I drifted to Lubbock and met people who changed my life. I live in Lubbock now. Stirling would get a kick out of that.

Lubbock's Texas Tech University Press has published a collection of what I call my "road" columns, with photos by Butch Hancock and a title cribbed from a Butch lyric: If I Was a Highway. The book's prefacing quote had to be a Stirling Route 66 line that's never left me in times high or low:

"We have to become lost before we can find ourselves. That sort of map you make up as you go along."

Michael Ventura reads from If I Was a Highway at a booksinging at BookPeople on Friday, April 22, 7pm.

See "The Road Is Long," The Arts, for an interview with Ventura.

Letters at 3AM: 'I Have Heard the Mermaids Singing'
"Route 66" taught me that I did not want to be rooted again

Letters at 3AM: 'Suppose I Said I Was the Queen of Spain?'
In the early part of the Sixties, television's "Route 66" offered a taste of the new American consciousness