Your Style Avatar keeps confusing the Volstead with the Mann Act 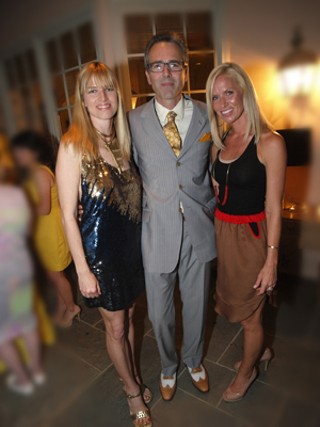 (From left) Elizabeth and Nathaniel Chapin (my vote for Best Dressed Couple in Austin) with the beautiful Ali Watson, who hosted Women & Their Work's wonderful Bold About Art fundraiser at her Pemberton estate (Photo by Seabrook Jones/www.juicythis.com)

THE VOLSTEAD ACT It was a requirement that I attend my old friend Neil Diaz's birthday party. Though his birthday was really during the middle of South by Southwest, he felt it was a poor time to have a splashy birthday party and waited until things settled down. (I'm sure he's plunging into his late 30s now, though he'd never admit it.) He held the party at the Volstead Lounge at the Hotel Vegas, Charles Ferraro's newest venture at 1500 E. Sixth (www.facebook.com/volstead). It's true that I don't spend a lot of time on East Sixth – it's so hip that it makes me nervous. So on this foray into deep hipness, I was shocked to see stylish hipsters of all persuasions practically pouring out of the doorways on every block. It's like the hippest little ant farm possible with all the little hipster worker ants working endlessly to find the next hip hovel. But it does seem to be thriving, bustling, and succeeding fabulously, and has remarkable charm and vitality, so it's inevitable that I must venture there occasionally to keep my in-the-know card updated. I've spent lovely evenings within the confines of Justine's (aka hipster central) and now at the Volstead Lounge. The lounge is named after the Volstead Act which created Prohibition – an apt choice to be sure – but I kept getting it confused with the Mann Act, which has to do with white slavery. At any rate, it wasn't called the Mann Lounge, or I would have been there a lot sooner. I arrived with Kappie Bliss and Charles Erwin (thanks for picking me up and taking me home to Manchaca Road!) to find Diaz sitting in the circle of death, which is how I describe any gathering that starts out smallish with all gathered around a table. I immediately flouted convention and parked myself on the patio where I could have deeply personal conversations with my friends and fans, one at a time. Ferraro came out and visited – he explained the rest of the compound, which exists under Hotel Vegas moniker. Hotel Vegas itself is pretty much a former flophouse with 12 private rooms. Now they are cleverly redone, and there's no trace of their sordid past. Rented to artists on a month-to-month budget, the rooms have their own sinks and share three baths, a common kitchen, and laundry facilities. They are all-bills-paid and include free wi-fi and a cleaning service, all for $550 a month. Faaabulous. On the ground floor at the hotel is the Volstead – a fairly typical dark bar with a diverse playlist, accommodating staff, and a spacious patio. The next development will be the adjacent outdoor venue, the Hotel Vegas Dive. I had a great time there, and indeed Neil's party eventually moved entirely outdoors and I hung with Cassie McIlhenny, the fabled Tabasco heiress; Christine Ann of Goodie Two Shoes; Coi Burruss, recent contestant on Hell's Kitchen; the glamorous Jacob Stetson; pop chanteuse Larissa Ness; the Austin American-Statesman's Marques Harper; and others too fabulous to mention.

WHOLE LOTTA SOUL As the spring crush of glamorous fundraisers is upon us, I would be remiss for not making sure you've purchased your tickets for all of them. Of utter importance is Zach Scott's Red, Hot & Soul 2011: You Can't Stop the Beat!, Saturday, April 16, 6:30-11pm at the Hilton Austin, featuring a Sixties theme accompanied by previews of Zach's upcoming presentation of Hairspray. Red, Hot & Soul promises to be one of the best damn parties ever. Go to www.zachtheatre.org for complete info... The Umlauf Garden Party takes place Thursday, April 28, 6:30-9:30pm at the Umlauf Sculpture Garden. This is one of the most glam garden parties, with stunningly beautiful sculptures in a garden of twinkling lights and bridges and a spread of divine food from so many of Austin's best restaurants. The irresistible Nash Hernandez Orchestra will play as the sun sets – just decide you're going to go and buy a ticket at www.umlaufsculpture.org... Then there's the Lady Bird Johnson Wildflower Center's enchanting 2011 Gala & Silent Art Auction. One of the loveliest parties in history, this year's special guest is former first lady Laura Bush, who I have to admit is one pretty cool dame. Dinner from the Four Seasons, gorgeous art, a great cause, and a spectacular setting add up to one dynamite fundraiser on Friday, May 13, 6pm at the Wildflower Center. Go to www.wildflower.org for further info.