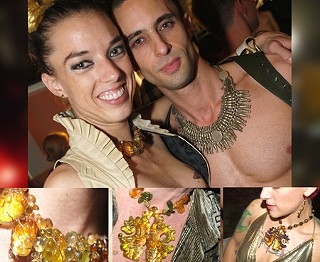 Artists and jewelers Kati and Hilal Hibri and
some of their creations at the fabulous
ArtErotica event (Photo by Seabrook Jones/www.juicythis.com)

R.I.P. LIZ I've never lived in a world without Elizabeth Taylor, and though her name has regularly turned up in death pools since the Sixties, I never thought she'd actually leave us. No brunette ever made the screen sizzle more than Liz. As a child star, she was the most enchanting to appear on the screen. When she developed into a young woman, audiences gasped at her rapid maturity. Once she became an established actress, few roles were beyond her reach (in spite of a number of true clunkers). And after she earned her stripes as a veteran actress, we no longer cared who she was married to or sleeping with: She was our Liz and we loved her. As a humanitarian, she had few peers. When the AIDS epidemic hit, Liz saw many of the brightest talents around her fall victim to the disease. Throwing herself (and her bank account) wholeheartedly into battling this scourge, it was impossible for her to rest on her laurels. Her power and connections helped bring unparalleled attention to the AIDS cause, and for the rest of her life, Liz's name was synonymous with AIDS fundraising. With her passing, we have lost a great actress and a great lady. But there's no use in searching the sky for a new star with her name emblazoned on it ... Liz has been a heavenly star for more than seven decades.

BIG, BIGGER, BIGGEST It already seems like the kind of year in which everything feels bigger and better than it did last year, and we can certainly add the Octopus Club's ArtErotica throwdown last weekend at the Seaholm Power Plant to that list. I can't remember how many of these I've gone to ... I think there have been 20 so far, and I've been to at least half of them. Is it because of obligation that I go? Uh, no. It's because this wild, ribald party is the most exciting and unpredictable event on the social schedule. And did I say bigger than ever? Bigger and better-presented, with more art, more costumes, and feverishly high expectations that were not disappointed. When I arrived early to judge the artwork, Seaholm was cavernously empty. As the judges prowled around deciding their favorite pieces, it might as well have been a morgue, it was so quiet, but I did, of course, arrive in the hearse limousine, so that was fine. There was erotic art of every description – some sensual and seductive, some in-your-face sexy, some compelling and thought-provoking – and some pieces were so over-the-top that I still can't stop thinking about them. As I was completing my task, the doors opened and the guests began arriving in droves. Within an hour, that huge space was jam-packed. From perfectly accessorized corseted women and towering drag queens in all their glory to submissive slaves and dominating daddies, the crowd itself was the party. Notable was a multimedia nude modeling display put on by the Art Department (www.theartdepartment.org), with the models being sketched, painted, and drawn in an array of digital and traditional media. Though I suppose I should have been gaping at the models, I couldn't take my eyes off the jewelry they were wearing – fabulous Aztec-inspired colored crystal pieces made of 47% lead glass that cast an unearthly glow. Created by Hilal and Kati Hibri of San Antonio (www.hibriglass.com), the work will debut in Austin soon. But the best thing about the night? Every penny raised went to the Paul Kirby Emergency Fund. Octopus Club, you've done it again ... and again ... and again. Thank you.

WORKING WOMEN Last year, Women & Their Work's annual benefit won a "Best of Austin" award for Best Arts Fundraiser for its outstanding ability to raise money for a fine cause while remaining chic, stylish, and exclusive. This year, the gallery is at it again with its Bold About Art Benefit Bash, Saturday, April 2, 8-11pm, at the artful, art-filled home of Ali and Trey Watson. It will be tough to outdo last year's event, but this year promises surprising performances courtesy of Denise Prince and KDH Dance Company, food by Suzanne Court Catering and Events, delicious drinks courtesy of Twin Liquors and Tito's Handmade Vodka, a silent art auction of pieces by local artists including Beili Liu, a photo booth with Trevor Ray Thompson, and DJ Mahealani providing a vinyl soundtrack. You know you want to go, so go to www.womenandtheirwork.org for tickets and more info.