WHERE MY QUEERS AT? Herrre, in your Gay Place in the A-Face (that one's for Kathy G).

UNDER AN AUSTIN SKY You SXSW regulars know we are a town in love with ourselves. Every chance Austin gets, we rub it in the faces of the young and green how much cooler this town was before you stunk it up. Take Slacker – our celluloid love letter to a city already hairy-palmed with its own self-fascination. Slacker was just unique enough to pose a dilemma: It was either going to launch a million imitators or intimidate nascent film babies to the point of never attempting its sheer goofiness. Something somewhere in between happened in the ensuing years, but it wasn't until this year that a film (please to overlook Linklater's follow-up, Dazed and Confused) cast Austin in such a strong and colorful light. We think Otis Under Sky qualifies as a new Austin love story – one of the finest inadvertent homages to our town we have ever seen. (Friends: You gotta know that if I am reco'ing a film with a love triangle involving a lesbian couple, and I'm rooting for the straight guy, I must really like it.) Today, Friday, March 18, 11:30am, Paramount Theatre, 713 Congress. 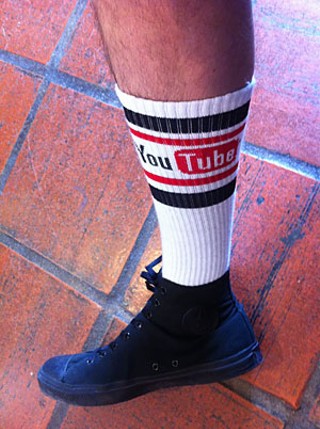 The swag accessory of SXSW 2011, handed out to lucky dogs at Film closing party. (Photo courtesy of Michael Bartnett)

THE CHILDREN ARE OUR FUTURE OK, they aren't children, but they are young and adorable, and we love what these (somewhat) straight sistahs do for Austin queer culture. Anything Allyson Garro and Angeliska Polacheck (see pic) touch seems to sparkle in golden glitter. Garro's Maison d'Etoile day show happens Saturday, noon-7pm, as does the Hook Up!, a sex-positive, queer-friendly fancy feast put on our radar by Polacheck. See tomorrow's daily for more deets.

ONE LAST GENESIS Yes, we are pimping it again. We think the film is that good. The Ballad of Genesis and Lady Jaye plays one more time. Tonight. If you have not yet seen this story about the love of Throbbing Gristle/Psychic TV icon Genesis Breyer P-Orridge and her wife, the Lady Jaye Breyer, jet pack, do not putt-putt. Friday, March 18, 9pm, Alamo Ritz 1.

BOMP LIKE YOU MEAN IT Austin expat and all-around friend of freaks and faeries (when she's not claiming the mantle for her own), Kerthy Fix (Strange Powers: Stephin Merritt and the Magnetic Fields) is back in town to premiere another rock doc to end all prior notions of rock docs, Who Took the Bomp? Le Tigre on Tour. This marks the second year that she and fellow expat Fausto Fernós from the super queerbo Feast of Fun podcast hit Austin concurrently, and one might suspect concertedly. What other delights and dastardly deeds do they have in store for their old home slices? You'll have to attend the screening or tune in to see. Saturday, March 19, 2:30pm, Vimeo Theater (501 E. Fourth).

TODAYNESS IN GAYNESS Here's what's tweaking our knobs. (Yes, we have knobs.)

• South by San José This annual tradition is hosted by one of Austin's least ridiculous power dykes, so you know there will be some fine sisters performing – like Amy Cook and Uh Huh Her, huh? Free. Noon-6pm, Hotel San José parking lot, 1316 S. Congress.