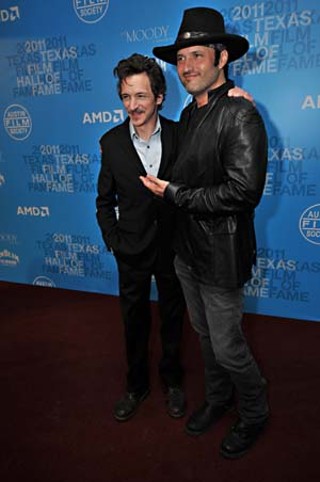 AND THE WINNER IS ... The cavernous Austin Studios was the most important place to be last Thursday night as the Austin Film Society presented its unofficial opening to the South by Southwest Film Conference, the 11th annual Texas Film Hall of Fame Awards. AFS Executive Director Rebecca Campbell, looking tiny and drop-dead chic, had plenty to be proud of as her staff operated as smoothly as clockwork to pull off this momentous event. The red carpet was littered with celebs and stars – especially in the eyes of guests treated to glimpses of the adorable Renée Zellweger (Dear Renée, I know I wrote some really stupid, sophomoric things about you a long time ago, but I was an idiot and hope you'll forgive me); Rip Torn, who arrived like he was being released from a bull pen; the cast of Friday Night Lights; Rising Star award-winner John Hawkes; the Daily Show's Wyatt Cenac; veteran newspaper columnist Liz Smith; the band Spoon, who took home the Soundtrack Award; and the multitudes of local luminaries on hand to celebrate. With a bit less fanfare and hoopla than in years past, the ceremony was simple, funny, touching, and inspiring. I especially loved Smith's introduction for Zellweger. To paraphrase her, the feisty octogenarian said, "All we've been hearing about lately is Charlie Sheen yapping away about how he is 'winning.' I have a different definition of a winner and she is here with us tonight ...." And so on. Liz didn't miss a single opportunity to refer to Renée as a "winner," and after multiple decades of writing about winners, Liz knows what she's talking about. Renée was delightful to visit with backstage – poised, demure, and a little in awe of all the attention she was receiving. As I posed for photos with her, Richard Linklater explained to her that I was a writer for The Austin Chronicle, and Renée was so effusive about the newspaper she loves so much that if we'd spent one more moment together we would have become BFFs. Love her. I also loved the afterparty, held on-site and featuring el john Selector of Thievery Corporation, Adrian Quesada of Grupo Fantasma, and dazzling eye candy from the Duchess of Crowning Flourishes, aka Coco Coquette (isn't that name appearing everywhere lately?), and a new talent-curating venture launched with Angeliska Polacheck (Gadjo Disko, Tranarchy, Vintage Vivant) called Peacock + Persimmon.

GENERATION TEXT If you were trying to make it through the convention center in a hurry on Sunday like I was, you know it was like bowling. No matter how I stepped around, behind, or out of the way, there was always someone headed directly into my path oblivious to anything else, texting furiously, face buried in an iPhone. Like the recent viral footage of the woman texting so intensely that she fell face-first into a shopping mall fountain, many mishaps occurred. Missed stairs were the most common problem, with two sightings of SXSW attendees losing their footing and falling forward into the stairs with their swag bags, Odwalla-type beverages and badges flying. If they had been going downstairs, they might not have lived to tell ... but it's unlikely they'll tell anyone anyway. I saw a young, one-handed texter careen into a closed door, crushing her fat-free mocha venti latte between her new SXSW T-shirt and the offending door ... then kick the door in anger for having the nerve to not know she was coming. And in an amusing twist on the old television commercial showing two guys bumping into each other and one saying, "You got your peanut butter in my chocolate," two young gentlemen bumped into each other so hard that a pair of eyeglasses went flying. As the owner bent to retrieve his spectacles, their badge lanyards wrapped around each other and it took a few moments to separate. Then they fell in love and lived happily ever after. OK, that last part didn't happen, but it sounds like a great screenplay, doesn't it? Someone call Jennifer Aniston's agent pronto.

PEE TEST The SXSW news story heard round the world involved an ill-mannered photographer who tried to take a photo of Jake Gyllenhaal relieving himself at a urinal after a screening of his new movie Source Code. Twitter is all aflutter with tales of a not-at-all-amused Gyllenhaal reacting quickly by allegedly pinning the photog against a wall and saying, "Are we really gonna do this now?" The purported scenario raises so many questions. Did Jake take the time to tuck and zip before he pinned the guy, or was he swingin' free? When Jake says "do this now" did he mean to imply that he and the photographer had arrangements to do the pee-pee photo shoot at a different time? What happens at SXSW stays at SXSW.