And So(Co) it begins: Your Style Avatar flits through SXSW one daily issue at a time 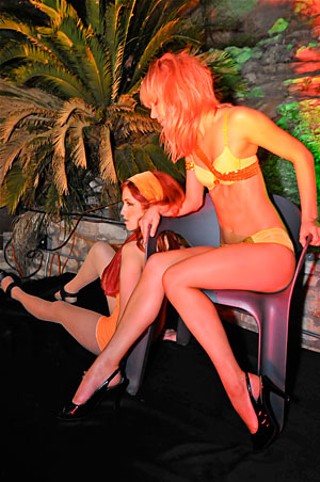 CHROMA-TIC Went to the Chroma party at the Mohawk, thrown by the Art Department (www.theartdepartment.org). The Art Department is an independent, nontraditional art school covering virtually every aspect of art and design, combining the traditional with the avant-garde. To showcase some of their work, the party presented digital art and traditional art in a breathtaking glow-in-the-dark multidimensional format. Everywhere you looked across the Mohawk's multilevel decks was a tableau of models posing as various artists rendered likenesses of them in many media. Cameras were trained on the artists and the models, and the images were projected onto enormous screens and interactive displays. International burlesque sensation Eva Strangelove also performed, and the jam-packed evening was a stellar highlight.

HOWDY TEXAS Arrived with Neil Diaz and the enchanting Larissa Ness to Stubb's for BMI's annual Howdy Texas Party. The busier-than-bejesus Jill McGuckin led us to that glamourous überpowerhouse, BMI's Hanna Pantle. It was the business of music nonstop, with beer and barbecue over a soundtrack by the Ginn Sisters, Gary Clark Jr., and the iconic Dale Watson. Hanna and I just didn't get enough of each other, so I'll be attending BMI's glam brunch at the Four Seasons on Friday for more of her charm and delicious, nutritious gossip.

CRASH We crashed the RDIO party at El Sol y la Luna – legendary proprietress Nilda de la Llata ushered us in and was an excellent hostess, of course, with surprisingly good humor considering the madness that was occurring inside her establishment.

TRUE LOVE The ubiquitous Roggie Baer caught the eye of Dave Grohl of the Foo Fighters before the band played their unannounced set at Stubb's. After some cheerful badinage, Grohl, who may or may not have been aware of Baer drooling over his "magnificent physique," said to Baer, "I've never smelled anything so yummy – I want to eat your head." Baer was entranced, and Grohl went on to play a two-hour set to an adoring crowd.

SEEN A furiously-texting John Wickham of Elysium, who will be hosting the world's most famous widow Yoko Ono, muttering to himself on the street about how everybody always needs something... The irascible Danny DeVito up late at the Four Seasons, cutting up for the camera with my trusty hearse limo driver, Chris English of Haunted ATX... A windblown but cheery Harry Connick Jr. and his family strolling down the street.

UNLIKLIER SUSPECTS Then there's the so-far-unconfirmed appearance of Kanye West with the Backstreet Boys and New Kids on the Block ... Believe me, those are some names that I never thought I'd write in this column.

THE FAME GAME We are definitely going to Rachael Ray's Feedback Day Party Saturday at Stubb's, featuring Wanda Jackson, the Bravery, and others ... and then to Rachael's oh-so-exclusive oasis to escape the crowds, the Greenhouse.

PEREZ SEZ Saturday night brings us Perez Hilton's One Night in Austin SXSW event. Confirmed participants thus far include Liz Phair, Taylor Momsen and the Pretty Reckless, Oh Land, and Selah Sue. Taylor Momsen, the raccoon-eyed postergirl for juvenile delinquency (and a favorite target of DListed.com's Michael K.) should be able to pull a few tricks from up her sleeve...

THE LOOK Find choice pieces of Austin-centric clothing at local retailers. South Congress, or the SoCo strip, as we call it, features quirky, unusual clothing from Creatures Boutique; styling from Wet Salon; noir couture, vintage cowboy boots, and gifts at Blackmail; cheap and chic clothing, shoes, and accessories at Goodie Two Shoes; locally designed funwear at Parts & Labour; charming, rugged menswear at Stag; a sizable assortment of traditional Western wear at Allens Boots ... and so on. Though we don't all look the same in Austin, the elements for most of our looks can be had in this little strip.