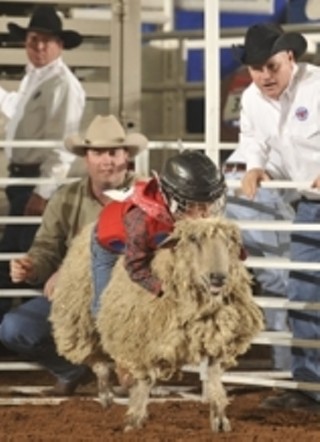 You didn't spend all that money flying to Texas just to experience the same bullshit blue-state bourgeois brownnosing you were trying to get away from. Even though you knowingly signed up for the largest cultural conclave in the Western Hemisphere – a veritable clusterfuck of desperation, sycophancy, and unbridled egomania – somewhere in some naive corner of your heart you were hoping to walk out of the terminal at the Austin-Bergstrom International Airport and immediately mount a mechanical bull … ideally one with Scott Glenn at the controls, maybe wearing a black-mesh shirt. After all, your travel itinerary said Texas, not Greenwich Village. You came here to drink longnecks, gnaw barbecue off a mastodon-sized bone, and speak with a hostile disregard for the conventions of grammar – maybe even buy a faux-distressed straw cowboy hat for about 15 times what it costs to have some 7-year-old Chinese orphan weave it. Don't worry about the orphan; think about how fly it will look with your Salvatore Ferragamo side-zipper boots! Besides, Texas is no place to get on your human-rights high horse – especially where kids are concerned. Texans will subject children to just about anything except a good education: kiddie beauty pageants, craft fairs, vacation Bible school, Chuck E. Cheese's, greased-pig chasing, and perhaps the pinnacle of tough love, mutton bustin'. No, that's not some obscure porn term like "flying camel" or "reverse cowgirl"; it's an actual rodeo event in which children between the ages of 5 and 7 (weighing less than 55 pounds) ride bareback on sheep. Yes, you read that right. Hilarious, you say? Youbetcha! Like their older bull-riding counterparts, it's rare when a brave/horrified little tyke doesn't get flung haphazardly to the dirt. Rodeo ain't for sissies. Plus, spectacularly awkward dismounts (rag doll windmills, somersaults with limbs akimbo, wicked face plants) are rewarded with gasps from the crowd, light beer shooting through nostrils, and, in certain instances, a ride in a real ambulance! Rest assured, nothing mans up a little cowboy (or -girl) like a white-knuckled thrill ride on the back of a terrified sheep. In L.A. or New York they might call that type of aggressive parenting abusive, but here in Texas, we call it Country Strong! Go ahead and wipe that condescending smirk off your face. We're not complete barbarians. Thanks to the worrywarts nowadays, every kid who "chooses" to participate has to wear a helmet and a protective vest. Yes, it's embarrassing, but it's not as embarrassing as a rattail, face paint, or a pint-sized Cleveland Cavaliers jersey. Still, regardless of what your mind tells you about mutton bustin', your gut is probably telling you it's something not to be missed – like a donkey show in Tijuana, a hash house in Amsterdam, or the grotto at the Playboy Mansion. Yes, you're going to feel a little dirty and somewhat morally compromised, but in the end you'll have a memory that will last a lifetime. OK, ready? Time to go make some memories. Take a trip out to the Travis County Expo Center this Saturday for Rodeo Austin. Get your fill of carnival rides, funnel cake, Texas music, and the heady aroma of hay, manure, dust, and cotton candy! Mutton bustin' starts at 7pm, so beer up early.