Letters at 3AM: Some Kind of a Man

After a certain age, there's no avoiding how death is a permanent part of life 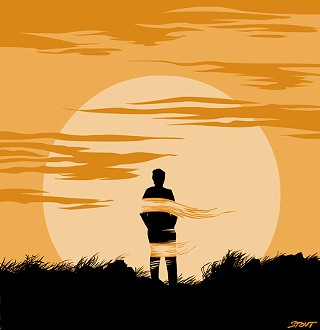 You get to an age when people die. They start dropping like leaves. It's as natural as the wind.

I moved to Lubbock in 2004. Since then, once a year, sometimes twice or thrice, someone significant to me has died. This pace won't quit. You get to an age when there's no avoiding how death is a permanent part of life.

It's corny to equate a death with a sunset, but here in the Texas Panhandle it can't be helped. On these wide plains, you'll see clouds glowing myriad tints and shades from the western to the eastern horizon. Those to the east go gray first. Clouds overhead soon do the same, while the eastern clouds darken. Then those above go dark as colors still blaze westward, until an indestructible orange glares up from beneath the Earth's curve. That glow deepens slowly. You can't mark the exact moment night falls.

Every sunset is the same but different. If the sky is clear, there are no colors, just a steady dimming until the western horizon gleams. Or there are wisps of clouds here and there that color lightly or brightly before they fade. Or, in a storm, your horizons are unseen and there's only the darkening. Very like that, it's always the same death and it's never the same death.

It's always the same palette of feelings but never the same patterns. Wonder, grief, laughter, wistfulness, a flush of fear, a surge of courage. Rage, sometimes. Regret, sometimes. Sometimes a stubborn pride at simply having lived.

Dixie and George have been in my life since I was in my 20s and they were in their 50s. Anyone they liked could show up at their door and stay as long as need be, with no questions asked except, "How about some coffee? Or are you drinking tea these days?" Once, I stayed a year.

Dixie died just shy of her 91st birthday. I'd visited Dixie every October since 1976 at that strange big house in Clarendon, Texas, not far from the Salt Fork of the Red River. We loved to drive these plains 55 miles for our favorite piece of pie. We loved watching baseball. She'd say, "We don't care who wins, do we?" I'd say, "Nope." We'd laugh softly, in perfect understanding of something beyond my powers to explain.

I'm thinking of a day when I was 28. At the counter of a Clarendon diner, two seats away, a teenage boy kept glancing at me. Finally, he said, "You work with Dr. Howard, don'tchya?" I nodded yes. (Why Clarendon called George "doctor" I have no idea. It's not clear to me that George graduated from anything but the U.S. Navy.)

The boy asked, "Is it true about that bookcase?"

George hollowed out his house so the interior looked like the hold of a ship. In its center he built an A-shaped bookcase more than twice my height. If you wanted a book higher than your reach, you climbed at your own risk.

"Is it true Dr. Howard'll raise his hand and the book he wants springs out for him to catch?"

I'd seen other things. I'll give a for-instance, and cross my heart and spit, it's true: Ron was there in the spring of 1974. Ron was a classical pianist, so George rented a baby grand. Two men trucked it from Amarillo, and with difficulty, they negotiated the odd levels of George and Dixie's entryway. The stairway to the second "deck" was wide and uncommonly steep. George wanted the piano carried up that stair. The movers weren't happy. "Oh," George said, "we'll get 'er up." "We" were he, Ron, and I.

George had great physical strength, but Ron and I were what my Sicilian mother called "skinny malinks." I weighed maybe 125 pounds, and Ron weighed not much more. George took the top spot, Ron and I the bottom. That piano's weight would be borne by us skinny malinks.

George lifted his end and started up the stairs; we took our end and followed. I promise you that piano was as light as an empty suitcase. No weight at all. We just kind of glided it up the stairs, Ron and I, gawking at each other, feeling a bafflement on the edge of fear.

George could do that kind of thing. He called himself a psychic. I'd say more like a wizard. (His last instruction to me was that I remember something I once quoted to him: how Merlin said to Arthur, "Do not dishonor your feast by ignoring what comes to it.")

Whatever George was, he was also a lot of trouble.

Was George an honest man? That depends on how you define "honest." He saw a movie during World War II, Mr. Lucky, in which Cary Grant says: "Never give a sucker an even break, but don't cheat a friend. I believe in that. I live by it." George took those words to heart. He relished chicanery for its own sake – for the fun of it – and he kept in practice, right to the end. He was good to me. To some, he was anything but.

He never claimed to be moral in any generally accepted sense, but George wasn't a hypocrite, and he never hid his rascality. "I'm a rascal," he'd declare, "but I'm an effective rascal."

He told me more than once: "You know the rules: No rules!"

There was a lot to admire in that, and a lot to beware of.

Twenty years ago, the doctors gave George six months to live. He wrestled with his cancer all this time, like Jacob with the angel: "I will not let thee go, except thou bless me." It sort of blessed him. It made him think deeper.

Dixie died a year or two after their strange house burned down. (It was struck by lightning in a rather complicated fashion. That's another story). To put it gently, their marriage was unusual. I'd ask why she stuck by him. "Oh," she'd say, "he's" – a pause – "interesting." (The first time she saw him, she turned to a friend and said, "That is the man I'll marry.")

Butch, Adrienne, their son Rory, and I – during this last cold snap, we drove up to say goodbye.

Cathy was caring for him 24/7. He'd taken no food in 14 days. As we walked in, he said from his bed, "I was scared you wouldn't make it." That's the one time I heard George Howard admit he was scared of anything.

I wasn't wearing the hat I'd worn when last I visited.

"Where's your other hat?"

"George, I try to wear just one hat at a time."

His body was mostly gone but his mind was all there. He and Butch discussed life and death in their brilliant, abstract fashion. Me, I get less and less abstract as I grow older. George knew. He said, "You have to interpret it as it fits your nomenclature, 'cause none of it makes any fucking sense."

We laughed. He said: "Diseases do not come to us. We go to them."

Butch and Rory sang. We spoke some more. A timeless time passed. Suddenly George said, with a smile in his voice: "Give me a hug and leave."

Funny, the words you'll never forget. That was no special sentence. But from that man, at that moment, those words were a precise and elegant finish to a long, exceptional story: "Give me a hug and leave."