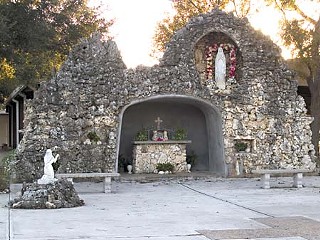 The Frydek Grotto commemorates a miraculous event and serves as a cohesive element for a small farming community south of Sealy.

There isn't much left of the community of Frydek except St. Mary's Catholic Church and a few houses surrounded by fields and pastures. Established in 1895, the town was probably named after the Moravian city of Frýdek-Místek. At its peak, between 1901 and 1906, it was a modest settlement with a cemetery, post office, school, store, dance hall, and church.

Ethnic Czechs from northeastern Bohemia began pouring into Texas in the early 1850s. First a trickle of landless peasants came for the inexpensive land, and then a flood that included merchants and intellectuals continued into the 1930s. Many of the immigrants settled on farms in the area around Austin, Lavaca, and Fayette counties and throughout Bell and McLennan counties. Many of the original families still have representatives living in the area.

Individually self-sufficient, as a group the Czechs came with a strong sense of family and community. They formed fraternal organizations like the SPJST, known in English as the Slavonic Benevolent Order of the State of Texas. The organization, based out of Temple, still provides insurance to its members. In the beginning, these organizations served as social clubs, provided assistance to immigrants and one another, and provided protection from hostile Anglo-Americans.

Grottoes are natural or man-made caves, associated in religious symbolism with the cave that Jesus was buried in after being crucified. One of the most famous in the U.S. is the Dickeyville Grotto in Wisconsin. Texas has well-known grottoes on the grounds of Catholic churches in Windthorst near Wichita Falls and Hostyn south of Schulenburg.

Construction of the Frydek Grotto began soon after the end of World War II. Of the 65 young men from the parish who served in the war, all of them returned. It was a very unusual statistic for any community. In celebration of the soldiers' return, the veterans and their families traveled to the Texas Hill Country to get limestone rocks that looked like parched bones or were pockmarked with weathered holes.

Since 1949, the church has celebrated the last Sunday of April as a day of remembrance and thanksgiving. The men of the church make sausage, the women bake kolaches, and everyone enjoys the polka bands and festivities. The public is always welcome to join in the fun.

To learn more about Texas' Czech immigrants, visit the Texas Czech Heritage and Cultural Center at the fairgrounds in La Grange. For more information, call 979/968-9399, 888/785-4500 or go to www.czechtexas.org. 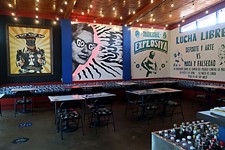