A look back at a 50-year career and Steven Tyler's big, fat lips 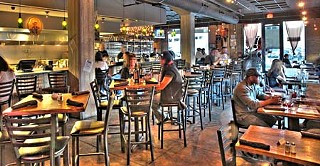 Max's Wine Dive, with locations in Houston, San Antonio, and Austin, is preparing for world domination. (Photo by Seabrook Jones/www.juicythis.com)

AMERICAN IDLE I have never enjoyed American Idol – my mom watches it, so I do drop in occasionally and spend a few minutes remembering why I loathe it so much. I did not miss the minimally talented Paula Abdul when she left – it was always a mystery to me why the dog-faced has-been was on there in the first place. And although I thought Simon Cowell's bitchiness could be entertaining, his pomposity always filled the room like a pervasive fart. Thank God Cowell and his man titties are gone. And Randy Jackson? The less said, the better. But the biggest travesty is always the fish-faced leprechaun named Ryan Seacrest, whose biggest rival in the "is she/he or isn't she/he" sweepstakes is Oprah Winfrey. But this new season is the most loathsome of all. The reason for Steven Tyler's fame has eluded me for decades. But now, surgically "enhanced," he is so repulsively ugly that looking at him, much less listening to him, is cruel and unusual punishment. Then there's Jenny-From-the-Schlock Jennifer Lopez, who owes her entire career to Spanx and Auto-Tune. The show has gone from semirespectable to ridiculous. Even the premise that the show reflects a "democratic" process is negated by the fact that anyone can vote as many times as they'd like. That's not democracy; it's hypocrisy. Though some of the contestants seem to have an inkling of talent (unlike the judges), many subscribe to that hideous Mariah Carey-type trilling and wailing and should be taken to the vet to have their vocal cords neutered. The only other vocal option seems to be cuntry. I mean, country. Ever since Carrie's Underwear "won" a few seasons ago, AI has been inundated with Shania Twain and Keith Urban wannabes. Many of the contestants that choose this approach are about as country and homespun as, well, I am. But, then again, clearly I am not the target audience.

NOTABLE It's time again for Le Garage Sale at the Palmer Events Center, Jan. 29-30, featuring retailers and designers including By George, C.Jane, Leighelena, SoLa, and St. Thomas. More info can be found at www.legaragesale.net... Scenester John Gomi is back at it again with the bimonthly Beat Down Happy Hour at Club de Ville. Check out Gomi, Eddie Torres, and guests spinning featured tracks from their long-running music/culture blog at www.beatimprint.blogspot.com. Billed as a "new music & open source listening & drinking experience," Beat Down occurs again on Friday, Jan. 28.

TO THE MAX It seems clear that Max's Wine Dive is preparing for world domination, and we're not just talking about wine. David Dewhurst just held his inauguration ball at this unique combination of glamour, glitz, and gourmet comfort food. Executive Chef Jean Pierre "JP" LaCoste from Louisiana is perfecting his menu, adding new delicacies such as Wild Boar Pasta and a truly divine brownie. Max's fried chicken is already famous ("Fried chicken and Champagne? ... Why the hell not?!" is its slogan), and the rest of the menu (see www.maxswinedive.com) is mouthwateringly delicious. Max's is in the process of adding approximately 6,000 square feet of additional special event and party space, including the forthcoming Wine Lounge as well as Max's Cellar, effectively doubling the dive in size when all is said and done – just in time for South by Southwest.

MOVIE MATH The King's Speech = (My Fair Lady x The Prince and the Pauper) + (The Elephant Man ÷ Temple Grandin).

DRY, DRYER, DRYEL I know, I know ... I can get excited about the most mundane things! But do I love the new, improved Dryel at-home dry-cleaning products or what? I use them on everything from sweaters to bedding, and they perform wonderfully. In addition to the dry-cleaning system, there is a travel-sized stain removing pen, a spray for treating lightly soiled dry-cleanables, and a wrinkle-releasing spray. Dryel and a little effort can radically extend the life of your clothes. And in this economy, that means something.

R.I.P. THEONI One of the most influential costume designers of the past 50 years, Theoni Aldredge has died at 77 ... according to IMDb.com (which lists her year of death as 2010), or 73, 78, or 88, depending on other sources. The designing force behind numerous movies and Broadway shows, her stock-in-trade was not necessarily creating showstopping costumes but creating costumes that were so perfect for the characters that the viewer might not even notice them. Married for more than 50 years to actor Tom Aldredge (currently of TV's Boardwalk Empire), She was incredibly prolific. Her film work includes Eyes of Laura Mars, The Rose, The Great Gatsby (for which she won an Academy Award), Network, Moonstruck, and The First Wives Club. On Broadway, she was responsible for the looks of Hair, 42nd Street, La Cage Aux Folles, A Chorus Line, and Dreamgirls, among so many others. Her legacy will live on for centuries.