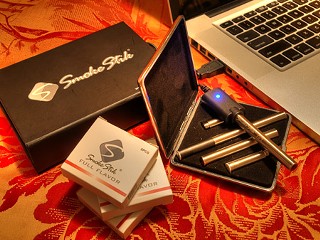 The e-cigarettes charge up through a USB port and are ready for your non-smoking pleasure. (Photo by Seabrook Jones/www.juicythis.com)

A SMOKING NEW ERA While I was hanging out with some famous movie-star types recently, I was shocked to see them light up cigarettes in a crowded bar. Always respectful of the privileges that wealth and fame can bring, I thought, "Wow, not even I have the nerve to light up in a bar." I watched as the star's wife took a drag, then placed the cigarette in her purse. I hoped that her purse was lined with asbestos – I had horrifying visions of it bursting into flames, reminding me of the old story about Tallulah Bankhead at Saint Patrick's Cathedral: When Cardinal Spellman came down the aisle wearing purple and gold vestments, solemnly swinging a smoking censer, Bankhead reportedly said, "Dahling, I love your dress, but your purse is on fire!" My fears were all for naught, however, as it became evident that this glamorous couple was smoking these new electronic cigarettes. I'd heard about them before, but had no clue how they worked, how they felt or tasted, or how much they cost. His resembled a real cigarette – white with a tan filter and a red LED tip that lights up when you inhale – but hers was a sleek platinum-colored model with a purple LED tip. I was mesmerized. They both let me try them, and lo and behold, they tasted great. You can smoke these anywhere without fear of reprisal (except on airplanes, which have ridiculously but summarily banned them). It was like the good ol' days for smokers, when you smoked just about everywhere: gas stations, grocery stores, theatres, doctors' offices, elevators .... The e-cigs that I "smoked" were SmokeStik brand (www.smokestik.com), among the highest rated. What a thrilling surprise when a Christmas package arrived from my high-glam friends containing a large assortment of SmokeStik products. Ha-ha! The SmokeStik website relies on Katherine Heigl for a celebrity endorsement, but if the company had any indication of how my friends like their products, it'd have my friends' faces plastered all over its website. But for the time being, SmokeStik could settle for an endorsement from me: I think these e-cigarettes are incredible. The barrel of the "cigarette" is a rechargeable battery screwed onto a "filter" containing a glycol solution of varying amounts of nicotine. As you inhale, the air passes through a minivaporizer, allowing you to only inhale the nicotine vapor. There is no smoke involved; nothing burns. Upon exhaling, what comes out is an odorless, harmless, water vapor. There is no secondhand smoke, no ashes or cigarette trash. This gadget delivers the essence of what a smoker wants out of a cigarette without all the toxins and has a USB charger that hooks up to your computer. Brilliant. The stylish appearance of the SmokeStik is also a big plus. I haven't smoked a real cigarette in almost three weeks. I don't have to bundle up to run outside and smoke in the cold; I can lie in my Craftmatic adjustable bed and watch a movie while smoking a cigarette. I can smoke a cigarette immediately after eating. I can even control how much nicotine I take in by changing the filter. Some filters contain no nicotine at all for those that still have the compulsion to feel like they're smoking but without the chemical effects.

PROOF THAT TWTTERING IS DANGEROUS Well, the story we've only whispered about before is about to play out in the media. Austin designer Dawn Simorangkir née Denton (also known Dawn Younger-Smith – husband Mark Younger-Smith is Billy Idol's former sideman) is about to go mano a mano (Twitter a Twitter?) against none other than the hatchet-faced Courtney Love in a court of law – L.A. law to be exact. It seems that the former friends had a falling-out over payment for clothing designed by Simorangkir's Boudoir Queen company for Ms. Love (aka "Her Heinous" online), and Courtney took to Twitter to launch a wave of disparaging comments. Can the things Love wrote on Twitter and other online platforms be construed as defamation? And can Twitter, Facebook, MySpace, and other online communities be held to the same libel laws applied to news media? This is the first high-profile lawsuit holding a celebrity accountable for allegations made on Twitter. According to The Hollywood Reporter, Love's tweets allegedly branded Simorangkir "a drug-pushing prostitute with a history of assault and battery who lost custody of her own child and capitalized on Love's fame before stealing from her." Funny, you can imagine those same words being used to describe Love herself. The trial is scheduled to begin Feb. 6.