From Bô to Fo' in one fashion show 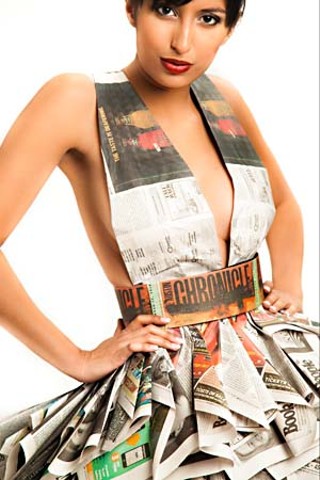 Not from the Ron King show is this fabulous fashion photo featuring Chronicle couture, designed and photographed by Romy John (www.romyjohnphotography.com). (Photo by Romy John)

BÔ NO MO' The Ron King fashion show at the Four Seasons ballroom on Sunday, Dec. 12, was a highly anticipated event. With the opening of his grand and glorious Ron King Salon in the new Four Seasons Residences, King had salons all over town gnashing their teeth and wondering how he snagged such a great opportunity. As one of the priciest salons in Austin, it wasn't really a surprise. But what was a surprise was their big fashion show that concluded a weekend of opening festivities. The PR for the event was great, but no one was prepared for what could politely be described as a clusterfuck. The registration line was backed up all the way to the stairs and moved at a glacial pace. I chose to skip the line, as did dozens of others. It was indeed a dressy event, but after spending more than 11 years on this social and fashion scene, I'd never seen most of these people before. There was more bleached-blond hair in that room than on Jerseylicious. Another member of the fashion press asked, "Who are all these people?" "Hair people," I said. "A different breed entirely." Many were out-of-town hairdressers who had been taking classes at the salon that day. Some were clients; some didn't seem sure why they were there. But who cares? We were going to see a Real. Big. Fashion. Show. Or were we? The reception area was uncomfortably crowded and strangely uptight. The open bar turned out to be a single drink ticket, and no one knew anything about the seating arrangements. Despite what seemed to be shaping up as a disaster, Ron King's staff was calm and polite, giving out the best information they had and gingerly handling the restless crowd. They deserve an award for that – especially the one who plucked me out of the crowd and led me to my front-row seats (I arrived with Kappie Bliss and Ana Reign but sat with Connie Bakonyi and Rusty Irons – she of the Tina Turner legs). Seating became a hot issue because there were no reserved seats. In fact, when I left my seat to say hello to a friend at the back of the room, I returned to find I'd been replaced by what appeared to be a peckish hairdresser from a foreign county who bitterly let me know that I was ruining her night. I didn't tell her what I thought, but how could the night be ruined when it had hardly begun? Out first on the runway was a L'Oréal presentation with models in faux-nude, jeweled bodysuits and faaabulous wigs. It was a brief but intriguing opening set. Then the man of the night himself, Ron King, came out. I know Ron, and he is an intensely ambitious man – which is not a bad thing at all – but he came off that night like Anthony Robbins, with an almost too-polished, professional-inspirational manner that can seem arrogant. He had every reason to be proud that night; this is a very big step up for him from the chic but relatively humble Bô Salon on SoCo (which he still owns) to an eponymous, drop-dead-chic facade in the Four Seasons Residences. But I digress. The fashion show, the real reason we were there, began. Models wearing clothing by New York designer Thuy (pronounced "twee") came out. I was completely underwhelmed by the clothes. Yes, some were pretty enough, but most looked like that made-for-TV kind of fashion that's so prevalent among young designers. Personally she was very sweet, and I was enchanted by the little Jack Russell terrier she carried with her, since one of our family's furry little friends, Campbell, a 3-year-old Chihuahua, had died that morning. So we bonded, but not over her designs. OK, the hair. The lighting was great; the sound was fine; all the elements of a good show were there. But the hair – I wanted to see glamour, I wanted at least to see variety, but I was sadly disappointed. With two exceptions, the models all had the same hair: long hair rolled up into a page boy, secured with visible bobby pins. The bangs were swooped to the side and secured with visible bobby pins. Then there were ratty pieces of hair pulled out, sticking out here and there. What. Ever. It looked like they'd put the models in a darkened room with a box of bobby pins and told them to get to it. The show was to celebrate the grand opening of the grandest salon in town, and we got dreadful hair. Where was the sense of showmanship and drama that might have shown off King's real skills? The kind of hair that was shown is that sort of standard avant-garde hair that we saw on the runways of Ann Demeulemeester or Yohji Yamamoto in the Nineties, but it worked for them. It certainly did not work with Thuy's designs. It simply didn't look like hair that you'd want to spend hundreds of dollars on, especially since it appeared to be engineered to look like you did it yourself. Toto, I don't think we're in Bô anymore. The very best part of the show? Ron King gave a scholarship to an American YouthWorks student.