Stephen hijacks a pair of Quaids and spots a Dick 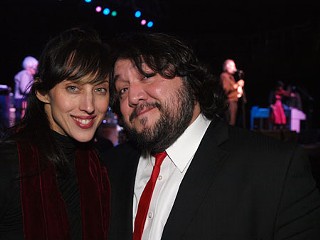 Patricia Vonne and Nakia Reynosa at the Sims Foundation Bash, which featured so many of Austin's brightest talents under one roof to raise money for mental health services for our musical community. (Photo by Seabrook Jones/www.juicythis.com)

NOT YOUR TYPICAL THURSDAY Well, I've never been to a party at a dentist's office, but since I'd been there earlier in the day for an appointment, I thought I'd drop by Authentic Smiles Dental Studio (www.authenticsmiles.com) for the All Wrapped Up toy drive (I donated a Barbie, naturally), plus a concert by the dreamy Sally Allen and a holiday sale featuring RubyPearl (her slip dresses adorn so many Austin women), Plain Ivey Jane (which resells overstock from stores such as Anthropologie at very affordable prices), Scentsy (a new twist on room fragrance), Bella Salon, Beyond Tradition, Eliza Page, and Tinkerwendy. Authentic Smiles' founder Shane Matt (the rock & roll dentist who helps provide services for the SIMS Foundation) and the most glamourous Samera Owhadian magnanimously presided. I met a dazzling beauty named Mashad, and after the party, she and Dr. Matt accompanied me to the W Hotel opening (which we crashed, but we were welcomed incredibly graciously anyway). The hotel was packed with pretty people, and we got a tour of the tres glam facilities. We then had to hurry over to the Phoenix for the Larissa Ness preview party for her upcoming CD Tease. Larissa is an especially dynamic performer; I've never seen her perform anything the same way twice. Expect to see her name everywhere as her popularity jumps by leaps and bounds every day. The Phoenix is the old Pangaea space redone with bordello flair (I was right at home), and management told me about future plans to bring some very serious fashion to Austin. We wait with bated breath. Then we passed by Antone's, where we ran into Nak Armstrong and Amy Edwards outside. We were still hugging and catching up when Lea and Blake Buffington came out. Blake's sister, the impossibly beautiful Kimberly Buffington Quaid through the door, and we threw our arms around each other (she and her husband, Dennis, have Christmas stockings in their home that I designed and made for each of them and their children). Kimberly ushered me upstairs to see Dennis, who had just performed with his band (how the hell did I miss that?). I hijacked them and insisted they accompany me back to the W. Showing up at the W opening with Kimberly and Dennis Quaid is a columnist's wet dream. Needless to say, the W was very pleased to have Dennis, but of course catering to stars is the W's stock-in-trade. Seeing so many old friends, great performances, and great performers crystallized my holiday spirit and melted even my curmudgeonly heart.

SHOP TALK After giving a so-so review to Beyond Tradition's initial offering of menswear (I thought Estilo did it better), I must say resident fashion director Phillip Solomon upped the ante and brought in looks that are unique to Beyond Tradition. The leather bags and accessories by Hammitt are sensational, but it is the menswear group by Moods of Norway (www.moodsofnorway.com) that is so fresh that it takes a moment to comprehend. Known for its many original details (like the tractor motif that appears on its label, linings, etc.), Moods of Norway donates a portion of their sales to support farmers in Norway. That may not be a hot issue here, but the clothes soon will be. Next-door neighbor Duo opened last week, carrying about 60% menswear. I haven't perused the clothes yet, but the more menswear the better, I say. Apparently they are part of AA Concepts Inc., which also opened Langford Market on the same block as well as Wish on the Drag. Speaking of menswear: Downstairs Apparel is having its Blues Xmas Party at the Scoot Inn on Sat., Dec. 18, with Mudphonic, Greyhounds, and DJ Orion, to benefit Caritas and Toys for Tots. Reduced admission is available with the donation of a toy or nonperishable food item.

CHRISTMAS DICK Check out my conversation with Andy Dick (austinchronicle.com/chronolog). I thought he was pretty vile until I spoke with him, so don't let the public scandals be all you know about him. See him perform his Stocking Stuffer Music & Comedy Show on Saturday, Dec. 18, 9pm at Emo's.

OOPS I said it was Dancing With the Stars Austin winner Charmaine McGill who broke her leg last year. I'm possessed. It was Stacey Hammer. Then I had the nerve to identify Stephanie Coultress as Maria Groten and vice versa in the photo. Apologies to all four ladies.