Any friend of Edith Head, Algernon Moncrieff, and Vajazzling is a friend of Your Style Avatar 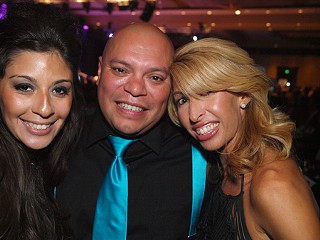 Co-Chair Maria Groten (l); our next mayor, Mike Martinez (center); and Estilo's Stephanie Coultress were among those who made Dancing With the Stars Austin truly fabulous. (by Seabrook Jones/www.juicythis.com)

DANCING IN HEAVEN How can you not give a "10" to every one of the participants in Dancing With the Stars Austin? This is the fourth year for the Center for Child Protection fundraiser – one of the Top 3 most glam events in Austin (it raised more than $900,000 for the center). My favorite part is the clothing (wait, I'm supposed to say my favorite part is helping children). All the guests know how to dress: gowns to die for and jewels that would make you consider a career as a cat burglar. Fortunately, it was cold enough to wear fur. There was a jovial fierceness among the competitors, but all of them took it very seriously, including Charmaine McGill, who broke her leg last year during rehearsals but returned this year to win the big trophy. Amy Rudy, David Garrido, and John Hogg danced their hearts out alongside Mickey Klein, Stacey Hammer, Joe Ross, Wendy Topfer, Kristie Dennis, and our next mayor, Mike Martinez, whom we witnessed performing CPR on a gentleman who collapsed in the VIP lounge. Next mayor and superhero.

QUOTE OF THE WEEK "If I am occasionally a little overdressed, I make up for it by always being immensely overeducated." – Algernon Moncrieff in The Importance of Being Earnest

TCM'ING I've spent seemingly endless hours watching TCM – a treasure trove of Hollywood fashion. I've been especially focused on designer Edith Head. She won eight Academy Awards – more than any other woman has – and was nominated every year from 1948 through 1966. She reflected the eras she worked in from 1924 to her death in 1981. Her clothes weren't always the most incredibly original designs, but she approached design much more analytically than emotionally. Incredibly, she knew just how to calculate and manipulate emotion through her work. Exhibiting little skill and no experience, she used "borrowed" sketches to land a job as an artist at Paramount where she worked for the next 44 years. She created glorious ensembles for Mae West, Barbara Stanwyck, Rita Hayworth, Marlene Dietrich, and Elizabeth Taylor. Her costumes were dazzlingly iconic: Gloria Swanson in Sunset Boulevard, melding both the fashions of the Twenties and the Fifties; Grace Kelly in To Catch a Thief; and Bette Davis in All About Eve to name a few. Lucy Gallant features brilliant actress Jane Wyman founding a Texas department store suspiciously akin to Neiman Marcus. The highlight of the movie is Edith Head appearing as herself in a lavish Neiman's-worthy fashion show. The black dress that Audrey Hepburn wore in Breakfast at Tiffany's is legendary, but it is not Edith's work. She was not above copying someone else's work (in this case, the work of Givenchy). But at least she copied the best. What an incredible legacy she's left us.

POST-HOLIDAY A member of my research team tried out a new product called the Mother Tucker – a horrible name for a very good product. It is compression shape-wear particularly designed to help new mothers firm up after childbirth (though it certainly has appeal for anyone who wants to look firmer and slimmer). A tank designed with bands of extra compression in strategic areas, the MT certainly does what it promises ... though it also flattens the bust, which may or may not be a plus. Our research assistant suggested that the company, Belly Bandit (www.bellybandit.com) – another unappetizing name – develop a variation cut out under the bust. Though the bands-of-compression technique isn't new, the Mother Tucker is among the very best of it's kind.

WTF? It's called Vajazzling. Don't make me talk about it. Okay, I will. It's the process of having your fuzz-free ladyparts paved with Swarovski crystals. I know, the visuals are disturbing. But if you refuse to imagine what that looks like, can you imagine what it looks like with panties on? All those little bumps? Please. I can't imagine who might want to explore any further than that – talk about hidden details. The whole thing raises more questions than it answers. Who, besides a stripper, would require such elaborate ornamentation? And what circumstances would warrant this treatment? Your wedding? Your coming-out party? Your first sex tape? And what does it feel like for you and your partner? And does the partner have to wear sunglasses to perform oral sex on you? The answers to these questions lie with the owner of depilatory salons in New York and Palm Beach, someone named Cindy Barshop, who appears to be vetted for Real Housewives of New York. Need we say more?