Your Style Avatar runs down what's trashy in the ATX 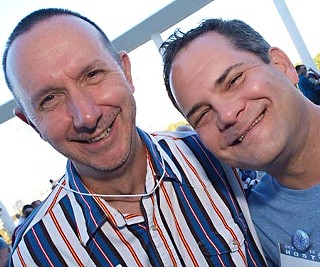 Bob Dailey and Mark Erwin mug for the camera after helping make OctoTea the best yet. (Photo by Seabrook Jones/www.juicythis.com)

SPEAKING OF DISTURBING AFFAIRS I'm not sure exactly why, but I received a couple of Facebook invitations to events that I'd rather chew broken glass than attend. One was for something called First Fridays: A Pure Elegant Affair 2k10, and the other was for Gods & Goddesses: Greek Affair 2K10, 2. WTF? What's this 2K10 shit all about? It's so pretentious, like people who say "ATX." Those people are just way too cool for me. The Pure Elegant Affair features poor grammar and a bikini competition. But nowhere on the invitation that I received does it mention what time the elegance starts. Perhaps the promoters don't know what the word means. And the Gods & Goddesses: Greek Affair? I have a nagging suspicion that the number of actual gods and goddesses attending will be very slim. I also have a suspicion that the use of the term "goddess" is more closely related to the "goddesses" in Showgirls than any sort of deity. I haven't sent in my regrets yet – because I'm afraid if I respond to the invitations then they'll keep sending them.

OCTO! OCTO! I dressed all black and sparkly for last Sunday's OctoTea fundraiser for AIDS Services of Austin – perfect for a day-to-evening event. If you're Liberace. Every year, attendance grows at OctoTea, and every year it raises more money than the year before. The terrace of the Long Center is so fabulous at night, but I miss Cliff Redd terribly and am aware of it every time I go to the Long Center. But I didn't dwell on that – the charms of OctoTea were far too great. The formula is tried and true, as is the caliber of the event. It is one of the single most high-velocity parties on the charity circuit, and because ASA is a health-related nonprofit, the party draws a delightfully broad spectrum of supporters – tons of people that I never see anywhere else but OctoTea and ArtErotica. KVUE's Tyler Sieswerda emceed, the cast from Zach Theatre's Rent performed to the lathered-up crowd, Roland Belmares worked the turntables, and the Octopus Club outdid itself once again by putting on a hell of a party.

BIG BIGGER BIGGEST A little Austin start-up has just gotten a lot bigger. Big Shoes (www.bigshoes.com) has moved into its new location at 700-B S. Lamar. Carrying men's shoes sizes 13 and larger, Big Shoes proves that just because you have feet like skis doesn't mean you can't find fashionable footwear. Knowing a thing or two about the limitations of standard shoe sizing, I am acutely aware of what is out there. Big Shoes has put together a collection of stylish athletic shoes and surprisingly affordable dress shoes.