Page Two: That Was Then

The case for improving the quality of strategic political fictions "It's only a whimsical notion

To fly down to Rio tonight

And I probably won't fly down to Rio

The election simply confirmed that the contradictions between what citizens say they want and what they seem to really want are so pronounced that American politics demonstrate the aesthetics of silent-movie play-acting more than ideologically loaded political positioning.

During my freshman year of college, I was hanging out in a dorm room with a number of other students. Mostly we were talking and listening to music, but at some point one of the roommates handed me a book. It was Gods' Man by Lynd Ward, a novel told entirely in woodcuts, published in 1929 – almost a half-century before Will Eisner used the term "graphic novel."

Held down by neither gravity nor negativity, I find myself, as almost always, anchored by small but persistent hopes. Counter to these consolations run the current fashion trends – the artificially cheap national discount-chain sale on abandoning hope, accompanied by the more penny-ante convenience-store degradation of same by opinion-addicted, thought-averse lay pundits. This obvious and too generally accepted sense of mundane despair asserts a vision of the present as beaten flat and colorless, lacking history, context, and humanity.

Reading Gods' Man, I was completely sucked in by the art, the story set in a world of absolute and rigid morality. Seeking success, an artist travels from his rural (natural) home to the city. There he finds fame, but it is in exchange for and inextricably tied to losing his soul. The city and its citizens are so polluted and polluting that he has to flee back to nature in order to have any real meaning in his life. This return to purity gives him a context in which to find love and start a family. The city is such a malevolent corrupter of nature that, once one is touched by it, there is no escaping its poisonous cancers.

In many ways Gods' Man is an immediate, though far more pessimistic, relative of F.W. Murnau's stunning silent film Sunrise, released two years earlier. It is not just that the works tell such insistently moral tales but that they are mostly stripped of baroque affections and complicating nuances. Even though one story offers hope and the other provides none, both are stories of the purity of innocence and the perfect impurity of corruption. The remarkable artistry of the film and the book finds their narratives complemented by the absolutely inspired and almost unimaginably ambitious use of the medium. Whether the story argues for hope or insists on despair, these works by their existence are transcendent, humanist, and inspiring.

The pessimistic worldview that we are indeed living in the worst of times is beyond lightweight: Though dour, it is void of substance. The conviction that the sky is falling, shared by so many despite radically different faiths, ideologies, and philosophies, in and of itself is not proof that it is actually falling. Regardless of the completeness of the case made for how perfectly the details of the present align with those laid out in the direst of biblical prophecies, nothing is validated. This catalog of evidence does not prove that God has abandoned us, because the underlying modes it relies upon are all cockeyed. Belief does not trump nature. King Alfred the Great long ago refuted the notion that human distinctions and perceptions actually influence the tides. 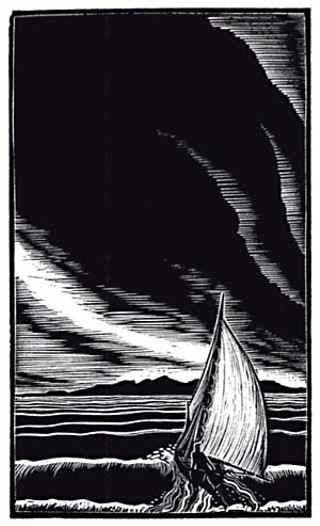 The extent of our despair, even with the certainty that a spiritual or even nonspiritual Armageddon is at hand, is not just irrelevant but meaningless. There is little real difference in validity between a shared massive pessimism that insists on impending doom and the most expansive, arrogant sense of self as the center of the universe. If anything, it is simply that if the former case proves untrue, the disappointment would be far less devastating than it would be if the latter proves so as well.

In 1949, Arthur C. Clarke published "History Lesson," a short story about aliens arriving on this planet after it has been completely devastated. About all they find is a can of film. They watch it, wondering about the odd creatures that once inhabited this planet. It is a Mickey Mouse cartoon.

The elections again demonstrated that the American people don't distrust only the government and one another but all information beyond their own opinions. This should come as no surprise, given that, rather than being geographically or racially defined, this country's creation flowed out of grand visions derived from deeply held but clearly personalized worldviews.

The great American conflict is between personal freedom and community responsibilities. Absolutely interwoven, they often and regularly are defined independently of each other by champions of American exceptionalism and completely ignorant constitutional "experts."

Being an American shouldn't and doesn't start in those easy spaces where too many act like snubbed teenagers as they whine about their rights being limited meanwhile ignoring all accompanying responsibilities.

Lynd Ward was an American artist whose main work was in book illustrations; he published six beautiful, innovative, and influential graphic novels between 1929 and 1937. The first was Gods' Man, which was published just weeks before the stock market crash but went on to be a bestseller. It was followed by Madman's Drum, Wild Pilgrimage, Prelude to a Million Years, Song Without Words, and Vertigo.

This is a time of pick-and-choose American patriots who spend way too much time worrying that most of the rest of us have not only lost our souls but are busy selling our country short. Any deal that looks too good to be true usually is a con, but rarely does it lack investors/believers. The same is true in politics. Placing trust in what voters say is misplaced. They may claim to admire straight-shooting candidates who do not pander to them, but they consistently elect only those who pander unconditionally.

Voters are really wowed by professional fictioneers, liars, and fantasists, who offer dazzling, Disney-esque visions of a great, happy American government that can always cut taxes and expand and improve services without incurring costs. Only chumps and losers address actual problems and complicated issues.

I've come to know and know of far too many who regularly and happily vote for Mickey Mouse. I know way too few who passionately insist that personal sacrifice, unselfish commitment, and upholding the rights of those you disagree with the most are critical to our role as citizens.

Outside of the quite beautiful original editions, they have mostly been available in reprints, at best unworthy of the originals while at worst seeming deliberately designed to mar the books' artistic vision. In 1972, the usually reliable Harry N. Abrams Inc., an outstanding art book publishing company, produced Storyteller Without Words. This book included all six of Ward's novels, plus a collection of illustrations he had done for other books. Unfortunately, the layout made the book look like the result of a deranged Dadaist collective's art-on-art attack.

Now Again and Then Beyond

Expect neither fascism nor reform, the people's revolution nor the triumph of the New World Order, neither the vast government trimming promised by libertarians nor the terrible Marxist takeover that right-wingers have long insisted is coming. Expect less governing – but that does not mean less government. The goal of the Republican Party cannot be to do less than they did during Congress' last term, as reducing nothing to less is impossible.

Both parties' ambitions will be to govern by doing as little governing as possible, hoping to appear as though they are competently governing while not governing at all. Instead, there will be partisan celebrations of pomp and circumstance matched to precious little effective legislation.

The good news, maybe even the great news, is that in October 2010 the Library of America published Lynd Ward: Six Novels in Woodcuts, giving the work the quality presentation it deserves, each one with a new chronology of Ward's life and an introduction by Art Spiegelman.

If elections are won by misleading subterfuge and artful fiction, can't we at least upgrade the quality of the art from Mickey Mouse to Lynd Ward?