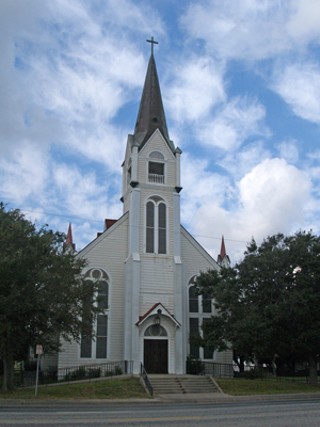 Mission Nuestra Señora del Refugio lasted 30 years before it melted into the coastal plains on the southern edge of the town of Refugio. The mission has the distinction of being the last Spanish religious outpost established in Texas and the last one to be closed.

In many ways, Mission Refugio was typical of the 26 Spanish missions built in the territory during the 1700s. The missionaries came to the New World to spread Christianity to the natives and expand Spain's sphere of control. The pioneers' influence tended to be much more far reaching than just religion and politics. Along with the settlers and the army, the Catholic priests also introduced European livestock, plants, medicine, and tools to the region.

The Karankawa Indians persuaded the Spanish to settle the mission near the coast at first, but the site offered poor farm land. The Franciscan priests then tried to build their mission at the confluence of the San Antonio and Guadalupe rivers near present-day Goliad at a place aptly named Mosquitos Creek. The third move was a charm, and the site on a bluff overlooking the Mission River took hold, albeit tenuously.

Despite numerous hardships and after four years of hard work, the padres dedicated their new stone church in 1799. Mission Refugio probably reached a peak of about 200 inhabitants in 1804. In 1830 the Mexican government closed all its missions in Texas and the building was abandoned. A few years later, a traveling priest reported that the location was unfit for habitation.

Six years after it was decommissioned, the mission ruins were at the center of the Battle of Refugio during the Texas Revolution. Mexican forces overwhelmed and executed the 200 Texan soldiers encamped inside the crumbling walls. The loss fragmented Texas resistance and contributed to the massacre of the entire Texan garrison at Goliad the following month.

On la Bahía Road, a major thoroughfare from the coast to East Texas, the mission and Refugio were nearly destroyed by advancing and retreating armies. The Irish settlers who arrived after the revolution kept the Spanish name for their town and used the ruins as building material. In 1901 they built Our Lady of Refuge Catholic Church with stained-glass windows and a 105-foot steeple on the site of the former sanctuary.

Very little is left to see of the last Catholic mission in Texas except some foundation stones on the church grounds along U.S. 77. The state highway department did an archaeological excavation at the site in 1996 and located parts of the mission's foundation and cemeteries. Evidence revealed that the original stone chapel had a wooden roof and cherry-red tile floor. One of the mission's four bells survived in private hands until it was donated to the county historic museum at U.S. 77 and West Street.