It's the SoCo Social Club, 10 years after 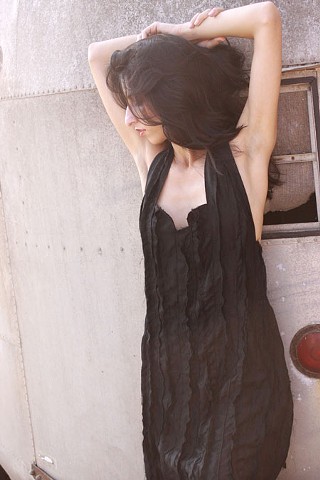 FRENCH DRESSING A couple months ago, when I heard that Gail was presenting her first fashion show in six years, I knew it would be unforgettable. Blackmail's Gail Chovan is not one for cranking out one fashion show after another with the same ol' look like some other designers do. Though her clothes always have a signature look, they are unpredictable and controversial. And her presentations of the clothes can be jaw-dropping, but they never eclipse the clothes themselves. I love that after 13 years, she's followed her heart and reinvented her retail outlet, Blackmail, into an atelier for herself. It took her recent battle with cancer to make it clear that she had to do what she loved, which was not selling other people's designs but creating and showcasing her own. I also knew that at some point she would ask me to help out with the sewing. I mentioned in late September that the show was a little more than a month away and asked to schedule some sewing time, knowing that she'd wait for a last-minute frenzy of sewing to produce the entire collection. So indeed, last Wednesday, she asked if I could come sew with her on Thursday ... for a Friday show. Well, of course I would. I arrived with a seam ripper and pair of scissors, but I should have known to bring a pup tent and overnight bag instead. Thursday gave way to Friday, and I stayed up all night sewing with Gail and her assistants, Gillian Courtney and Aaron Flynn, fueled by Jo's coffee and constant attempts to keep one another awake and alert. The sun rose on Friday, and we knew we only had a few hours to finish the collection. A couple of dresses were still sketches, but we sewed with the concentration of surgeons. Chairs and food were being delivered ... and we were still sewing. Show producer Neil Diaz showed up ready to whip the space into shape for the show ... and we were still sewing. The models, DJ, and stylists arrived ... and we were still sewing. And we continued to sew until we simply had to stop. It was time for me to transform myself from a greasy sweatshop worker into the fashion diva that Gail's guests would expect to see – a feat accomplished by my sister Margaret dropping off toiletries, clothes, and accessories for me. Back at the scene of the crime, guests were arriving, and Blackmail no longer resembled a war-torn sweatshop. The transformations were complete all the way around – including Mme. Chovan, who makes it all seem effortless. The show started on time, miraculously, and in 20 minutes, it was all over. That's the story of fashion: The laborious, blood-letting work of many people coalesces into one magical moment, and then it's over. The clothes, deconstructed and irreverent, were the stars of the show (rivaled only by Alejandro Escovedo's appropriate performance of "Thirteen Years"), but there was something else going on, too. With Alton Dulaney styling the accessories; Bryan Herbert doing hair; John Gomi as DJ; Samera Owhadian, Eva Anoma, Summer Lawson, and Cella Cardona modeling; and dozens of Gail's old friends and fans, it seemed like a reunion of the SoCo Social Club from 10 years ago, when First Thursdays seemed like private parties for Austin's most creative connoisseurs. It was an emotional finale – I thought it was just because I was so tired, until I looked across the runway and saw Gail's beloved friend Laura Cisneros sobbing as well. We knew what this show meant to Gail and, in turn, what it meant to us. (Also notable was the show's fabulous crystal jewelry by Pamela Tuohy-Novinsky of 2ETN and models Carrie Berry, Amy Cook, Shelby Carrothers, and Melanie Fioritto.) Later, in a daze, I drifted to Justine's with Dawn and Mark Younger-Smith (she of Boudoir Queen, he of Billy Idol), and on to Elysium and Barbarella until I had to drag myself over to Neil's apartment to crash for a few hours. Then it was an even madder rush to get myself ready for a Halloween date with Charlotte Herzele (dressed as a dead belly dancer), who took me to see her friend Mike McKinley (as his alter ego, Crawlene A. Long) hilariously perform "Aldonza" from Man of La Mancha at the 11th annual Dragoween, accompanied by costumer and performer Letta Meatcake). Eleventh annual? Why had I never heard of it before? Perhaps because it is a sober and sane event – and a lovely alternative for those that don't want to be crushed by the crowds of drunken revelers. Dragoween, with one brilliantly hysterical Broadway routine after another, is a benefit for Austin Roundup (www.austinroundup.com), a recovery group for the LGBTQ community. Sober and sane was exactly what the doctor ordered for me, though I'm still in recovery from the madness leading up to it.