Page Two: The Ways Sisyphus Had It Easy

My fingers are all in a knot

I don't have the strength

To get up and take another shot

And my best friend, my doctor

Won't even say what it is I've got"

Given that the Chronicle is almost 30 years along, it seems that this should allow those working on it enough breathing space for a thoughtful perspective on the paper, what it was, and what it is becoming. Since we publish weekly, however, there is really no such chance for contemplation. Instead, though the paper is well into its adulthood, everything remains jammed and jumbled together. It sometimes feels as though it was only yesterday when it all started; other times, it seems like it's been four or five lifetimes now (most of them not even mine). A weekly publication emanates from its entire history, but this does nothing to lessen the load of what must be covered every week.

Being lost in the middle of doing what we do, even this far along, crushes and mangles things, so that the work is only in the direction forward. Most of the time, one feels as if one is juggling fragments, hoping to fit them together in logical patterns. We don't really know with any sense of assurance, but we do hope and trust.

There are those who always know. Just ask them. They know what is the truth and what are lies (and those who so know never deal in the shades of gray that allow legitimate misunderstanding, mistakes, misguided beliefs, disagreements, etc. – it is always black and white, always truth and lies). The common, undetectable currents of life, the flow and unpredictability of its emotional constructs, ever-changing minute to minute, hour to hour, day to day, are like solid, immutable matter to them.

They live in hindsight, knowing what is going to happen because it already has. They look back and in retrospect are certain – certain which potential courses are predetermined to succeed and which will fail. They exclude information that doesn't fit their hypotheses. They don't do or know much, nor do they think very much about what they know. The quest is for simplicity not complexity, which is more easily achieved when one is less a participant and more an observer.

Some of that is about the Chronicle. I certainly wasn't sure we were going to survive until almost the end of the first decade that we published. Over the years, some have snorted at that claim, insisting that we had to know the paper would succeed both creatively and financially – and, further, that so knowing allowed us an arrogance and a condescension that has always marked the paper: This would not have been possible if, as we claim, we had been so torn up by the tumultuous, violent rushing of the rigid schedule of publication. We were so caught up and even more. But they know we knew.

In hindsight, they are always wise. After something happens, they always make it clear that they knew it would happen and would do so exactly as it did. This is the certainty of the uncertain, the pretension of the terrified that insists that there is nothing in their lives greater than themselves.

At the Chronicle, we're rarely certain of anything. Blindly pushing the giant boulder forward, no one really knew that we were heading up a mountain. When it rolled back on us, it just seemed another of the many dirty tricks encountered when our lives became the paper and the paper our lives. It was as if when we entered the world of producing the paper, we also followed Porky into Wackyland.

There were a number of years when I swore I would never wax nostalgic on the early years of the Chronicle, never look back on them with any warmth or kindness, since making it through them was so hard and brutal. Not only was there no guarantee of the paper's survival, but it actually seemed most likely that it wouldn't survive.

In the earliest days, when the Chronicle was biweekly, after the paper went off to the printer, it was hard to leave the office. Instead we'd lounge around without purpose, often just hating one another, but even a hostile social environment was better than going to an empty house to sit alone.

Given the biweekly schedule in that dull, tense atmosphere of not quite a truce among those of us exhausted by the prolonged hostility, we could and often did begin planning the next issue. There was more than enough time to figure out stories that needed to be done and assign them, then get them in from the writers and edit them. The biweekly pacing was erratic and confusing, but it did allow time to catch one's breath and consider.

"It is a curious emotion, this certain homesickness I have in mind. With Americans, it is a national trait, as native to us as the roller-coaster or the jukebox. It is no simple longing for the home town or country of our birth. The emotion is Janus-faced: we are torn between a nostalgia for the familiar and an urge for the foreign and strange. As often as not, we are homesick most for the places we have never known." – Carson McCullers

If the standard of measurement, the specifications by which to make judgments, are complete fictions, then how can any information that emanates from that standard be of any value?

Objects, social customs, and economic realities that are now no longer here but are in the past are always easier to love than what is around us now. The past can always be remembered not only as better than the present but also as better than it really was or possibly could have been. Obviously, the future invites similar unquestionable but entirely comfortable speculation, but being unknown does not allow it the sam, near-perfect majesty of the past. We celebrate the past and use the future as a boogeyman to scare or a holy man to bless while we are dismayed at and decry the present.

"Maybe when people longed for a thing that bad the longing made them trust in anything that might give it to them." – Carson McCullers, The Heart Is a Lonely Hunter

Many conservatives, Republicans, members of the religious right, and those who hate liberals in general and the Obama administration in particular have the bloodlust upon them as we approach the November elections.

Now there is the great lamenting of overtaxation from many Americans, especially those involved with the tea party movement. Yet how many of these same people, the majority of whom are described as conservatives, supported the U.S. invasion of Iraq? Those particular poll numbers might not exist, but when one considers that polls at the time showed as much as 80% of all Americans supported the invasion, it seems quite likely that tea party members constituted a disproportionate percentage of that group.

The conceit is that the U.S. citizen is overtaxed to support corruption, the many failures of inept government, and the enormous cost of misguided social welfare programs. The thinking goes that none of us really benefits from government, so it should be easy to cut its spending.

Looking at the annual U.S. budget, one finds that 23% goes to defense, 20% to Social Security, 19% to Medicaid, and 5% to interest. This accounts for 67% of the budget. Add another 17% in mandatory spending, and TARP is 4%, leaving only 12% for discretionary spending in the best interests of this country. Most of that money has already been claimed by one group or another. Discretionary spending makes for good headlines, but there really is precious little of it being done.

The mandatory spending is not for the social safety net, education, or an extensive social program. It is money for you and me, for our families and our children. Money paid in over the years. Cuts in social and education programs may save some in taxes, but they also cost many individual citizens plenty. During the Bush years, much of the budget that went to the social safety net was slashed. The amount was relatively insignificant, neither affecting the growing debt nor helping balance the budget. The cutting was a malevolent gesture by Republicans who hated social programs.

Something like 30% of citizens and 50% of households pay no income tax. Most of those who feel that they are being overtaxed in order to support their lazy neighbors as a socialist exercise in redistribution of wealth are just wrong.

After being elected, this generation of tea-party-proud and assertively naive Smiths will descend on D.C. like a vast emergency rescue squad or as an armed, shielded, and masked tactical police force ready to fix the situation. They'll be frisky, but expect them either to do nothing or to be more destructive than even the Bush administration. As for positive, substantive change, don't expect it. Not much will change, because most of what they claim needs changing isn't close to where they claim it is in the first place. Frustrated, the American constituency will then turn to the already known, re-electing President Obama.

30 Things: The Highs, The Lows, The Lists

Our 29th anniversary was Sept. 4, and after its passing, we decided to start celebrating our 30th year right away. It's all still evolving, but here's what we have going so far: We're republishing the first year's issues online every two weeks (that's how often we published for the first seven years), running vintage ads from some of our original advertisers in the paper and challenging readers to spot the old ad, and compiling lists of 30 notable (or laughable or lamentable) takes on the Chronicle's coverage, culture, and commentary from the past three decades. You can find it all on our website: austinchronicle.com/year30.

In honor of our musical heritage – as well as some key staff members' birthdays – we will be closing The Austin Chronicle offices at 4pm on Friday, Oct. 8. We will reopen for normal hours on Monday, Oct. 11. 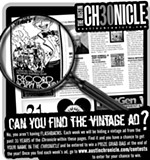 Page Three: Counting Backward
Life is what happens to you

Letters at 3AM: Where We Actually Live: Part II
The country the tea partiers want back no longer exists