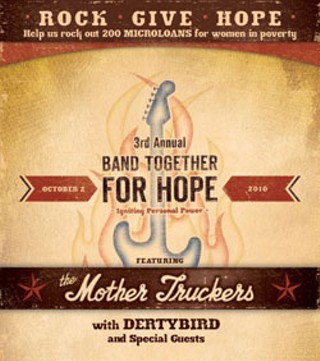 If you're like most people in Austin, you probably walk around with some extra pocket change. It might be just a few coins that jingle in your jorts and tip off the Hooters waitress you've been stalking, or it could be something bigger – maybe some fives and tens that you keep in your wallet for stoned, late-night food-trailer binges – or perhaps you like to roll like a playa and keep a couple of hundies wrapped around a spool of lesser bills, the kind of pocket chum that gold diggers instinctively swarm. Regardless, any way you fold it, you have more than you need. If you weren't compelled by your love of humanity to deny the tin-can-rattling con artists at traffic lights, the cardboard-sign-carrying fauxmless dudes who work the interstate intersections, and the Drag-worms with their cute, hungry-looking stray dogs in dirty red bandanas, you might go broke – well, except for your Platinum MasterCard. To be fair, you're probably not one of those people who thinks charity is just a really unimaginative stripper name. You may not be Bill Gates or Eunice Kennedy Shriver, but you've hit your share of theatre-group fundraisers, celebrity silent auctions, and high school cheerleader bikini car washes. Really, what more can you do? You can't save everybody because … as the saying goes … not everybody wants to be saved. In fact, if you were to lean in close enough to that Somali orphan on the TV who appears to be dying of starvation, he just might whisper, "It's all good," in your ear. Then again, he might not – and how can you be sure you heard him correctly over the buzz of the fly swarm? That's what really freezes you into inaction. How can you know for sure? Where do you draw the line? You pony up for a couple of bags of famine rice, and next thing you know, you're dodging Uzi fire on an aid flotilla headed for Gaza. Truth is, there is a mind-boggling number of worthwhile charities in the world to which you can devote your leisure time and money. How do you decide? Which is most important? Is it better to feed a starving child, keep a kitten from being euthanized, or teach an adult how to read? Who reads anymore anyway? Other than Twitter? Reading just leads to a guilty conscience. Why spend money on something that makes people feel guilty? Don't we have churches for that? Besides, where would Jesus or Muhammad or Stevie Ray Vaughan want you to bestow your largesse? Save the Children or Ducks Unlimited? Everybody loves ducks – even the people who shoot them. You can't say that about children. Probably the best thing to do is lean in a little closer to the starving Somali orphan. Maybe he really is saying, "It's all good," but maybe what he means is, "Anything you can do will be appreciated." You'll need to brush up on your Somali to know for sure. Even still, any time you can step out of your own little drama and help improve the world for others, you're doing good. No need to get stuck up about it. There's plenty of selfishness in altruism, but it's a selfishness that requires wisdom and patience. Yuck. Of course, if you practice doing good regularly, chances are it won't seem so strange and churchy. You might even learn to have fun with it. Here's some good news: You can start practicing Saturday, Oct. 2, at the United States Art Authority when the Mother Truckers and Dertybird perform in the third annual Band Together for Hope, a fundraiser for the DiscoverHope Fund, which provides an opportunity for women in poverty to create their own prosperity through microcredit, entrepreneurship, and training. Sound good? It is.