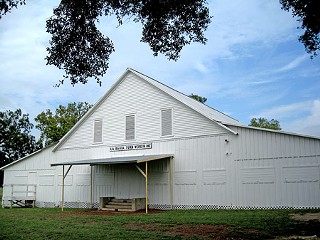 Historic dance halls in Texas were not invented by the German and Czech immigrants; they were just perfected in the farming communities of Central Texas. Among the rich legacies of these early Texans were sausage, Shiner beer, and barnlike dance halls.

When the German settlers began arriving in Texas during the 1840s, they brought the concept of societies, or vereins, dedicated to singing, shooting, and/or gymnastics. These organizations were a tradition that reached back to the 1500s. In a new and strange land, it was only natural for ethnic communities to band together for protection, assistance, and fellowship.

"If the hall had a roof and served beer," says author and historian Lonn Taylor, "then it had to have music." No matter the original purpose of the communal buildings, Saturday night featured a dance band. "The High Hill turnverein couldn't afford a weekly band, so they bought a self-playing organ," Taylor said at the Library and Museum Collections Forum on Texas dance halls held at the Round Top Festival Institute.

At the peak of the verein movement in Texas, there were more than 200 lodges from Galveston to Fredericksburg. Many of them survive more than 100 years later. Saengerrunde Hall, next to Scholz Garten in Austin, was one of the most famous singing societies. The Round Top Schuetzen Verein, or rifle club, still sponsors dances and a Fourth of July parade.

The round turnverein halls in Cat Spring, Bellville, and Peters in Austin County were perfect for gymnastics and dancing, said Steph McDougal, a historic preservationist. The 12- and eight-sided halls were the design of a local carpenter. Residents at Cat Spring organized an agricultural society. Translating documents was one of the society's services, along with Saturday night dances.

As Gary Hartman, professor of history at Texas State University, pointed out, the vereins weren't the only societies that had dance halls. There was also the Sons of Hermann, an insurance and mutual aid society. The Czechs built dance halls for their Slavonic Benevolent Order of the State of Texas (SPJST) lodges, an insurance and social organization. The Catholics countered with Catholic Union of Texas (KJT) halls, and Tejanos and African-Americans had their dance halls. "Each one is a microcosm of the community," Hartman said. "The dance halls were about fun, socialization, tradition, family, and community. There is so much more going on than just dancing."

On its website, www.texasdancehall.org, Texas Dance Hall Preservation Inc. lists more than 500 current and former dance halls, each a unique piece of Texas history. The nonprofit organization promotes the preservation and continued use of the historic dance halls. "The best thing you can do to support these old halls is to go out to one of their dances," says Steve Dean, co-founder of the preservation group. "After all, there is nothing more Texan than a Texas dance hall."