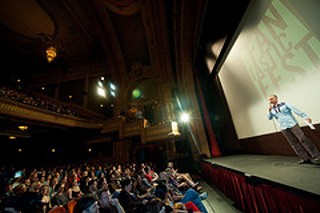 How could you go wrong with something named Fantastic Fest? Well, OK, if you really loved The English Patient or Lost in Translation, you might not appreciate the jackhammer nuance of Fantastic Fest fare. If The Remains of the Day is your idea of two hours well-spent, then it's unlikely your taste is going to dovetail with the festival that brought you The Human Centipede – a movie that, if nothing else, shockingly proves the saying, "If you can conceive it, you can achieve it." It also makes a fairly strong case for 1) remembering to renew your OnStar subscription and 2) the decline of Western civilization. (It's probably used as an al Qaeda recruitment film too.) As disturbing as The Human Centipede is (the disturbing part not being so much the movie itself but the fact that it actually got funded, filmed, and distributed), it's not a particularly inventive film. It is, however, an incredibly ballsy one – and perhaps a sobering look at what's coming down the pike in the horror genre. Expect to see titles like The Human Toilet, Donkey Show Snuff Gallery, and Babies in a Blender, all filmed in 3-D with spectacular computer-generated graphics. Think Grand Theft Auto quality with lots of chain saws, wood chippers, and other dangerous power implements ripping through human flesh in an impressive cascade of urine, feces, and blood. Who wouldn't want to see that? If you let your imagination run wild, it may just run wild enough to make it into your local cineplex. If you're really lucky, your imagination might even end up being a video game … or vice versa. Think that's crazy? Well crazy has already happened plenty of times: Mortal Kombat, Resident Evil, Tomb Raider, BloodRayne, Street Fighter, Wing Commander, Super Mario Bros. The list goes on and on, and, interestingly, no film based on a video game has ever scored higher than 43% on Rotten Tomatoes' Tomatometer. Critics can be so critical. In comparison, The English Patient rocks an 83%, and The Remains of the Day nearly pegs it at 97%. Somehow James Ivory managed to pull that off without stitching Emma Thompson's lips to Anthony Hopkins' keister … well, maybe in a metaphorical sense. The Remains of the Day is its own kind of genre film – that being tedious British films about repressed Victorian values – but fortunately Fantastic Fest doesn't dabble in that kind of fare. If there is a staid English butler in a Fantastic Fest film, he probably has a full crawl space and is a secret sorcerer, a robot from the future, or a badass martial artist who can plunge his hand into your chest cavity and pull out your still-beating heart. Sounds cool, doesn't it? It gets even cooler than that – albeit in a slightly nerdy way. Fantastic Fest has more than 170 official screenings, parties, and events: everything from film debates finished off by actual boxing matches to live karaoke, dance parties, video-game competitions, and even an off-site, cow-on-a-spit barbecue complete with knife-throwing and bullwhip demonstrations. This year, during the first four days, Fantastic Fest has transformed the HighBall ballroom into a makeshift arcade that features 29 different games by cutting-edge game developers. Everyone knows that video games are like flypaper for nerds, so if you're on the prowl for some nerd loving, you'll definitely want to work that room.