Letters at 3AM: Beginnings

How I learned that writing for publication wasn't just about me 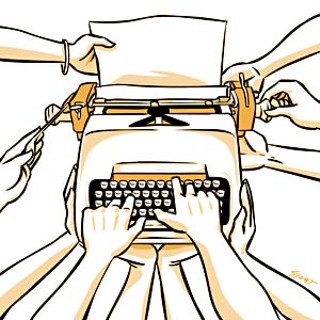 "I think the piece is shit. Get down here."

That was Jeffrey Nightbyrd on the phone. My Greyhound bus journey to and from New York City was to be an Austin Sun cover story. Dan Hubig created terrific illustrations. I'd worked a week on the piece. Hearing Jeff's "Hey" on the phone, I expected praise.

"I think the piece is shit. Get down here."

It was about 10 at night. My story had to be laid out and the paper delivered to the printer in the morning.

Nightbyrd could say something like "I think the piece is shit" clinically, with no whiff of personal conflict. There was a job to be done; it had not been done; it had to get done. It was a problem, a task – not a situation.

The Sun's office was on the second floor of a house on 15th Street west of Guadalupe. There were too many people with too much to do in too small a space, and the mess was constant and ever worsening. If memory serves, there was no air conditioner – in the thick humidity of an Austin summer. (This was our Fourth of July issue, 1975.)

Jeff and I sat down with my typescript on a desk or on the floor or wherever there was space, and, indeed, the piece was shit: abstract rambling about the spirit of America.

The carrying case of my beloved Olympia portable was full of specific notes about all I'd seen and heard. I'd left my notes behind for what I thought were wonderful insights and rhapsodies, except that they were grounded in precisely nothing. What was needed was a couple thousand words of clear prose about real stuff.

By now it was past 11. My story had to be written, edited, typeset, proofed, corrected, and laid out by dawn.

We got it done. Learned a lot that night about my trade. Learned that writing for publication wasn't just about me. If the piece didn't come in "clean" (not requiring a rewrite), a crew of people whom readers are not aware of had to cancel dates, imbibe much coffee (or whatever), stay up all night, and, in general, have a hellish time, because I didn't do my job.

At least I didn't have to learn that twice. It has not happened since.

Learned also that in this gig you don't write for yourself. That's for novels and poems. You write to communicate something worth communicating to someone worth talking to. A piece about seeing America on a Greyhound requires detail. The reader must see and hear and feel the journey. An able writer works his ideas into that seeing, hearing, and feeling.

My problem was approach. A piece of writing can go drastically astray anywhere along the way, but especially dangerous are the beginning and the end. I'd begun that piece deep inside my head and never got out of it.

With the South Austin Popular Culture Center (www.samopc.org) hanging an Austin Sun exhibit until Oct. 23, many memories ricochet within me, but what I remember most aren't incidents or personalities. My most vivid memories are of writing.

Theatre reviews, movie reviews, "think" pieces (as they were called) – the problem always was how to begin. Every time was a first time. I didn't want to sound like anyone else and didn't want to begin like anyone else, but I had to do that so anyone else might be interested. My first three paragraphs usually took me days. No kidding. Two or three or four eight- or 10- or 12-hour days, writing, rewriting, and re-rewriting those first three paragraphs while cursing, ranting, crumpling many sheets of paper, giving up, refusing to give up, thinking I had it, seeing I didn't, trying again.

Once I had those three paragraphs, the rest came in a few hours.

I did not understand and could not admit that I was terrified. Not of failure. Of exposure. Determined that my writing be as genuine as possible, and just as afraid of exposing my innards, my commitment and my fear crashed into each other every time and made me a one-man demolition derby.

The intelligent, beautiful, generous woman with whom I lived – she who paid most of the bills, including those of the dentist who fixed my bad teeth – took more shit from me than anyone merits from anyone. I probably never said thank you. I wasn't the "thank you" type in those days. My moods, my games, my temper, my utter stupidity about what a "relationship" was or required – well, there's nothing more tiresome, more clichéd, and more of a pain in the ass than a young writer acting out his or her pride and fear, needy as a 5-year-old and resenting even the meeting of those needs. (I stayed young that way for a shamefully long time.)

Years later, when, as jazz musicians say, I'd "made my bones," I was asked about my sense of form, and there it was, on the tip of my tongue, as though it hadn't taken years to develop and as though others hadn't paid heavy prices for my excesses: "Begin in the middle. Have the following paragraphs work out from that hub like spokes on a wheel. Finish at what could be a beginning, so the piece ends with energy."

At other times, I answered: "It's like baseball. You're not gonna hit it out of the park every time. But you gotta get on base. Some pieces are stand-up doubles, sometimes you're sliding headlong into first, but you put the ball in play and you get on."

Or another baseball metaphor: "Raymond Chandler said when you're a pitcher and you can't throw the high hard one, you throw your heart. You throw something. You don't walk off the mound and weep. He didn't say that there are days when a pitcher has all his stuff and days when he doesn't, but a good pitcher knows what he's going in with. You don't write about a big subject when you don't have your best stuff. How do you know? Your failures teach you. And sometimes – like when Dock Ellis pitched that no-hitter for the Pittsburgh Pirates blasted on LSD – you're way out there and you don't even know who you are, but the words come and you follow 'em."

Or the jazz metaphor: "You play sax or piano. You've got a gig in a cellar joint somewhere. You know your way around your axe" – "axe" is jazz slang for "instrument" – "and you know the tune and chords, and you feel into it and just play. A good jazz musician can play anything he hears in his head. But that takes lots of practice and many bad nights."

Since the Sun, I've written maybe a thousand pieces. (When I see it that way, I think, "Does this guy ever shut up?") Every one of those pieces depended on an editor, proofreaders, fact-checkers, business people, salespeople, layout people, graphic artists, accountants, and receptionists. (Yes, receptionists. Much of the Sun's chaos, early on, was because it was no one's job to answer the phone. Lord knows how many ads we lost because we didn't realize that a receptionist is important.)

OK, here's a Sun story never before told or even whispered:

Sometimes we'd begin a piece on, say, page 16, and "jump," or continue, it back on page 8 because there'd been no overall plan. And often our typos in print were atrocious. I composed a letter to the editor detailing several egregious mistakes. My friend wrote it out in her precise cursive, on good stationery, and signed it with a name like "Elizabeth May Whetfield." Nightbyrd read us the letter at an editorial meeting and was most stern about how we had to get our act together. I never let on. Just asked if we'd print the letter. A chorus of: "No!" It was too much on the mark. Someone I'll not name said: "Elizabeth May Whetfield – I've heard of her. She's a somebody in this town." Two or three others murmured how, yeah, they, too, had heard of Elizabeth May. She was a somebody in this town.

One, Two, Tres, Cuatro: The Sum Is Greater Than the Whole of Its Parts
Thirty-five years later, only who's doing the clutching has changed

Letters at 3AM: The 'Austin Sun' Gets Hung
Old Austin Sun writers may have expected to hang, but not in a museum