Letters at 3AM: The 'Austin Sun' Gets Hung

Old Austin Sun writers may have expected to hang, but not in a museum 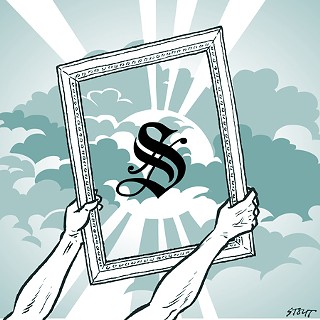 Nostalgia cheapens, corrupts, and, finally, destroys memory, leaving in its place a bright plastic artifact that pretends to be one's past. Not that the past is so easily defeated. What actually happened "back in the day" reaches into the present, often secretly, like a half-remembered dream that exerts its subtle power upon the only day you know you have, the day that matters most, which is today.

And then there are those times when today and yesterday converge.

We who created that garage-band of a weekly paper called the Austin Sun are about to hang in the South Austin Popular Culture Center (www.samopc.org). Our exhibit begins with a hopefully gala opening on Saturday, Sept. 11. It – rather, we – shall hang there, at your mercy, until Oct. 23.

This old Sun writer is here to say that it may be I expected to hang, but not in a museum.

The Sun's heyday spanned October 1974 to sometime in 1978. We did some pretty fantastic work and some pretty silly work, because we were fantastic and silly. As erratic as we were brilliant, as stupid as we were savvy, as brave as we were timid, as blind as we were perceptive, almost every one of us was more concerned with what might happen in the night – at the Split Rail or Antone's or the Soap Creek Saloon – than in the gritty chores necessary to putting out a newspaper. That said, we worked hard at all hours with a kind of innocent fury, and, for better and worse, our major preoccupations – music, sex, coolness, inebriants, movies, and justice (more or less in that order) – filled our pages, illustrated by the finest graphic artists of the era. Whatever we expected at our best or our silliest, we never expected commemoration (probably because we never expected to get old).

A Sun museum exhibit? I find that undeniably satisfying and fucking surreal. What is our crew of misfits doing in a museum? If we were as rebellious as we fancied, would any museum have us? Is it that now that we're history we're deemed safe? If that's the case, it's funny because – trust me on this – nothing about the Austin Sun was safe.

Little about the Sun was even rational.

Back up. Rewind. Look at me on my first Sun day.

The Michael Ventura who climbed the narrow stairs to the paper's messy office on the second story of a house on 15th Street was one week shy of 29. My front teeth were rotten, chipped a bit, brownish. I weighed maybe 122 pounds. Had less than $5 to my name. I'd been sleeping on the couch of a friend of a friend, living on coffee and books – most recently, James Jones' From Here to Eternity and Erich Maria Remarque's Arch of Triumph. As far as social skills, I was a really good dancer. Scared shit of women, but a really good dancer. And I had scant formal education past high school and no experience of any kind at public writing.

Sun editor and instigator Jeff Nightbyrd asked, "Can you write?"

My answer (it was just pure gumption): "Yeah. I can write."

I handed him a crumpled typescript – a 100-page essay I'd written as a way to talk to myself a couple of years before. He read four sentences.

"You can write. What do you know?"

I lied about the extent of my experience in the theatre.

Just that suddenly, I became the Austin Sun's theatre critic.

This was business as usual at the Sun. There's no exaggerating how, as in a fairy tale, people stepped through the Sun's portal and their lives changed for keeps.

Nightbyrd said to James "BigBoy" Medlin, who was driving a beer delivery truck, "You should write a column." Big said, "Why not?" – his favorite line from his favorite movie, The Wild Bunch. They called the column "Why Not?," and a career was begun.

Bill Bentley was a Sun typesetter and played drums with the Bizarros. Nightbyrd psyched out that Bentley could write. He knew before Bentley did. (Bentley recently wrote the Chronicle's cover story on Jimmie Vaughan.)

J. David Moriaty (without whom the Sun's short life would have been shorter) was managing editor. Above his desk hung a sign of warning: "Never Try to Teach a Pig to Sing. It Wastes Your Time and Annoys the Pig." Experience wasn't required; talent was. Carlene Brady, Margaret Moser, Marty McKenzie ("Word Captain," we called her), Dan Hubig, Rhett Beard, Ed Guinn, Sara Clark, Alan Pogue, Ave Bonar, Ramsey Wiggins, Ginger Varney, Eric Rosenblum, Micael Priest, and the rest – most of us doing what we'd never done and now hanging in a museum as we speak.

Why should that be important to anyone but us?

Because of what Randolph Bourne said. A hunchbacked, piano-playing dwarf, and a superb essayist during the madness of the First World War, Bourne wrote:

"Now while everything that is respectable in America seems to be putting its effort, with a sort of joyful perversity, into the technique of destruction, are there are no desperate spiritual outlaws with a lust to create?"

Bourne's words sound contemporary today and sounded contemporary in 1974 when the Sun was rising. Sinister Richard Nixon was our president, and America was still fighting the Vietnam War. (Several Sun people were veterans of that war.) The Sixties had crumbled into the Seventies. Great and ambitious dreams of what America might be were crumbling, too. The Sun, as an entity, said "No" to the crumbling and "Yes, we have a lust to create."

Not that any of us would have put it that way, but that's what we were up to in our contentious, pretentious, slapstick, and sometimes brilliant way. "Desperate spiritual outlaws" is too romantic a label, yet it sort of fits.

Meager pay. No health insurance. No back-up. No business plan that I knew of. No plans at all. But we did care very much about creating something exciting, critical, encouraging, beautiful, kind of sexy, and kind of fun. Something that stood for the wild side of the American dream.

So it may be worth one's while to go to a museum, of all places, and see what the Sun looked like – because desperate, spiritual outlawing still goes on in Austin and elsewhere. It may cheer one up to see that such efforts somehow stick in this cantankerous commotion we call, for want of a better notion, "American culture." That's not nostalgia. That's sustenance.

Funny thing is, if it's true that the Austin Sun is a "legend" (not my word, but others bandy it), it's because we didn't last long enough to become an institution. The Sun went down before anyone could get used to us. Maybe our most direct impact was to help inspire the founders of the Chronicle – as well as be a cautionary tale in how not to run a successful weekly. (There's a lot to be said for survival. And for continuity.)

If the Austin Sun were a tarot card, it would be the Fool – that gaily bedecked, somewhat androgynous youth who, rather dreamily, is about to step off a cliff. He/she believes the laws of gravity do not apply in his/her particular case. And, indeed, for us, they did not. With varying degrees of integrity, the Sun's crew stepped off that cliff – dreamy, yes, but also pugnacious, catty, and ambitious. Many of us pretty much continued in what, at its best, was the Sun's spirit. We also, at the same time, fell to the rocks below and broke many a bone. But everybody does that. Not everybody, broken bones and all, makes what Sara Clark used to call a "contribution."

You don't have to be successful to make a significant contribution.

That example may be reason enough to hang us in a museum – or put us in a zoo, whichever is your preference. One, Two, Tres, Cuatro: The Sum Is Greater Than the Whole of Its Parts
Thirty-five years later, only who's doing the clutching has changed Letters at 3AM: Beginnings
How I learned that writing for publication wasn't just about me