Tweet
print
write a letter
Earlier today: Here we are starting our 30th year of publishing the Chronicle and putting out our 21st "Best of Austin" issue. Casting about for something to write for this space, I thought of a saying that I've often quoted, but I didn't really know where it came from, so I looked it up, starting this string of coincidence.

Twenty-nine years ago, we put out our first issue, and though we had a lot of enthusiasm and some talent, we honestly didn't have much of an idea what we were doing or what we were getting into. Now I've spent half my life doing this – who'd have thought? – and looking back at that time, the saying I always come back to is: "Life is what happens to you while you're busy making other plans." But where does that saying come from?

Nine months earlier, on New Year's Eve 1980, I found myself in a dank cave, a literally underground music club in Bath, England. I didn't know anyone there – don't recall how I wound up there – but it was one of the most memorable New Year's Eves of my life.

Three weeks earlier, on Dec. 8, 1980, John Lennon had been shot and killed in New York City, and the club was hosting a memorial party/wake for him (culminating, predictably, with "Imagine" at midnight).

Three weeks before his death, on Nov. 17, 1980, Lennon's last musical releases had come out: the album Double Fantasy and the single "Beautiful Boy (Darling Boy)." And though I don't recall hearing the song that night in Bath, it has that line in it that's stuck with me over the years. Lennon addressed the song to his then-5-year-old son, Sean, and in retrospect, it's even more poignant than it seemed at the time:

Out on the ocean sailing away

I can hardly wait

To see you come of age

But I guess we'll both just have to be patient

'Cause it's a long way to go

A hard row to hoe

Yes it's a long way to go

But in the meantime

Before you cross the street

While you're busy making other plans

Which brings us back to the future, I guess, so, welcome to the 2010 "Best of Austin" issue/anniversary issue.

The "BOA" pretty much speaks for itself: a little recognition for 300 or so of the things that make Austin what it is: half of them voted on by you, the readers, the other half wild-card entries by our writers and editors. And my apologies in advance if you don't like the choices; personally, I like to think of it as "Some of the Best of Austin."

As for the anniversary, it's the 29th – we first published Sept. 4, 1981 – so it also marks the start of our 30th year. We're working on a few different 30th anniversary projects to take place throughout the year: republishing the first year's issues online every two weeks (that's how often we published for the first seven years), running vintage ads from some of our original advertisers in the paper (it's a contest; see details in the ad pictured); and the editors promise a series of "lists of 30 things" features that I'm not quite clear on but I'm sure will be fun. It's all evolving at austinchronicle.com/year30.

Lastly: We haven't forgotten the 2010 Austin Gay & Lesbian International Film Festival this Tuesday-Sunday, Sept. 7-12 – far from it. See "aGLIFF 23 Preview," for our picks and more. 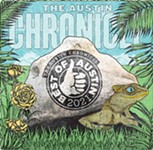 We Have an Issue: Finding Inspiration in the “Best of Austin”
Check out the nearly 900 (!!) people and places nominated in our "Best of Austin" Readers Poll

Page Three: Still Free After All These Years, But …
Ways to support your favorite alternative weekly