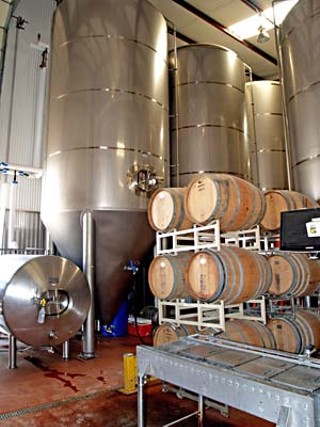 The Real Ale brewery tour in Blanco is a beer lover's dream come true. For folks who understand words like "wort," "mash," and "specific gravity," this is total immersion in the art of craft brewing. Those not as well-versed in the finer points of the chemistry of beer-making will still find the tours an interesting look behind the scenes of the brewing process.

The company began 14 years ago in the basement of an antique shop on the town square in Blanco. A little more than four years ago, the brewery moved to a new building off the highway on the northern edge of town. The beers have become so popular with Central Texans that the brew house keeps expanding to keep up with demand for its Firemans 4 Blonde Ale, Rio Blanco Pale Ale, and Brewhouse Brown Ale.

Leading our tour among the stainless steel tanks was Erik Ogershok, the brewmaster and head beer taster. Wearing calf-high rubber boots, carrying a tall glass of fresh brew, and wielding a dry sense of humor, Ogershok took the visitors through the beer-making process, from the two-row hops to the bottling line in a quick 45-minute tour.

The first thing you notice about the brew house is the smell of grain, much like a feed store. It's not surprising, since beer is made by fermenting grains. An interesting side note is that the spent grains are given to a dairy farmer to use as feed for his cattle.

"Brewing is basically a shell game of moving the beer from tank to tank," Ogershok said as he led our group through the narrow canyons of tanks named for employees. Once the ingredients are mixed together, Ogershok uses gravity, time, and temperature to control the final output. Most beers take 17-21 days to make, some as long as eight weeks. It all depends on the style of beer.

What sets the craft brewers apart from the national brewers is their ability to experiment and try new styles. Ogershok started as a home brewer but realized that he wanted to do much more with brewing than his kitchen sink would allow.

In the back of the brew house, he has aluminum casks where he tries different recipes, which vary from fruit beers to exotic hops. The brewery also uses oak wine barrels to age small batches for limited release.

The Real Ale brewery is on San Saba Court off Highway 281 in Blanco. The tasting room is open on Fridays from 2 to 5pm with tours at 3 and 4pm. Visitors don't have to take the tour to try the five beers on tap in the tasting room. At least two of the beers are usually part of limited-release batches. For directions to the brewery, call 830/833-2534. Sign up for notifications of the special releases at www.realalebrewing.com.