Letters at 3AM: For All Reasons 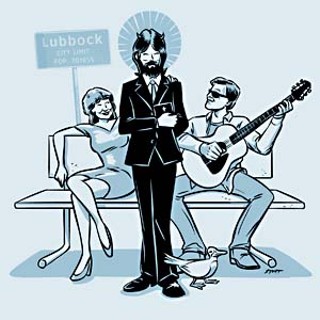 There used to be a sign that marked the West Texas border line on U.S. 84. You would have just passed through Clovis, N.M., where Lubbock-born Buddy Holly recorded. An hour before that, you'd have seen what little there is of Fort Sumner, where Billy the Kid has not one but two graves. A while before that, maybe you ate at the Sun 'n Sand Motel and Restaurant in Santa Rosa – terrific enchiladas. Maybe you stayed there overnight. The last time I did, there were two severe dents in my room's bathroom door, each the size of a fist. I noticed a strange darkness on the lower mattress, pushed the upper mattress over, and discovered a blood stain, very dark, an irregular blob about a yard across and a yard up and down. It looked like too much blood to lose and live. Somebody was maybe killed on that mattress. My companion doesn't get easily shook up, so she and I just pulled the top mattress back in place and slept the sleep of the fortunate. Anyway, that sign just over the Texas state line stated simply and mysteriously:

VISIT LUBBOCK – FOR ALL REASONS.

Typical Lubbock-style wit. You hear it from farmers, cooks, cowboys, and especially from the town's artists – musicmakers such as Terry and Jo Harvey Allen, Butch Hancock, Jo Carol Pierce, Joe Ely, Jimmie Dale Gilmore, Spider Johnson, John Reed, Tommy X. and Charlene Hancock and their gifted family; or Lubbock's visual conjurer-artists (as I call them), such as Deborah Milosevich and Steve Teeters; or writers such as Ginger Varney and (from down the road in Odessa) James "BigBoy" Medlin. That sign makes perfect sense to what you might call the Lubbock mind because it's a little screwy, ambiguous, even sort of scary. A town that dares invite all reasons – who knows what will show up? "All" covers a lot of ground.

A lot of ground is what's most plentiful on these Great High Plains. Lubbock has no obvious reason for being where it is, on land no different from the thousands of square miles all around it. A century and more ago, it was an act of no small audacity to look from flat, treeless horizon to flat, treeless horizon, far from any river, and say: "Well, now. Let's stay here."

To Lubbock's artists, "for all reasons" is an inner land that scares the hell out of most people but is the conceptually wild natural habitat to those for whom neither comedy nor tragedy, metaphysics nor irony, politics nor religion, suffice to describe or explain the dirt, glory, and flat-out strangeness of our human experience, in which all reasons are present but none are final.

Lubbock's pioneers built churches as soon as lumber was hauled in by wagon, to fasten the god of the wind down to the ground where he might be of some help. Lubbock boasts more churches per capita than any city in the world. But churches suffer a paradox described by Medlin: "The builders of every church create a roof between man and the heavens. Is it possible to use an assemblage of souls to lure God into a structure and trap It there for our own amusement?"

That question expresses the great divide, tangible but not visible, that cuts through Lubbock and the entire Bible Belt (of which Lubbock is the buckle): the divide between the many who stay under that church roof and those who don't. When the question is raised as to how a multitude of extraordinary artists came out of one small city, the answer has something to do with how hard they had to fight for their uniqueness in an environment permeated with fundamentalism yet wild as its weather – an environment these artists have loved and resisted with equal fierceness.

That particular struggle creates what Jazmin Aminian Jordàn calls the "Machu Picchu funkiness" that marks their art – a kind of mysticism that shows up even in the most resolutely existential, as in a song co-authored by Jimmie Dale Gilmore and Butch Hancock called "Yesterday Was Judgment Day": "Did you lay down in heaven? Did you wake up in hell?/I'll bet you never guessed that it would be so hard to tell." The chorus poses a question that contains a kind of answer: "Did you hear the riddle/of a road without a middle/or an end?"

"Softly, softly walk between your dynamite and the thing it knows." Ginger Varney told me that. (I stole it, put it in a novel.) That's what my Lubbockians had to do. Raised in the most conservative of conservative towns, they had to discover their dynamite, fight for it, and not get blown up by it – or by the town and its Bible Belt double bind, which I first heard expressed by Terry Allen: "Jesus loves you, and he'll send you straight to hell. Sex is filthy, wrong, disgusting, and you save it for the one you love."

They kicked against the pricks (as St. Paul famously put it) and came up with extraordinary outcomes.

Jo Carol Pierce, in her classic Bad Girls Upset by the Truth, addresses the Virgin Mary frankly: "Does God have us by the twat or what?" Jesus leads her in so many contradictory directions that she exclaims: "Only a deity could be this mean." In her vision, the Virgin Mary and Mary Magdalene merge and manifest in a Lubbock supermarket wearing gorgeous shoes and causing Jesus to be reborn as the prettiest infant girl. One way of saying: Time to start over.

All through Terry Allen's music and art he asks: "Whatever happened to Jesus?/Where did that good old boy go?/Did you leave him behind back in Texas/or did he just hide/in the devil's disguise/somewhere in your soul?" Driving a Panhandle highway at night he sees Jesus, halo and all, hitching a ride. Naturally he stops, kicking the beer cans under the seat, but Jesus assures him he's got "nothin' to fear about drinkin' a beer/if you share it with the son of God." As for heaven, this Jesus teaches "it ain't somewhere up in the air/It's sittin' right here inside with you.

"Then from the middle of that perfect smile/from his robes he pulled a gun/an' stuck it up beside my head and said/'How's this for Kingdom Come?'/... I heard him say/as he left me beneath the stars/'The Lord moves in mysterious ways/And tonight, my son, he's gonna use your car.'"

Again and again, they seem to say: We can't help but love Jesus, but we'd best not trust him. Got to fend for ourselves in the end.

"Salivation" is a furious Terry Allen song ("Hold on to the Good Book/but don't hold your breath"). Suddenly the song calms down, and a duck talks to the sky. In Donald Duck-ish lisps, it addresses "angels of the mystery," telling us: "Heaven is just an adjustment/that moves on down the road."

Several possibilities. Terry Allen hides behind a duck's voice to say what he really believes. Or: We don't live our religion, but ducks live theirs so ducks get the last word on how, after death, the road still leads somewhere. Or: In a duck's voice, Terry Allen says stuff many of us believe because he thinks such stuff could be believed only by ducks.

Does that make me, metaphysically, a duck? OK. I'm a duck.

Ducks aren't geese, but Terry Allen's duck brings to mind how it's not only Lubbock's artists who exhibit Machu Picchu funkiness. One New Year's Eve just before midnight, in the playa lake across the street from my Lubbock apartment, about 2,000 geese started a terrific racket of squawks, louder than I'd ever heard from these particular geese. They then did something very Lubbockian. They all took to the air, just at midnight – I promise this really happened – and they circled several times, spiraling higher and higher, squawking ever louder, creating an image that was mythic in its grandeur. Then those geese disappeared into the darkness, not to return. New Year's Day was bright and cold and geeseless, for all reasons.

The University of Texas Press recently published Terry Allen, which includes texts by Dave Hickey and essays by Marcia Tucker and Michael Ventura. Echoes of Ventura's essay appear in this column. 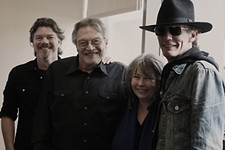