Letters at 3AM: A Fallen Catholic in a Fallen Church

I can't hide from my sins and, now, neither can the church 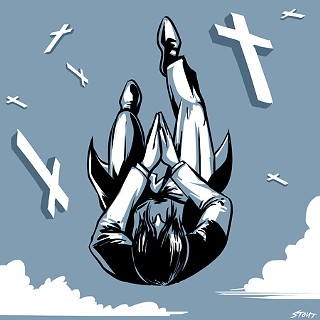 During the election of 2008, I sought to pray for my country. Not to pray for a specific outcome, but for the well-being of my country. To do this in my apartment seemed somehow inadequate. I wanted to pray among others who share our country's fate. So, for the first time since boyhood, I attended church somewhat regularly – Saint Joseph's, a largely Hispanic congregation in Lubbock. I had not been to a Catholic service since Vatican II and had no desire to hear Mass celebrated in English. Understanding Spanish as little as I understand Latin, I attended Saturday afternoon Spanish services.

I am what they call a "fallen Catholic," but no matter how far a Catholic may fall, to step into a Catholic church is a solemn, utterly familiar feeling. Over the years I'd sometimes entered an empty Catholic church to light a candle for someone or to pray by myself or just to sit. I've taken off my hat, dipped my fingers in the holy water, and made the sign of the cross. Before entering a pew, I've observed custom and knelt toward the altar and again made the sign of the cross (repeating this when I left the pew).

Why? I don't believe the doctrine, I know too much church history to revere the institution, and its Dantean sense of order I find false and stifling. Yet mine were not empty gestures. What was I praying to? What, with these performances or echoes of ritual, was I honoring? Something in my bond with the infinite resides in those gestures of ritual, and I have been content to let that be. Faithful or not, something strong in me still is Catholic. It would be petulant intellectual pride to deny that.

Then, appropriately enough, at an Easter dinner, another somewhat fallen Catholic and I – both of us working-class men – conversed about the church of our childhood. I spoke of my father's death and how, for the first time as an adult, I'd desired to go to confession in order to take Holy Communion at the next day's Mass. I didn't need a reason. It was just something I wanted.

But I felt a shade embarrassed. What would I say in the confessional? "Forgive me, Father, for I have sinned. It has been 40-odd years since my last confession. In all honesty, I am not sorry enough for my sins to deserve absolution." Something like that.

I walked to a church in the evening, only to find it locked. The churches of my childhood were never locked, and there was always a priest present to hear confession. In fact, I'd thought the great difference between Catholics and Protestants was that Protestants locked their churches and Catholics didn't. Well, now Catholics do. Another boyish illusion gone. Since I couldn't take Communion without confession, the impulse passed.

"But you can!" said my surprised conversant. "Since Vatican II, you can."

Here I was confronted by a paradox that floored me, for I heard myself say, with no small indignation: "That's wrong! That just flat out ain't right. I could never do that." Then: "Oh, my God! Obviously, in some part of me, all this intellect doesn't matter. I still believe that Communion without confession is a sin."

I was laughing, but also not. In spite of my private, painful investigations into what the word "God" might mean for me, there still lived that boy Michael who believed. Yes, and that teen Michael who for a time thought of becoming a priest. (I was dissuaded by remembering that priests must swear obedience to church hierarchy. Obedience is not one of my virtues. And there was the rather large stumbling block that, intellectually, even at 16, I could not accept the church, nor would it likely accept me. Father Michael was not to be.)

This was something else I let be. James Hillman taught me that there are rocks in the psyche, fixed points in oneself that had best not be messed with. These rocks – some are boulders, some emeralds and jade. If some of my rocks are remnants of Catholicism, that's how it is. The saints, the Virgin, the mysteries of the sacraments, the statues and stained-glass windows, the incense, Gregorian chant – no getting past them. A few years ago, in New Mexico, I'd even asked a priest for his blessing. Rocks, the beautiful and the unbeautiful. Step around them. Let them be.

Buddha taught that one must make peace with the god or gods of one's childhood. Honoring the Catholic in me was sort of a way of doing that.

So, as I've said, during the election of 2008 I went to Mass. The Spanish language was so like Latin that I understood most of the same words – Dios and the like. And I was comfortable among olive-skinned working people very like the Italians and Sicilians who surrounded me in church as a kid. What struck me deeply was that there were no altar boys. (My brothers had been altar boys.) Instead, to my great surprise: altar girls! Led by a girl in her teens who performed her tasks with splendid dignity and beamed a serene joy. To be honest, I did not think of all the church's sins against women, which are many and mighty. I was moved almost to tears that these girls, and several lay women, were part of what had been a strictly male service in my youth. The priests were fairly young, enthusiastic as well as reverent. Among these men, women, and children, it felt somehow whole to pray for the well-being of our country.

The Hasidic Rabbi Pinhas taught that "prayer unites the principles." One prays not to supplicate but to unite with God and with community. For me, it means to declare oneself a willing participant in something larger and a neighbor to others. As for the worth of prayer, measuring that is as pointless as trying to measure the worth of art (which, they say, started as prayer). For me, the declaration of solidarity is something valuable in itself.

Of course, nowadays, to mention the Catholic Church is to invoke its sexual-abuse scandals that have implicated, by his inaction, even the pope. In the church of my childhood, "abuse" wasn't called that. It wasn't called anything. As a boy, I was intimate with the abuses of priests and nuns. Except for a few beatings with a ruler, it didn't happen to me, but it happened to people I loved. These scandals have shown the world an ugliness that for generations has been cloaked in silence: When threatened with exposure, the Vatican's prime response is to protect itself, not its kids.

The Catholic Church has always been about saving souls, not people. Do not in the least discount the efforts over the centuries of many thousands of sincere priests, nuns, and Catholic lay people, such as Dorothy Day, who, as she said, have worked to "advance to that kind of society where it is easier to be good." But, theologically, Holy Mother Church is about saving one's immortal soul through the administration of the sacraments; that, and the continuance of the church itself, which, if I correctly understand the doctrine, is one with Christ. When you're a believing child, you're taught priests and nuns literally represent and speak for Christ. When a nun beats you, it is Christ beating you. When a priest violates you, it is Christ violating you. What could be more terribly unfathomable to a child? That is why my brother Aldo would write: "Christ dwells in cancer cells."

So, when I now and again attend Saint Joseph's, I am a fallen Catholic in a fallen church. I can't hide from my sins and, now, neither can the church. We revealed our sins in confessionals. Now the church is forced to confess to the world.

Still there is this, for me: As you get older, you kneel beside more and more graves of those you love. When I kneel beside a loved one's grave, I make the sign of the cross. I just do. I can't not. 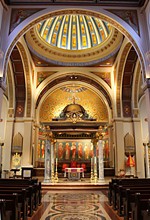 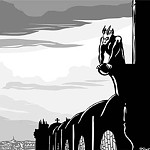 Letters at 3AM
A Monster in Repose