Page Two: Yes We Said Yes We Will Yes

The 'Chronicle' in bloom

Quite clear, no doubt, somehow

Ah, but I was so much older then

I'm younger than that now."

And the day keeps on remindin' me, there's a hellhound on my trail

– Robert Johnson, "Hellhound on My Trail"

"6. Don't look back. Something might be gaining on you."

– Satchel Paige's six rules for "How to Stay Young"

The date of June 21, 2010, is now behind us. Summer has officially begun, though, of course, the weather has felt more than summerlike for weeks now. The World Cup tournament is in full swing. This is the 29th summer that the Chronicle has been published. The first issue was published the first week of September 1981. The paper was biweekly until September 1988. Those first summers, I was terror-stricken and panicked because I constantly worried about the paper – and because I was always that way back then.

After the first two or three years of publication, though I was still stretched as tightly as a thin metal wire that is right on the verge of snapping, almost everyone else who was still involved with the paper had calmed down to varying degrees. By the summer of, say, 1985, when the Chronicle was almost four years old, most of the staff had stopped worrying that the paper could and would die and disappear in the snap of the second it takes lightning to streak across the sky during a storm. They didn't worry that all our work and all the time we had invested would disappear so quickly, with barely a whisper of smoke left behind.

In those times, Austin would dramatically and noticeably slow down during the summer. The university and the Legislature, among the biggest employers in town, were both seasonal in terms of workload and attendance. The biweekly publishing schedule, combined with putting out smaller issues because of the seasonal slowdown, made summers sweeter and easier for most of the staff. It was like a cartoon where the speed of daily life was cranked down almost to slow motion, as, figuratively, it was a time to slowly sip mint juleps – or straight Southern Comfort on the rocks – as one gently rocked on the front porch. More literally, there was still lots of time spent in dirty, dank clubs, listening to loud music and hanging out in grungy, tired apartments where some drank too much and where their and others' intake of other substances was just as substantial.

I was hunched over, worried sick, in the middle of an eight-to-10-year bad mood that encased me, hanging over my head while spreading forth in any direction it could find space to move. Those times, too – both the sweet, lazy days of some and my way too tightly compressed constant demeanor – passed, as everything does sooner or later.

In September 2010, right as this summer ends, the Chronicle begins its 30th year of publication. In many ways, three decades have made for so many changes that the connection with our beginning is as much one of blood and memory as it is of history and purpose. The most obvious shift is that things are no longer as markedly linear, in that there were so many significant deadlines and events, each casting its shadow over all the time preceding it. Ironically, though linear, it was a time of maze and confusion: We were stuck in M.C. Escher's Ascending and Descending, always working furiously and constantly in motion, though never getting very far.

" ... yes and then he asked me would I yes to say yes my mountain flower and first I put my arms around him yes and drew him down to me so he could feel my breasts all perfume yes and his heart was going like mad and yes I said yes I will Yes."

The success of the paper was never a sure thing. We pretty much made every mistake that could be made when starting an enterprise, launching a publication, and beginning a business. But we made very few of them twice. The Chronicle as a publication did most things wrong, according to ever-changing, ever-evolving opinions on modern print media. In fact, frequently we did almost the exact opposite of what should be done, according to accepted wisdom. Some rules we broke were clearly articulated, while others were more assumed than spoken.

"People don't like to read," "Write down to your audience," "Do not have type-heavy pages – go for short articles, lots of empty space, pack it with art," "Attitude and cynicism are hip; sincerity is passe." "Don't have writers who are involved in the areas they cover," and "Mock the home team; don't root for them."

In the beginning, the Chronicle's emphasis on local music, film, theatre, writing, comic art, etc. seemed to some to be quaint beyond precious. It was labeled "parochial" and "misguided." When the trend for weeklies shifted to the point where most of them were giving serious, if not priority, coverage to their local scenes, that talk drifted.

There were a lot of people who thought that the Chronicle would never make it. Actually, in the beginning most people – including at least a few of our staff members – gladly would have bet against us. Over the years, many different folks have shared some variant on that observation with me. A few of them did so during the early days when we were hanging on for dear life, not by our fingertips but our fingernails. Others offered their past thoughts more reflectively after the Chronicle was established.

It even turned out that a number of our earliest advertisers, which we were so thrilled to get when they first signed contracts, were figuring they would never have to pay because there was no way the Chronicle would survive. This was based on their experiences with a number of other publications, which had come and gone quickly. They couldn't imagine the Chronicle would be any different.

The summer in front of us is tightly wound and way too hot. The Chronicle's past sprawls and spews out behind it, for better or worse, covering almost 30 years of Austin, culture, people, politics, and what have you.

The next South by Southwest Music, Interactive, and Film Conferences and Festivals in March 2011 will be the 25th.

Everything is different now; very little is the same. An exception to that is the attitude of "keep on keeping on," which is not just the way we're doing it now but pretty much the way that we've always done it.

Rock & roll is here to stay

It's better to burn out

Than to fade away

"The only answer to the question 'Whither rock & roll?' is 'hither.' Some misguided people think the answer is 'thither.' They're wrong. Those theories are passé.

– Jeff Goldblum's rock critic Max Arloft, lecturing to a group at a women-only university in Joan Micklin Silver's Between the Lines

1977's Between the Lines, which has not been available in any home entertainment format for years, can now be ordered on DVD exclusively from Amazon. Directed by Joan Micklin Silver from a screenplay by former The Boston Phoenix and The Real Paper writer Fred Barron, Between the Lines is about an underground weekly in Boston being sold to a wealthy new publisher. The cast includes John Heard as the already-burned-out writer, Lindsay Crouse as a photographer, Bruno Kirby as a would-be cub reporter, Stephen Collins as the writer who has an eye on much greener fields than the alternative press, and Gwen Welles as his girlfriend. Lane Smith appears in what might be unkindly referred to as the Stephen Mindich role (Mindich was a Boston Phoenix ad salesman who later co-owned the paper). The rest of the cast includes Marilu Henner, Joe Morton, and Jill Eikenberry. Also, there is a brilliant early Jeff Goldblum performance as a rock critic and the ever-constant Michael J. Pollard as a paper hawker. A tip of the hat to Dan Mucha for turning me on to this. 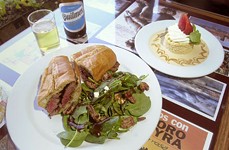