Chickamaw Farm outside of McDade grows blueberries, and this year promises to be one of its best crops ever 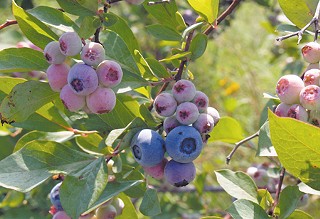 Chickamaw Farm outside of McDade grows blueberries, and this year promises to be one of its best crops ever. If you hurry and get there before the Fourth of July, you will be able to pick a bucketful of the sweet berries.

In the sandy-loam soil of the Lost Pines north of Bastrop (about an hour's drive from Austin), the farm is the westernmost and southernmost of any commercial blueberry patch in Texas. "Blueberries don't grow easily here, but they'll grow," says Bill McCranie, the farm's owner. On Memorial Day, the branches of nearly 200 bushes were straining from the weight of berries.

Bill smiled broadly as he showed visitors the clusters of young berries while his two sons popped ripe orbs into their mouths. After two years of drought and disappointing crops, this year the rains came at the right time. He didn't plant a strawberry crop this year because of his previous losses, and the cows got his blackberries. Such are the up-and-down fortunes of a farmer.

"Farming is not a walk-in deal," Bill says. "You have to build a farm over time." He and his wife, Nancy, began cutting their fields out of the thick woods about 14 years ago. During the week, Bill works in the petroleum industry. At home he shuns the use of chemicals. Their farm is certified organic.

Using a process called biodynamics, Bill has created a natural ecosystem in his fields. He likens it to the way he established the food chain in his two ponds. He started with the smallest fish and gradually built up to stocking catfish that haven't been fed synthetic food. "You could eat nearly anything on the place," he says with a laugh.

The farm's name comes from a Choctaw word for "sacred ground," and that is what Bill and Nancy have created on their patch of earth. Surrounded by a sanctuary for wildlife, they have planted additional blueberry bushes and hope to add to the farm's crops over the next few years. "We want to produce the kind of food for other people that we would eat," Bill says.

Chickamaw Farm is open for pick-your-own blueberries by appointment. Call 512/567-3456 for directions and availability. Mornings are the best time. Smart pickers bring plenty of water and a small ice chest and wear a hat and closed-toe shoes. Also, ask about the availability of grass-fed beef raised at the farm. The business is a member of 1% for the Planet and donates a portion of sales to environmental organizations.

Blueberries need acidic soil like that prevalent in East Texas. Other blueberry farms in the area include King's Orchard, Plantersville; Huebner Farm, Normangee; DeZavala Vineyard, Franklin; and Kingsbury's Blueberries near Caldwell. For a list of pick-your-own farms in Texas, go to www.picktexas.com.