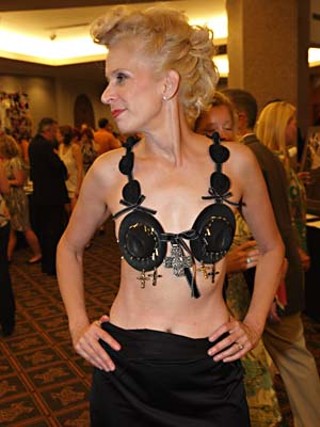 TAH-TAH TRAUMA Last Thursday night was the Texans for Tah-Tahs Bust a Move for Breast Cancer Date Auction at Antone's, a fundraiser for Susan G. Komen for the Cure. It was all in good fun and done for a very worthy cause, but I also desperately wanted it to be more organized and done with more style and flair than it was. It's always a dicey proposition to criticize a charity event. If I say that some event was lame or that some fashion show was boring, the knee-jerk response from the producers of the event or show is to wail, "But it's for charity!" We've been through all this before in this column, and I steadfastly believe that if it's for charity, then the production should be the very best it can be. First off, getting people to part with their money is a very tough proposition these days, especially when every nonprofit seems to be chasing the same dollar. Secondly, if the nonprofit expects folks to keep on giving, what they give back to the crowd is critical. On the other hand, my mother is a 20-year survivor of breast cancer, so I know that every dollar raised is helpful. I don't know why I originally declined to attend the Graphic IV Art Bra Fashion Show produced by the Breast Cancer Resource Centers at the Bob Bullock Texas State History Museum last Saturday night. I knew it would be pretty glamorous but had mismarked my calendar and thought I was already booked. I received many notifications about it from the center's PR firm and the center itself. Finally, Barbara Formichelli, BCRC's gorgeous and glam director of marketing and events development, wrote to me telling me how sad she was that I wouldn't be attending, especially since I'd taken my mother to the BCRC brunch at which Rue McClanahan spoke, and we'd enjoyed the event very much. Okay, I was beginning to feel bad about the whole thing but checked my calendar and couldn't figure out why I'd declined in the first place. I wrote Barbara back, admitting that she'd shamed me into attending. I called my own personal Posh Spice, Jaclyn "Jacki-OH" Havlak, knowing we'd be sitting on the front row – she was the perfect choice due to her unwavering support of breast cancer research. I wasn't so thrilled about how this event started out, either. The speeches were slow (but heartfelt), and it was pretty quiet for some time. The live auction was emceed by Ken Stein from the Paramount, who was very amusing, and News 8's very pregnant Crestina Chavez. The fashion show started: The models were breast cancer survivors themselves. First out was Gail Chovan, my first and favorite fashion icon in Austin, and it was a surprising but exciting start. After Gail was through, the second model came down the runway and did her spin. The third model came out full of sass and attitude in all black. A stage IV survivor, currently in chemotherapy, she headed down the runway, stopped in the middle, and curiously rolled her eyes and head. I've seen plenty of runway performances in my time and wondered what this model was going to do. She began to collapse slowly to the ground, as if she were one of those little figures held together with elastic that collapse when you push on the button on the bottom of the base. Her head rolled toward the edge of the runway, and the crowd was spellbound ... until a crowd of spectators began calling for help and asking for a doctor in the house. Fortunately there were several doctors in the house, because the model had gone into cardiac arrest and CPR was administered immediately while we awaited EMS. Jacki and I were in shock over what we'd just witnessed and went outside to begin trying to process it. The gravity of what we'd seen really hit us, underscoring the importance of this fundraising event. After we'd seen the model taken away from the Bullock, we wandered back inside, asking if the show would continue. We were informed that it had been left up to the other models/survivors who unanimously agreed that they had to go on. I was very pleased to hear it, and when the show restarted, it was with an energy and intensity that I've rarely seen on the runway before. With the exception of one model who, well, acted really slutty (we'll forgive and presume drunk from the stress of the incident), the rest of the show was a dignified and deeply moving event. It was the kind of show that will never be forgotten, one that served its purpose so succinctly that it was impossible to tell art from life – or the other way around.