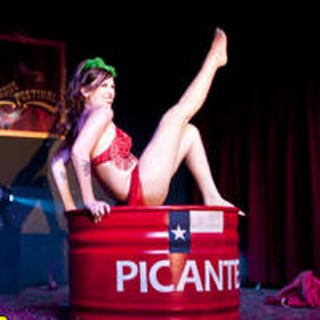 OK, here’s the deal: Burlesque involves stripping … but not that skanky, donkey show, picking-up-pingpong-balls-with-your-vajajay kind of stripping. No, modern burlesque is more about the dress than the undress. Sure, you can show up in your trucker cap and sleeveless camo T-shirt, flicking your tongue between your peace fingers and yelling, “Show us yer ta-tas, baby!” But mostly what you’ll get is the judgmental, raised eyebrows of your fellow audience – the same sort of look you get at a little league soccer game when you scream, “Either you nut up and take that goalie out or you’re hitchhiking home!” to your 6-year-old from the sideline. Unfortunately, the fact that he recoils into a defensive fetal position every time the ball comes near him doesn’t excuse your boorish, anachronistic behavior. Crazy as it sounds, burlesque fans can be a little stuck up too. Why? Because burlesque, much like parenting and society itself, has evolved. It’s now an art form. Stripping, on the other hand, involves the coarseness of overt monetary exchange. Merely by walking in the door of a tittie bar, a strip club, or a Hooters, you are opening yourself up to being called a chauvinist pig. Fair or not, this does have its advantages. For one thing, your standard of acceptable behavior drops to somewhere between that of Rush Limbaugh and a homeless man who just crapped his trousers. Essentially, all bets are off … at least until the bouncer pile drives you into the asphalt in the parking lot for dry-humping your cocktail waitress. For the exorbitantly high price of a rubbery surf and turf combo, you buy the right to unleash all manner of misogynistic, foul-mouthed commentary; obscene gestures; and lascivious leers. If you have the foresight to bring a roll of one-dollar bills, you can actually break the fourth wall and let your fingers brush against the skin beneath the G-string when tipping. Whoa! Cleanup on Aisle 9. Burlesque, on the other hand, while hardly the model for genteel sensibility, nonetheless has a certain level of decorum and, more importantly, an overtly post-feminist mindset. If you just took off your trucker hat to scratch your head, think of it this way: chicks on top. The progressive political orientation of the neo-burlesque movement leans strongly toward female empowerment and celebration of the female form – lofty phrases that have no doubt been appropriated by every low-rent, skeevy porn director on the planet when recruiting for lipstick lesbian scenes. Nonetheless, if a woman says she is celebrating empowerment by performing a bump-and-grind routine to Tom Waits’ “Shiver Me Timbers” in 6-inch heels and a dangerously tight corset, you have to take her for her word – at least until she invites you into the men's room for a quick $5 HJ. The preceding scenario however, is extremely unlikely at modern burlesque gatherings, where adjectives like “artistic,” “inventive,” and “classy” abound. There is still plenty of skin, but fewer black eyes, pimp bruises, and cheap, lopsided Mexican breast implants. More importantly, the stigma of being labeled a creepy, lecherous voyeur is almost nonexistent. As a fan of burlesque, your lechery is repackaged as a healthy appreciation of camp, fashion, and artistry – sort of like going to the Roller Derby, only the chicks are hotter and don’t wear knee pads. Don’t let that slow you down however, because burlesque will certainly add to the richness of your fantasies, even if it doesn’t necessarily fulfill them. This weekend you can fill out the cast of your fantasies by attending the Texas Burlesque Festival, which is being held Thursday-Saturday at the Independent. The Texas Burlesque Fest showcases more than 60 of the best burlesque performers from across the country and is hosting workshops to help performers hone their craft and polish their art. And really, wouldn’t you rather spend that roll of ones empowering women?