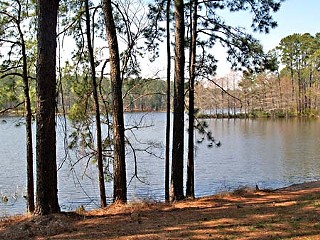 The Davy Crockett National Forest, between Lufkin and Crockett in East Texas, is a cathedral of towering pine trees bordered by flowering dogwoods and stately oaks. In the meadows, wildflowers and a carpet of emerald green grass are bathed in sunlight.

The forests of East Texas are a paradise almost lost. When Anglo settlers first arrived, they found parklike forests of loblolly and yellow pine trees with trunks so big that two men could hardly reach around to grasp the other's hands.

Without modern machinery to harvest that natural resource, the forests were left relatively untouched. That changed following the Civil War, when the railroads brought heavy equipment and armies of lumberjacks. Lumber companies built towns like Kirbyville and Diboll and named them after company executives.

For 50 years, the timber industry in Texas boomed by clear-cutting the virgin pine. Many companies expected that the cleared land would become farmland, but the sandy soil wasn't good for much more than grass or trees. It wasn't until after 1914 that conservationists, some owners, and the state Legislature began reining in irresponsible practices.

During the Great Depression, President Franklin D. Roosevelt sent a new army into East Texas. This time the boys of the Civilian Conservation Corps were planting thousands of pine seedlings instead of harvesting thousands of board-feet of lumber. In 1936, the federal government bought 675,000 acres of clear-cut land and created four national forests in Texas.

A map of the 161,842-acre Davy Crockett National Forest is a patchwork of public and private land. The multiple uses of the forest land include lumbering, grazing, hunting, and recreation.

In addition to conservation projects in the national forest, the CCC built a campground among the towering pines around a 45-acre lake at the Ratcliff Lake Recreation Area that was once the log pond for a sawmill. The National Forest Service will conduct an environmental study for a redesign of this recreation area this month, so it will be closed from April 7 to April 27. From the lake, the 20-mile-long Four C National Recreation Trail winds through the second-growth forest and the Big Slough Wilderness Area to the northernmost point of the park at Neches Bluff Overlook near Texas Highway 21.

Bicycles are not allowed on the hiking trails, but horses are. There are nearly 53 miles of horse-riding trails in the forest. Primitive camping is allowed along the trail, with some tent pads provided. Outside of the campground, there is no potable water. The rangers at the headquarters in Ratcliff readily admit that insects can be particularly annoying during certain times of the year. Deer hunters can also be a slight pest from October through the first week of January.

The park office and the campground are on Texas Highway 7 near the community of Ratcliff. For information on reservations and fees, contact the headquarters at 936/655-2299, or go the National Forest Service's website at www.fs.fed.us/r8/texas.