The screenwriter of Roadie visits his younger, more serious self 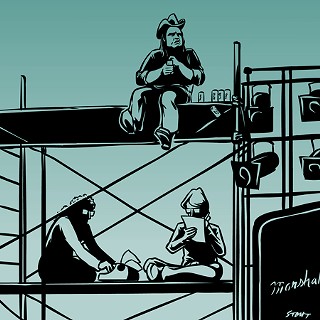 Kaki Hunter's front tooth was a little broken at one corner and its sidekick bent backward funny – a rare sight in a Hollywood of identically perfect dentistry, and it made for a smile the camera loved. Watching Roadie 30 years down the road, I figured a movie that preserves a smile like nobody else's and puts it up there on the screen where anybody who wants to can see it, well, that was worth doing, even if the guys who wrote the picture (James BigBoy Medlin and myself) can't take a nip of credit for her teeth.

Never got to know Kaki. Nor her co-star Meat Loaf. I was too pissed at director Alan Rudolph to make new friends on that shoot.

It would take too long to explain the strange and wondrous twists and turns that brought Alan Rudolph and Zalman King into our lives. That's a tale of chance encounters, wild parties, and Big's walk on Venice Beach with the future daughter-in-law of Elizabeth Taylor. After which Alan and Zal got us a deal with United Artists to write Roadie for not much Hollywood-type money, but more than Big and I had ever seen.

We never thought to be screenwriters or to team up. That was Zalman's idea, for which I thank him belatedly. Friends doubted a Medlin-Ventura collaboration. Could Ventura, with his strained profundity, write comedy? Could Medlin, champion of laxity, be disciplined? Could they stop spending their newfound loot long enough to stay sober and work? And, with their Mount Rushmore-sized egos, duck and call the cops if they were to disagree.

But we never did. Without need of negotiation, we silently adopted a law of collaboration. It had but one clause: If either didn't like an idea, it didn't go in the script. Period.

Our deliberations were delicacy itself. For instance, I'd concoct a line or a "bit" and present it enthusiastically. Big would consider, bob his head seriously, and say, quietly, "Yeah, that might work."

Which meant: "Not in my fucking movie."

The bit or line would die like a gentleman, without fuss.

True, once in a while one of us was forced to threaten force – as when I obsessed about a woman and couldn't stop bitching about her and/or singing her praises. Big couldn't take it one more minute.

So he holds up his thumb.

"If you don't stop talkin' about that woman and get back to work, I'll ram this thumb into my right eye."

I reluctantly decided against that sacrifice.

The thing about the Roadie script that Alan Rudolph never understood was simply this: Cartoonish as it was, it was about us and people we loved.

Big had been a roadie for Doug Sahm. That's how we got the idea. Like Roadie's Travis, Big drove a beer truck before his gig at the Austin Sun. Travis W. Redfish, the character Big created in his column "Why Not?" (and played by Meat Loaf in the movie), was based on a friend of Big's. Roadie's B.B. Muldoon, Travis' best friend, was BigBoy Medlin's cartoon of himself. Lola (Kaki Hunter) was an amalgam of honky-tonk angels we knew and valued. At the time, we subscribed to Lola's notion that rock & roll was the world's most potent energy. When she spoke of the "cosmic mechanism of the universe" – that's what I thought my writing was about! Travis Redfish's lament – "Why is my life so much tougher than anybody else's?" – was something Big often said, deadpan, in self-satire (our lives being cushier than most). And the film's refrain, "Everything works if you let it," was our dearest hope.

Travis says: "I wish I was here. Maybe I'll get here soon. I think I'll just sit here and wait on myself." (Note for my fellow Yankees: "Wait on myself" is Texan for "wait for myself.") Big said that amid a major hangover. I wrote it down, and we put it in the script.

"Anything worth doing is worth overdoing" – we lived by that. It aged us, and maybe it was stupid – but we meant it.

"Only to excess" was kind of our philosophy of life back then. (We wrote Bird for Sonny. He was terrific. Funniest thing in the picture. Stole every scene he was in.)

Travis chair-dances – you need to see Roadie to know what that means – because Big chair-dances. (It's safer that way.)

We'd go to lunch at our favorite diner, and there would be a new, fetching waitress. Big would deadpan, "Ventura, that's the first woman I've really cared for as a human being."

He was funnin' himself and all us males, while obliquely noting a fact of life: Women are stupid about men, but men are much, much stupider about women.

We put it all in the script. Verbatim. Stuff we said and heard every day.

The set and the screen teemed with our friends. Ginger Varney, Ray Benson, Margaret Moser, Jeff Nightbyrd, Katherine Lyons, James Lewis (who went by "Little Pete"), and Big himself – they and many another show up in scene after scene.

Roadie, the script, was us funnin' at ourselves.

Roadie, the film, is something else entirely.

Alan's trouble was he didn't know anything about fun, knew less about funnin', and didn't know (and didn't want to know) people like us. He shot our script as though it was a cross between TV's Hee Haw and The Dukes of Hazzard. He didn't respect the people we wrote about and loved. He filmed them as though they were freaks – or slobs too ditzy to wipe barbecue sauce from their mouths. (That's not a metaphor; it's in the picture.)

He moved and jiggled his camera as actors spoke their lines – to prove he was a director, I suppose. It violated Mack Sennett's great dictum: "Comedy has to be shown. Let the audience see everything. Don't confuse 'em."

And Alan was flat mean to women who looked like maybe they didn't go to college. His camera laughed at them. In dailies, when I saw Alan's lingering, leering close-up of Kaki's rear end, well, I was so embarrassed I couldn't face her.

Alan took himself oh so seriously, far too seriously to identify with our characters. He made a movie to laugh at derisively, not a movie to laugh with in solidarity. His camera and our script fight each other every step of the way. Sometimes the camera wins. Sometimes the script. Meat, Kaki, Sonny, Gailard Sartain, Roy Orbison, Deborah Harry, Alice Cooper – they come through in spite of the fight. Heroic performances, considering what they were up against. And the music – the music makes its own stand and always wins.

Big reminded me the other day: "Some of it was our fault." The writing in the second half isn't tight. Added Big, in Alan's defense: "It's hard to film a Marx Brothers movie without the Marx Brothers."

The Medlin critique, 30 years later: "If you go to Roadie expecting nothing, you'll get that and more."

So why did I like the damned picture so much when I saw it on my antique VHS machine the other night? I got just as mad at Alan as ever, but even that was fun. Maybe Roadie reminded me of something we knew then:

Folly for folly's sake is worth some trouble.

For 30 years I'd made a mistake like Alan's: I took the film seriously!

What a boob. Because what was it, really, but our ode to our own folly and all our gawd-awful foibles?

Our younger selves reminded me that the more inescapable our flaws, the more they need funnin' and cherishing.

One, Two, Tres, Cuatro: Roadie
The shot about midway through 'Roadie' that travels from her sparkling shoes slowly up to her beaming face – that's Margaret Moser.