Your Style Avatar yearns for ... patchouli?! 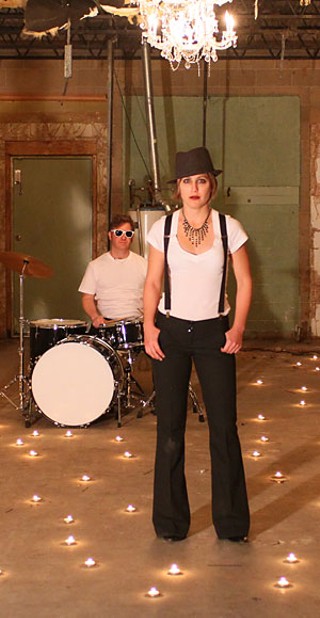 Josh Gabriel is in town working with Austin-based chanteuse Meredith Call on their "Winter Kills" debut. Josh and Meredith are doing mix-downs and shot a video during SXSW. You can catch Josh with Kaskade at 10:15pm, La Zona Rosa, Saturday night. (Photo by Seabrook Jones/www.juicythis.com)

ALLEY-CATTING Tuesday night seemed a bit like the calm before the storm. By Wednesday morning, the storm had arrived. After nursing a dreadful pain in my back, I went to the Visionary Art Show at Mark Mueller's historic compound on San Antonio Street. The Peacock House, a jewel box of a home, was decked high and low with some of the most eye-popping, psychedelic, surrealistic visionary art that I've seen since my youth in the Sixties. But I'm not going to go on about that now; we'll catch up with Mark and his band of merry artists, musicians, and film folk in a couple of weeks. After the exhibit, we retired to Mark's other house, next door, where he actually lives, for a dinner party that was definitely a consciousness-raising affair. It was a cross between a pagan feast, an artists' salon, and a performance by the Baja Marimba Band. OK, well, it wasn't really the Baja Marimba Band, just a bunch of guests who picked up some of the dozen percussion instruments lying around and went to town with a tribal beat that added a very primitive feel to this very swank party. The well-traveled Mr. Mueller has all kinds of delightful, mysterious, and meaningful objets d'art strewn about the palace. With Mark in one of his over-the-top exotic coats, combined with the music, food, decor, art, and guests, I got the feeling of having walked into a Chinese opium den. Not that there was opium or any other forbidden substances there, but the electricity that charged the party was cracklingly hot. I was sorry I hadn't worn patchouli oil, moccasins, and love beads.

THE VOYEUR Celebrity sightings on SoCo included A.J. Bentley, who plays Adam Ross on CSI: NY, who dropped by Goodie Two Shoes ... as did the amazing Samantha Mathis, who starred alongside Christian Slater in Pump Up the Volume.

SUN-BURN Another in the series of dispatches from the front by Sunny Haralson.

SUNNY SEZ I went to a party for the Marfa Film Festival the other night. I saw a lot of beautiful crocheted lace tops and dresses paired with black tanks or floral slips. One unfortunate wore what looked like a flesh-colored nursing bra under hers. Ladies: A bra is not a substitute for a shirt. The menfolk liked to pair a suit with sneakers. It's played out, guys. We get it ... you're alternative. The star of the evening was Robin Lambaria, the director of the festival, who floated through the party wearing a sea-foam-green floor-length vintage gown. It reminded me of a ruffled waterfall or a luna moth. "It was sewn by hand," she said while showing me the tiny stitches running up and down the fabric. I've never been that interested in Marfa; I'm tired of hearing people talk about it, and I'm not an outdoors girl, but her gracious enthusiasm has made me change my mind and put this year's festival on my to-do list.