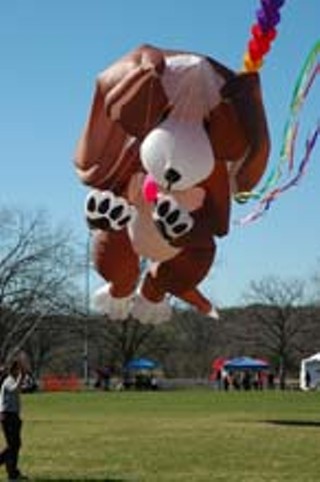 Sometimes a really cool kite can be almost as effective as a Labrador puppy in a bandana for attracting members of the opposite sex. It really depends on how you work it. Either one can set up the shot, but it's up to you to actually score. If you don't watch your puppy, there isn't much danger involved. It might gnaw on a toddler's leg, crap on a picnic blanket, or possibly be snatched up and carried away by a mastiff, but your liability index is still fairly low. Kites, however, can nosedive unexpectedly out of the clear blue and put out someone's eye. In a park full of children staring up at the heavens in wide-eyed wonderment, you don't want to be the asshole who was too busy trolling for strange to play out some kite string. Kids just ruin everything, don't they? You could almost forgive them if they could just hold their liquor and stop cock-blocking the MILFs, but they always seem to be underfoot, staring up at you with pleading eyes, dirty cheeks, and green-tinged rivulets of snot running out of their noses. Yes, puppies may have wicked bad sour-milk breath, razor sharp canines, and a penchant for ralphing in your car right after you get it detailed, but at least they don't dirt their drawers and then follow you around in an unholy cloud of funk screaming at the top of their lungs expecting you to clean it up. Talk about a mood killer. A pair of pendulous pampers will shrivel the average dude's johnson in no time – perhaps even send him into the priesthood, but a screaming child is every bit as much of a libido extinguisher. Regardless of what you see on the interwebs, most MILFs become completely uninterested in sex once a screaming child sends their mams into milk mode. (Bad news for all you lactophiliacs out there cruising the Craigslist for milking moms. That's a dry well … metaphorically speaking). To a single man on the make, a crying child is more of an annoying setback – especially since he's never completely sure how to alleviate his suffering other than put on a pair of noise-canceling headphones or maybe give the child a shiny object to play with … say a pocketknife or a cigarette lighter. The latter is a great way to find out who the child's mother is (if only to separate her from potential mates), but it can also make you a bit of a pariah. You might as well nosedive your kite into a toddler's eyeball. Puppies, on the other hand, attract the opposite sex better than really cool kites, but goddamnit if they don't attract children as well, which makes puppies a bit of a double-bladed sword. Unlike kites, puppies will also follow you home … sometimes even if you let go of their leash. If you let go of a kite, it will find its own home … often in the branches of a tree or wrapped around a power line, but at least it won't bleed you dry financially (dog chow, chew toys, linoleum, carpet, vet bills) and emotionally (screen-door whining, table-scrap eyes, Old Yeller reruns). Like a long-term relationship, a puppy is a lot of work. You don't need that kind of hassle – especially on a Sunday at the park. Maybe you should just build a really cool kite (still cheaper than a puppy) and head over to Zilker Park this weekend for the 82nd Zilker Park Kite Festival. You might not win a booby prize, but you could win categories like Steadiest Kite, Strongest Pulling Kite, Smallest Kite, Most Unusual Kite, or Largest Kite. Just remember, if you decide to go for Largest Kite, make sure your insurance policy covers collateral damage.