The producer who delivered the streamlined and elegant James Bond finale at the ASA fashion show? Webber: Sue Webber, of course. 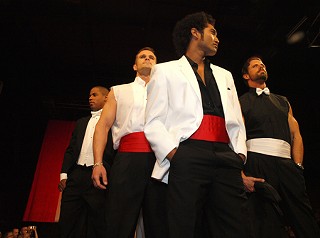 Male models from Sue Webber in the James Bond finale at Viva (Photo by Seabrook Jones/www.juicythis.com) VIVA GLAM Not even a dental emergency could stop me from attending AIDS Services of Austin's Viva Las Vegas: Monte Carlo fundraiser last Saturday night. I'd missed it last year so I could go to Houston and hang out with Lynn Wyatt and Candy Spelling, but this year? Forget it. I had to be there this year. The evening started at the home of Matt Easterling and Jeff Tippens at the Plaza Lofts, where we gathered for the short hop over to the Austin Music Hall. So many good friends were there that it was a real pleasure to have gotten out of the house, even with my snaggletooth. I wore all black-and-white formal wear with a twist (natch) and was very pleased to have the gorgeous Leeann Roundtree and singer Larissa Ness with me on the front row. I had on some fabulous black-and-white shoes I'd never worn before (Didn't somebody tell me once that you shouldn't wear new shoes out all evening?), but the way they started bothering me at Matt and Jeff's hardly foretold the torture I'd go through later. Once seated, however, the shoes became the star of the front row as I languidly crossed my legs and greeted every other fashion editor in town. The preshow babble and attempted auction failed somewhat miserably, but when the lights went down, all that was in the past. For the fashion show, ASA had hired Sue Webber to produce, so we knew there would be a streamlined elegance to it. Saks Fifth Avenue provided the clothes, Beyond Tradition provided the jewelry, and the show started off, somewhat typically, with sportswear. With a bevy of eye candy for men and women of all sexes, the models (including two of my favorites: Bobby Jones and Montana) stalked and strutted the runway with increasing drama. The swimwear segment was truly a feast for the eyes, and Sue had done a great job with the choreography. A couple of models (males) tried to show "personality" but probably should have just kept walking. By the time the evening wear segment started, the crowd was pretty much in a lather already. The James Bond finale was a breathtaking combination of beauty, choreography, and very stylish menswear. (Yes, I have to say it, those beautiful clothes were from Men's Warehouse.) The models paraded by in black-and-white tuxes, often revealing pleated formal wear shirts with the sleeves ripped off, or even no shirts at all under the tux jackets. Yup, that's the kind of wedding I want to have. Not that this was all so groundbreaking, but there were several factors that made it so dreamy and delightful. First off, the popularity of the Viva series that ASA puts on ensures that there will be a big crowd; the Music Hall was packed, and ASA's Micah King told me that the event had sold more tickets than ever, and despite initial reluctance, the crowd did give and give and give. Plus Sue Webber – I've seen many Sue Webber fashion shows. Sometimes they are typical mall-ish affairs that are distinctively low risk (nothing too shocking for Middle America), but you could always depend on the fact that there would be a handful of truly stunning models and that the show would be cleanly and sleekly presented. Hers are among some of the best shows I've seen in Austin; I've seen so many that they all seem to blend together now. And of course, there were the clothes. Great clothes, presented in a sexy, gay-centric fashion show that was perfectly geared toward the audience. It was excellent work from both ASA and Sue Webber. By the end of the evening, I was as pleased as the event producers were – even though I felt like I was walking on bloody stumps where my feet had been. The things we suffer for fashion, right?

REMINDER There is still time to get tickets to Zach Theatre's Red, Hot & Soul 2010 on Saturday night! Always exceptional and always a riot. www.zachtheatre.org.