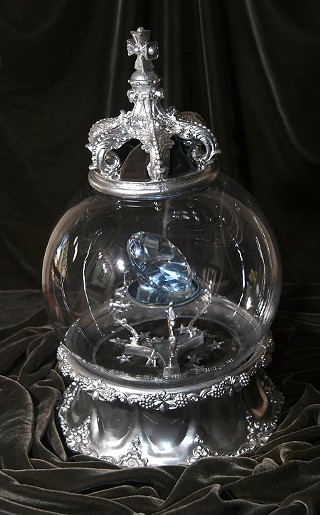 Given a fishbowl, our assignment from Karen Landa and Zach Theatre's Red, Hot & Soul party was to create a "snow globe" based on what Austin means to us. I put mine on a silver antique punch bowl stand, swathed it in gray silk velvet, sprinkled it with stars, and set a huge "jewel" on an electric revolving stand. On top I placed a crown, hiding an LED light that casts an eerie glow as the jewel spins and spins. What does it mean? It's my representation of Austin being the Crown Jewel of Texas. (Photo by Seabrook Jones/www.juicythis.com)

R.I.P. ALEXANDER MCQUEEN The most profoundly sad and profoundly disturbing news for me recently has been that of the death of designer Alexander McQueen. Or, as one Women's Wear Daily reader described it, McQueen's having "slipped behind the veil." I remember in the late Nineties when McQueen, Jean Paul Gaultier, and John Galliano were all cutting their teeth in fashion. I was so involved in the world of old-school couture, I hardly gave any of them a second glance. But before I knew it, they were couture. Instead of the young upstarts they had been, McQueen, Gaultier, and Galliano had become the establishment. These interlopers had hacked through the system to become the leading designers of the period, with their own collections, as well as those of the House of Dior and the House of Givenchy. The fashion world was on its knees as these three renegades ran delightfully roughshod over the past, trampling the old rules and conventions. They made us pay attention. In a world bedecked in dreary Marc Jacobs, McQueen was a true artist and entertainer. "In a world where every man and his dog is a designer, Alexander McQueen was the real deal," said milliner Philip Treacy, who created fantastical hats for the designer's shows. "His talent was supersonic." McQueen will be sorely missed, even though his past couple seasons have been problematic and he obviously had what could politely be called "issues." I can't imagine the pressures he must have worked under to create not just two seasons a year but up to 12 or 15. There were always whispers of drug- and/or alcohol-fueled binges, but that was somehow not at all shocking. From his humble, working-class London family, he burst on to the scene after graduating from Central St. Martins and having international style icon and editor Isabella Blow buy his entire graduation collection. In 1996, he was appointed head of the House of Givenchy at the same time Galliano was plucked from Givenchy and appointed head of Dior. McQueen had the world at his feet. But like many people who have the world at their feet, he was wracked with profound depression. Having untold riches at his fingertips couldn't touch it. All the jewels and glamour and beautiful women meant nothing. When he was alone, he was still the broken child he always had been, and when his mother died, he didn't know how to go on. Suicide is an act of desperation. No one really knows what goes on in someone else's head that makes someone want to do that, but I don't think there is a single one of us who doesn't somehow want to make the hurt go away. When McQueen hanged himself, he stifled a compelling and brilliant spirit. That, to me, is the saddest part.

THE SOUL OF AUSTIN Saturday, Feb. 27, 6:30pm: A night of dinner, performances, dancing, and live and silent auctions combined with a crowd of the most interesting, most accomplished, and most amusing people in Austin make Zach Theatre's Red, Hot & Soul 2010: Uniquely Austin one of the best stops on the party/social/philanthropic circuit. Skyrocket! will entertain, and the centerpieces on the tables are snow globes designed by local artists and celebrities illustrating what Austin means to them. (Full disclosure: Yes, I am donating one too, natch – a huge silvery glass and metal thing that spins and sparkles and enchants.) Go to www.zachtheatre.org for more info. Hurry!

TFHOF I've been up to my neck in DVDs. It's time for the Texas Film Hall of Fame Awards, and I've been busily selecting clips along with my able-bodied assistant, Stephen Rice, who has eagerly campaigned for and subsequently earned the title Assistant Bitch. (That's a slur against me, BTW, not him.) He's a doll to have worked with me the last couple of years, despite my peculiarities. Together we selected the clips for a TFHOF 10th anniversary retrospective, as well as the clips for Bruce McGill, Lukas Haas, and Catherine O'Hara (who will accept the Star of Texas Award on behalf of the cast and crew of Christopher Guest's hysterical Waiting for Guffman). Michael Nesmith will receive the Warren Skaaren Lifetime Achievement Award, introduced by artist Edward Ruscha. And what a coup for TFHOF to be awarding Quentin Tarantino the Tom Mix Honorary Texan award (by Rick Linklater), this year especially. Quentin, you're writing your name across the sky in letters a thousand feet high. Glad to have you back again. Plus, you can always expect the unexpected at TFHOF – there will undoubtedly be last-minute additions to the programs as well as unexpected celebrity attendees. Yippee! Go to www.austinfilm.org for all the details.