Who dat? Why, it's Your Style Avatar! 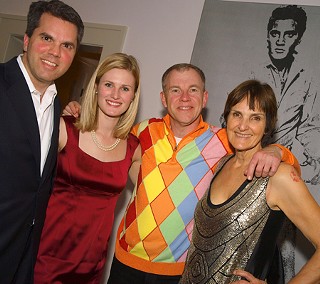 THERE WILL BE GOWNS What was Rihanna thinking? Her Grammy dress was too vile to think about. I understand the fembot alien look, but Rihanna's gown was a throwback to a time when drag queens created their own glamorous gowns out of sheets and anything else that was available. Well, at least the drag queens are pretty resourceful still, but on Rihanna, who must have had her choice of top designers, you could imagine it's the kind of dress that a pole dancer would select for her wedding.

CHARLOTTE'S WEB If you ever get an invitation to a dinner party at Charlotte Herzele's house, go. It is a treat not to be missed. I've been there three times now and am always enchanted by the Dalís, Picassos, Mirós, and Warhols hanging around the house like old friends. But Saturday night, the art took a backseat to the guests at Charlotte's Around the World in 8 Platters dinner party which she threw on behalf of Project Transitions' Guess Who's Coming to Dinner series of fundraisers. With delicacies from all parts of the world, the place mats were a map of the world, and we marked the map with the places we'd been gastronomically that evening. I didn't have my glasses on and couldn't tell Morocco from Mexico on the map, so I just happily marked here and there and imagined I was going to these glamorous far-off places. Rep. Mark Strama and the gorgeous Crystal Cotti were there, charming and delightful as usual, as were Anton Nel and Bill Jones, among many friends and neighbors. At one point we went around the room and briefly introduced ourselves. It seemed that so many accomplished people were so very modest about what they did that I kept having to interject facts about them that I thought were most important. Finally, Monsieur Strama said, "Why don't we just let Stephen Moser introduce everyone?"

TALENT SCOUT Attending one of my sister's teen band showcases at the Bob Bullock Texas State History Museum, out of all the youthful talent onstage, I was riveted by a young woman named Rachel Thompson from the band AfterMath. Singing through her long, side-parted hair, she resembled a young Janis Joplin. With a powerful voice and stage presence, I think this girl ought to work on her Janis Joplin repertoire for the inevitable movie offer that will come in a few years when she stars as Janis Joplin in a film bio. No kidding.

NO, REALLY? My sister, Margaret, announced that Peter Lewis of the legendary band Moby Grape would be playing with the equally legendary Explosives at the Austin Music Awards. While that didn't exactly have me running for the phone, I am fascinated by the fact that Peter Lewis is the son of the notoriously sanctimonious movie star Loretta Young. Oh, how my sister and I swooned when Loretta would come twirling onto the set of her television show wearing sumptuous New Look cocktail dresses and ball gowns. Needless to say, when her daughter Judy Lewis wrote her tell-all book Uncommon Knowledge about Loretta, I read it several times immediately and was riveted by Judy's story and how her mother refused for decades to admit that Judy's father had been Clark Gable. Please. All you had to do was look at the picture of Judy on the cover of the book and you'd swear you were looking at Clark Gable wearing a blond corkscrew-curl wig.

WTF? I have now seen into the Seventh Ring of Hell by watching the despicable Toddlers & Tiaras. This is a continuation of reality shows that cash in on the mentally ill (just look at the cast of Jersey Shore). In this case, the mentally ill are the mothers and grandmothers who dress up their 3- to 11-year-old daughters as little porn princesses. One mother was very concerned about sending her 7-year-old across the stage in a bikini (she thought it would attract creepy men, but duh, darling, that was already happening), but once she saw that all the other 7-year-olds had on bikinis, she relented.

WHO DAT? Well, I'm afraid it was me. Yes, something that has never before happened: me, screaming over a football game. I screeched with delight when I heard the score of the Super Bowl. Not that I care about football in the least, but as it was my native New Orleans Saints, I was delighted for their win. The city will return.