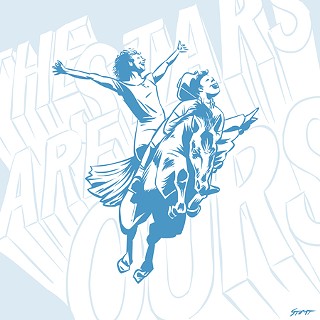 An exercise in "know thyself": List the Top 10 cultural artifacts that shaped you most. Be honest and unembarrassed. That's the dare. Try it first thing this New Year's.

Here I go, listed in reverse order. (Should it concern me that my Top 10 all found me by age 15?)

10) '100 SELECTED POEMS' BY E.E. CUMMINGS At 14, I began to explore the cacophonous funkiness that was Times Square. There was this bookstore, half porn, half not. The counterman's weary eyes didn't care I was a kid. In that neighborhood, child molestation was a misdemeanor, but the human wreckage in this joint posed no threat. Why did I pick up Cummings? To pretend interest in a real book while ogling dirty mags. Read a page for show. Wow. Fairly skilled at petty theft, I filched the book. What a find. Language could misbehave! Language could play! Language could dance burlesque or ballet. And they called that "poetry." And it opened worlds.

9) 'THE WAR OF THE WORLDS' (1953), DIRECTED BY BYRON HASKIN Scientists find the key to defeating the Martians just as the death machines descend on Los Angeles. They pile stuff into two trucks for a getaway to finish research that is Earth's last chance. A mob jumps the trucks, pummels the scientists, smashes their devices. Hope is lost. I'm 7 or 8 years old. Utterly shocked. The behavior onscreen feels genuine. I look about the dark theatre with a wordless "You can't trust these muthafuckas!" – sensing for the first time the disconnect between our intelligence and our fear.

8) At age 12, in one gulp, I read ANDRE NORTON'S 'STAR MAN'S SON,' 'STAR BORN,' 'THE STARS ARE OURS!,' AND 'STAR GUARD.' On every page I'm thinking, "She's way better than Robert Heinlein!" It's her prose. Nuanced, sonorous, not flat like Heinlein's. By 12, I wanted to be a writer, and this was my first great discovery: How you shape a sentence matters. Rhythm and sound are one with meaning. That's when I began to understand my mother's instruction: "Remember, words are music."

7) TV'S 'HAVE GUN – WILL TRAVEL' Richard Boone played the gunfighter Paladin. He wasn't a WASP! He looked like my people. And he wasn't taciturn. Paladin was intellectual and spoke well. Ideas mattered to him (many scripts were by Gene Roddenberry). Intellectuals could be tough! I'm 12. For the first time onscreen, here was someone I could imagine as me. It gave me a sense (boyish as it was) of the man I wanted to be.

6) 'MINGUS AH UM' Louis Armstrong's music (see below) was all the worlds that are. Rock & roll was a piece of my world. The music of Charles Mingus was the world, the world of any room or street I knew. Madness, violence, tenderness, thought, love, hate, depth: It was all in his music, a survivor's jazz, a jazz of survival, sounds I grasped but couldn't articulate, hearing Mingus while getting drunk for the first time with Dave, age 15. Mingus meant for his music to teach, and this it taught me: To be a survivor doesn't mean merely to survive; it means you survive and remember and make your remembrance matter.

5) TV'S 'THE BIG BEAT' AND 'AMERICAN BANDSTAND' You came home from school, turned on the TV, and watched those kids dance. Alan Freed's The Big Beat had black and white kids on the same dance floor – which is why he was canceled. Dick Clark's American Bandstand had white dancers but black and white performers (Jackie Wilson, Wanda Jackson, Chuck Berry), and the integrated group, the Impalas ("Sorry (I Ran All the Way Home)"). It was the late Fifties, early Sixties. Rock & roll hadn't fragmented into niches. You heard and saw it all, live, every weekday. Watching kids your age dance, imitating the dances, inventing your own moves – there was something to it, a thrilling bodily communication that has gone largely unheralded (perhaps because most critics I know can't dance a lick). Elvis had been the breakthrough, moving in public as no white man had dared, but this daily dancing, this almost-taken-for-granted celebration, set something free. By age 14 I could really dance. You can't learn anything more wonderful. To dance is, as Lawrence Durrell put it, "a beautiful behavior."

4) 'THE FIVE PENNIES' (1959), DIRECTED BY MELVILLE SHAVELSON A corny biopic with Danny Kaye as bandleader Red Nichols, but, oh my God, Louis Armstrong. His horn went right through me. That is not a cliché. His sound tuned and realigned my spinal cord (which I typed just now as "chord" – more to the point). Armstrong is, to use Duke Ellington's highest phrase of praise, "beyond category." His tone astounds. His liberty is absolute. What he does rises so far above its source it exists on another plane entirely. Used any money I'd earn or steal to buy Armstrong records, and, on the way, any record with a trumpet on the jacket, such as Miles Davis' Kind of Blue. My first serious tries at writing were prose poems about jazz. Jazz became my template for how I try to play the page.

3) 'HONDO' (1953), DIRECTED BY JOHN FARROW I'm this effeminate kid, very fey, never won a fight. I won't survive unhumiliated on the mean streets of home the way my Creator made me. But look at John Wayne in Hondo. How he walks, how he looks people in the eye – not defiantly, just evenly, almost solemnly. Westerns rated my serious attention. Wayne, Gary Cooper, Randolph Scott. I see they're not messed with because they know how to walk, how to stand, how to look eye to eye. Starting with Hondo, I imitate them. Took me a while, but once I got it down, the bad boys stopped messing with me. Which, in a way, was comical. I still couldn't win if they fought me, but they didn't know that anymore. If you stand a good stance and can meet a guy's eyes – not challenging, just meeting – you likely won't have to fight him. Where I've been, where I still sometimes go, that's important. Blessings on John Wayne. He showed me how to save my own life.

2) TV'S 'ROUTE 66' (1960-1964), WRITTEN BY STIRLING SILLIPHANT BEFORE HE WENT SAPPY In 1956 Gogi Grant had a No. 1 hit with "The Wayward Wind," a song about a rambler. It stirred me – even at age 10 or 11, I wanted to get out, get away, somewhere, somehow. To make the break, I needed a story, a model. Jack Kerouac's On the Road was fine, but I couldn't see myself in its characters. I was after something more than Kerouac's "kicks." Route 66's Tod (Martin Milner) and Buz (George Maharis) took to the road in search of meaning. Worked odd jobs wherever they went. Met incredible, marvelously crazy women – Lois Smith, Lois Nettleton, Julie Newmar, Tuesday Weld. And everywhere they went they found a piece of meaning, a fragment. Insights, not answers. Silliphant's Tennessee-Williams-on-the-jukebox dialogue blew my young mind. Tod saying: "We have to become lost before we can find ourselves, Buz. That's the kind of map you make up as you go along." So in high school they're asking me about careers: "I want to roam the country, work as I find work, meet gloriously crazy women, and write." They said I wasn't being practical. But I wanted nothing else, and it's what I finally did. All in all, it's worked out pretty well.

1) A WESTERN PROGRAM ON THE RADIO Learned to tell time waiting for it. Maybe Red Ryder? Can't recall. I'm 3, 4 years old. Mama and I would listen, so intent, while she smoked and I had milk and cake. Program over, we rearrange the furniture, act out what we'd heard, playing all the roles. She was 29-ish, gorgeous, brilliant. Nothing is more beautiful or more fraught with danger than a mother with her firstborn. I remember no details, only the cushiony sofa arm that was my horse. But my wee imagination in play with her wondrously strange mind – I suspect I learned more then than I'd ever learn again.