Letters at 3AM: The Numbers This Time

There exist co-enabling models of therapeutic and addictive wars

It's the numbers this time, the eloquent numbers. All the times since I was a kid that I've read about World War II and watched documentaries and seen feature films, I never really heard the numbers. But watching Ken Burns' 2007 PBS documentary, The War, it was the numbers – more than voices and images – that leapt to tell a story I had somehow missed.

It is a story, in part, of the difference between that time and this.

Don't worry, this is not a "Greatest Generation" tale. In that generation, to be anything other than a white, Christian, heterosexual male was to be subject daily to humiliations that today we'd consider extraordinary. The numbers tell another, larger story.

In the six years of that war – September 1939 to September 1945 – 70 million people were killed. That's Wikipedia's number. The War's number is "between 50 and 60 million." No one knows for sure, but any source will tell you the majority of those millions were civilians.

Some days were worse than others, but those are the averages. They give us a way to understand the enormity of what sometimes can happen to humanity. What we sometimes do. And how we, as a country, have changed.

Focus on particular events and breathe in the numbers.

When Bataan fell to the Japanese in 1942, 78,000 American and Filipino troops surrendered. Many were marched to a camp. The march took six days and seven nights, during which "six to 11,000" Filipinos and Americans died. Another 16,000 died in the camp (The War, Episode 1).

Americans attacked the Pacific atoll of Tarawa in November 1943. In four days, on a battleground slightly larger than Central Park, more than 3,300 Americans were killed and wounded (The War, Episode 3).

Have you heard of the Italian village of Cisterna? I hadn't. In one day in May 1944, we lost 995 Americans in the fighting around Cisterna (The War, Episode 3). Not a month later, in less than a day – D-Day – Omaha Beach received 2,500 American dead. Even so, the initial invasion cost "far fewer than [the] commanders had expected." By the end of August, however, Allied invasion casualties numbered 256,000 killed, wounded, captured, or missing. (The War, Episode 4). Those three months of fighting cost more than our total casualties during 10 years in Vietnam.

From mid-June to mid-July 1944, on the Pacific island of Saipan, "in almost four weeks of fighting, 16,500 Americans were killed, wounded, or reported missing" (The War, Episode 4).

In 1944, we attacked a Pacific atoll called Peleliu. Ever hear of it? Me neither. After the attack was planned, it was concluded that Peleliu had no strategic value. But the high command estimated an attack would take only four days, so why not? It took more than two months, costing America 1,200 dead and 5,274 "maimed or missing" (The War, Episode 4).

On the border between Belgium and Germany, there is a place called Hürtgen Forest. Heard of it? I hadn't. "The commanders who planned the battle knew almost nothing about the terrain and never came to see it for themselves. ... The first two divisions to be ordered into the forest lost 4,500 men in three weeks and moved less than five miles." It's said to be the longest single battle the U.S. Army ever fought – September '44 to February '45 – but no one brags of it. Its objectives were not, it turns out, strategically necessary. By the time we conquered Hürtgen Forest, its cost to America was more than 33,000 lives (The War, Episode 4).

And that's where I stopped, as far as The War goes. Anyone who can get past Episode 4 has something I don't, be it youth or nerve.

Since 2001, our dead in Afghanistan total 928; since 2003, we've lost 4,367 in Iraq (www.icasualties.org). In six months in the Hürtgen Forest we lost more than six times that combined total.

This in no way is meant to glorify the troops of yesterday or denigrate the troops of today. Each war is its own hell, a hell not to be judged by we who have not been there. What the numbers tell us, beyond argument, is that our national model of war has drastically altered.

In World War II the phrase often employed was "total war." Every walk of life participated in combat. Every citizen sacrificed for the effort. We paid for that war with higher taxes and war bonds. The objective was clear: "unconditional victory."

Now we have two mutually supporting strategies or models of war – and this has been true since at least the onset of the Vietnam conflict.

The primary, announced model is medical, as in surgery or therapy: We'll go in, heal the patient's ailment, fix what needs fixing, and leave. When we leave, everything is supposed to be better. Whatever the rhetoric, in reality victory is defined therapeutically – not winning, but solving a problem.

The underlying model, however, is very different: addiction. No matter what, and no matter the cost, we'll keep on doing what hasn't worked until it does. That is the very definition of addiction, with addiction's financial rule: If we don't have the money (and we don't), we'll beg, borrow, and become debt slaves until what can't be done is done.

They say everything goes faster now, and that's largely true of everything but war. With these co-enabling models of therapeutic and addictive war, war continues in a kind of slow motion. The objective is vague. It's often hard to tell who the enemy really is. The front line is everywhere and nowhere. We suffer far fewer casualties (partly because medical attention is better and more immediate), but war goes on and on and on.

Addicts go on and on until the infrastructure of their lives falls apart. Their health, money, position, and ability to deal with daily problems slowly collapse into a heap of incoherent helplessness. Even so-called "high functioning" addicts, who present to the world a facade of ability, eventually hit that dead end where life can no longer be faked – at which point either they deal with their addiction or sink into oblivion.

Episode 3 of The War relates that 12,000 were drafted from the Connecticut town of Waterbury. "Each man received a prayer book and a carton of cigarettes, courtesy of the Shriners." They were everyone's sons. Now we encourage them not to smoke and they are the sons and daughters of a decimated working class.

We're broke. Our credit is running low. The therapeutic/addictive model of war will change not for moral or strategic reasons, but because of its expense. Then our sense of ourselves as a nation will alter deeply, and that will change each one of us before we realize we are changed.

'There To Tell the Truth'
Seymour Hersh on journalism, politics, presidents, and war 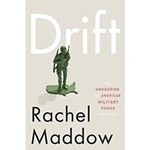 Win a (Reading) Date With Rachel Maddow!
Sign up for the Newsdesk newsletter to enter to win