A tale of teenage luck in New Jersey

Sometimes it's good to slow down a bit, look around, and assess where you are and how you got there. Bits and pieces of a life don't always make immediate sense but do offer information if you take some time to contemplate them. Getting you to where you are usually takes more than a village but perhaps less than a nation.

If you had asked me before it happened, I would have told you that I thought that first real kiss would have changed everything, that it would mark the end of one part of my life and the beginning of another. She came over to my house just to give me a haircut; we sat at the same table with my friend Steve in study hall. I told him I needed a haircut. She volunteered.

In my sister's room, with the lights out, waiting for her boyfriend to pick her up, we kissed. Did my life start then? Or was that when it began to end? I only wished I loved her so much better than I did. The only thing I knew was that I would never have such a perfect kiss again.

It was autumn 1967. Her boyfriend looked like the kind of New Jersey suburban hood with a souped-up car and greased-back hair that Andrew "Dice" Clay would later faithfully imitate for his act. Clay was at least attempting to be funny and somewhat ironic, whereas her boyfriend was dead-on serious. I was so awkward that I made nerds seem unusually endowed with social skills.

Maybe 15 years ago, maybe 10, but certainly not before that, I finally realized how remarkably lucky my life growing up as a teenager in Jersey had been. At the time, I was so wrapped up in angst and suburban existential despair, so overwhelmed by learning issues, lack of attention span, and a sad lack of aesthetic, musical, and athletic skills that I felt impossibly awkward. It wasn't anything as simple as missing the forest for the trees. It was far more like I was so obsessed with the possibility of fire ants that I scoured the ground constantly, never even looking up to notice the trees, much less the forest.

There are a number of sections to this story. They don't quite fit smoothly together, presenting one solid picture, as with a jigsaw puzzle. Instead, when all the pieces are laid out, they imply and suggest a lot. But they are far more jagged, disconnected, and random than a puzzle. In the next column, for example, the first film version of Edgar Rice Burroughs' Tarzan of the Apes, a silent film starring Elmo Lincoln, as well as a comic book collection including every one published between 1942 and 1953, will be part of the narrative. At least that's what I'm thinking now.

An important part of the story is a thread that begins in 1962 or 1963. We were visiting my father's brother Harry, his wife, and their two teenagers in Queens. They were teenagers. I wasn't yet. Uncle Harry gave me some change to go to the corner store to buy some comic books. Sure, I knew Batman and Superman, but there was a title there I'd never heard of: The Fantastic Four, issue No. 3. Whenever the opportunity has presented itself in the twisted byways of popular culture, I've always opted for the unknown (thus the new, at least to me). I bought it.

Very early on in The Fantastic Four's run, there's a scene in which Johnny Storm is in a Bowery flophouse. The radiation that transformed the other members of the group into superheroes – including changing his sister, Sue Storm, into the Invisible Girl – had turned him into the Human Torch. He wasn't entirely happy about this but wasn't entirely unhappy. During those times when he was enjoying his newfound power, he wasn't disciplined at all about it.

This was the beginning of the time of Stan Lee and Marvel Comics, when real-world angst and drama began to be a crucial part of the storytelling, both in character portrayal and as overall metaphoric ambition.

In the flophouse, Johnny Storm saw a face that looked familiar, though heavily bearded. Getting one finger to flame on, he shaved the seeming bum. It turned out that this was an amnesiac Prince Namor, the Sub-Mariner. It was immediately made clear that Sub-Mariner was a superhero from World War II comic books. Comic books had a past? They had a history? I was fascinated and excited. The very idea was intriguing.

Soon after this, Leonard Maltin became one of my best friends. An established film historian and critic, Len is now on Entertainment Tonight, curates DVDs, and writes film and radio history, as well as editing and contributing to the annual edition of the Movie Guide book. Then he was an unusually mature teenager, comfortable with going into New York City (about 15 to 20 minutes away) after school or on weekends to watch movies. I joined him on these journeys, and a world I never would have prospected on my own was opened up to me.

There is a photo of Len and me from around this time that I really should run in this column at some point, as it so completely captures how hopelessly dorky we were in many ways.

I became a regular visitor at Len's house, hanging out for the day or connecting with him to travel into the city. Len always had unbelievably wonderful stuff to show me. One afternoon, as I waited for him to get things together so that we could go catch a bus on Route 4, knowing of my interest in old comic books (which he shared but not nearly to the same extent), he handed me a sales list to read while waiting. It was a mailer from comic collector and dealer Phil Seuling.

Addicted collector that I am, I still have the list somewhere, although, mimeographed on orange paper, it is now very worn. The prices for the comics being sold seemed outrageously high at the time, but now, looking back, they seem so ridiculously cheap that it brings tears to my eyes. For example, Golden Age comic book titles that I knew essentially nothing about, like Black Hood Comics Nos. 16-19, were $2.50 each; Boy Commandos Nos. 2-5 were $5 each; Green Lama No. 3, No. 5, and No. 8 only $2 each; and Exciting No. 9, which introduced the Black Terror, cost a whopping $20. Not to mention the heroes I knew: Superman No.1 for the astonishing amount of $60 and the just-reintroduced Captain America No. 2 and No. 5 for an equally astonishing $16.50 each. Depending on condition, each of those books now costs in the tens of thousands of dollars.

Seuling also included in his list information about how to contact and purchase a short list of comic collector fanzines. Off that list, I ordered copies of the Rocket's Blast Comic Collector (RBCC) and Alter Ego No. 7, edited by a fan named Roy Thomas.

When I got Alter Ego, I was ecstatic. In the mail section of the fanzine, there was a long letter from Otto Binder, legendary comic book and science-fiction writer, in which he commented, "My present day home in Englewood, New Jersey, was dedicated at a Fawcett Party as being 'The House that Captain Marvel Built.'" Englewood was the town next to Teaneck, which is where I lived.

Otto Binder, writing under the pseudonym Eando Binder, was one of the major science-fiction pulp magazine writers between 1939 and 1941. After that, he wrote comic books for decades, returning to writing science fiction as well along the way. As a comic book writer, he wrote most of the Captain Marvel Adventures for Fawcett, from issue No. 9 until the company stopped publishing comics in 1953. During the late Fifties and Sixties, Binder was crucial in helping reinvent Superman by expanding the nature of the world in which he lived, introducing Supergirl as a character and imaginary and untold tales, as well as the very strange Bizarro World. Over the years, he wrote for literally dozens of other comic books, including Captain America, The Shadow, Mighty Samson, Spy Smasher, Black Owl, The Young Allies, and Kid Eternity.

In a move completely out of character for me, I wrote him a short letter. Otto invited me over to his house to visit, which I did in late autumn 1974. The meeting with him turned out to be only the first of many such meetings and the beginning of a deep friendship that lasted the rest of his life. Over the next few years, until I went away to college, I was a regular guest at his house. There were long stretches when I was there almost every weekend in a row for months, although during other periods my visits were far more infrequent. My relationship with Otto, coupled with my friendship with Len, changed my life in a whole range of ways. Many of these were near-miraculous in terms of the adventures I was afforded. Typically, I was going so fast in my head, with the shortest and most random of attention spans, that I completely missed savoring the experiences.

To be continued next week. 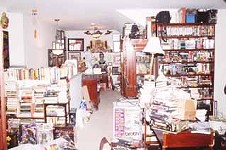 Bullish On Comics
Del Toro Gets Serious About the Funny Papers