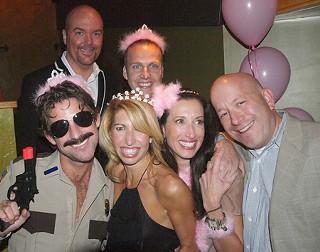 HARDY HAR-HAR I received a gift card to Sephora for my birthday. (I could almost hear Neil Diaz screaming in the background: "Fragrance, Christine! He needs fragrance!") So there I was, gift card in hand, scanning Sephora's large and lovely selection of fragrances when I came across Ed Hardy Men and Ed Hardy Women. What? Has he licensed people now? You mean you could actually be or have an Ed Hardy Man or Ed Hardy Woman? What do those people look like? (You and I both know the answer to that question.) As distasteful as the notion sounded, I was loath to believe the manufacturers had actually captured the essence of Ed Hardy in a bottle. After all, what is the essence of Ed Hardy? Eau de Ed? Haute and Hardy? And when, since I knew him in the Eighties, did he stop being Don Ed Hardy? I mean, really. Is the essence of Ed Hardy different from the essence of Don Ed Hardy? Or did the backers feel like someone with two first names sounded too NASCAR? Don Ed Hardy and my brother-in-law Michael Malone (aka Rollo Banks) were both acolytes of Norman "Sailor Jerry" Collins, and they learned the craft of tattooing very well. (Hori Smoku Sailor Jerry, a documentary on Collins in which both Hardy and Malone are interviewed, is playing at the Alamo Ritz, Tuesday, Nov. 10). When tattoos became de rigueur for the "alternative" set (about a thousand years ago, it seems), both Rollo and Don Ed flourished. But Don Ed became Ed, and Rollo died. But Rollo would have laughed long and hard at the idea of Don Ed selling out like he has. The "official" Ed Hardy site (www.edhardyshop.com) turns out to be Ed Hardy by Christian Audigier, but how can it be by Ed Hardy if it's by Christian Audigier? And why does the site have a bio of "Don Hardy?" Who is it that we're really buying when we plunk down $200 for a real Ed Hardy by Christian Audigier? Right now you can buy Ed Hardy purses, underwear, bedding, shot glasses, and apparently even something called the Ed Hardy Lifestyle. But if you think you've found salvation by going to www.donedhardy.com, you'll be disappointed to see that it is also by Christian Audigier. It's as if Christian Audigier created Ed Hardy as a marketing gimmick for belts and backpacks and motorcycles so that you too can share the taste of such "stars" as La Toya Jackson and Jon Gosselin). It's almost as if Ed Hardy has ceased to be a presence of his own and Christian Audigier owns him, lock, stock, and barrel. Evidently Mr. Hardy felt the same way and socked Christian Audigier with a $100 million lawsuit earlier this year, with Hardy charging that Audigier underpaid him the royalties he was due, that Audigier underreported sales for the clothing, and that Audigier had violated their licensing agreement by producing Ed Hardy accessories. But that seems to have been settled amicably last August – apparently Audigier forked over some more money to appease Hardy, and they renegotiated their contract to include all the swag. I guess the real lesson here is that if you can't afford an Ed Hardy tattoo, you can always have an Ed Hardy mouse pad.

OUTWARD BOUND Darling Maria Groten is co-chair for the annual Dancing With the Stars Austin benefit for the Center for Child Protection on Sunday, Dec. 6, at the Hilton, featuring Zach Theatre's Dave Steakley, KEYE's Michelle Valles, and many others. More info can be found at www.centerforchildprotection.org... Coming up is something new from former Rare kingpin Matt Swinney's Launch787 on Sunday, Nov. 8, noon-6pm at Mosaic at Mueller. With more than 50 boutiques, designers, and artists, it's a fundraiser and book drive for Dell Children's Medical Center. Details are available at www.shop787.com. One of the boutiques that will be showing at Shop787 is the Second Street District's Beyond Tradition. This store has dazzling jewelry from a number of sources, including local designers. Owner Kappie Bliss has outfitted me in jewelry several times, and I just can't resist going by frequently to see what's new... Saturday, Nov. 7, 7:30-9pm is the Runway to Heaven fashion show benefiting the Austin Children's Shelter. This is a dazzling annual event featuring glorious design work. See further info at www.runwaytoheaven.com.