Are eight arms enough to hold Stephen in fringed buckskin? 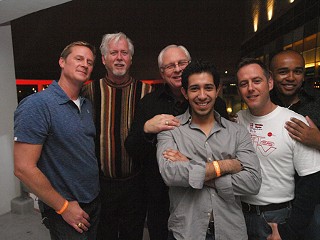 EIGHT ARMS TO HOLD YOU Without the phenomenal power that the Octopus Club (www.octopusclub.org) wields to raise money for HIV/AIDS care in this city, we'd be in a bigger crisis than we are now. It's 3:35am, and I am just winding down from the fabulous 14th annual Octo Tea Dance, lying on the sofa of Mark Erwin and Stephen Rice, who are among the major players in the charity (along with so many others). I'm content and serene, and I kind of love working in the middle of the night. So the party started 12 hours before, and it was a long time before we could lay down our weary burdens (I had no weary burdens; my dear friend Charlotte Herzele and I arrived at the Long Center in the unbelievably luxurious Mercedes MobileJet that I mentioned a couple of weeks ago). Deplaning into a horde of paparazzi, shooting our photos and asking about the ride and who we were. The rain ruined the outdoor portion of the party, which, after much tough decision-making, wound up being entirely within the Long Center. But did it ruin the fun for thousands of guests? Hell no. The Octopus Club has so much to be proud of. Octo Tea has raised more money than ever before for the Paul Kirby Fund of AIDS Services of Austin.

Herzele and I wandered into this lounge where fashions from Lilly Pulitzer and other stores were being shown on pedestals. It was a confusing lackluster presentation with some of the models acting like they had no idea what they were supposed to do. One hottie decked in a beautiful caramel buckskin jacket simply could not do the coat justice. "Let me try it on?" I asked him. "Sure, I guess so." Sliding it on my body, it fit perfectly, and I showed the model how it should look. I was entranced. I could not live another moment without owning it. I took off my beret to pass around to collect donations so that I could buy it – at $800. Mercifully, Herzele absolutely agreed that I couldn't live without the coat and told the stylist that she was going to buy it for me right off the runway. There was much back and forth about it just being a sample, and I finally thought, "Do you want the $800 or what?" By then, they'd seen the wisdom of our approach, and within moments Herzele had the coveted coat clasped in her hands, and she presented it to me. I was floored. I couldn't believe she had done such a kindness and thus determined the direction of my fall/winter style. Buckskin fringe combined with my breastplate made of turquoise and silver, and suddenly I felt like a modern-day Dr. Quinn, Medicine Woman. Sex-eee, huh? The ever-glamorous Patricia Paredes spent a great deal of time with us; her beauty seems to make everyone beautiful, so afterward, we took the MobileJet back to Paredes' glamorama apartment. Chatting, chain-smoking, drinking, eventually we all drifted away to reflect on the event. It's the best party every year.

BABBLE An interesting quote from that crabby (and apparently homophobic) Coco Chanel from a July 1967 McCall's Magazine:

"'They' talk in France of 'le temps des assassins' (the time of the assassins). But they never refer to another verse: 'Quand les hommes etaient forts, ils etaient chasteset doux' (When men were strong, they were chaste and gentle).

"Both are from Rimbaud, but they like only to quote the first. And they talk of virility.

"Often I think I remain in fashion only to defend women from them.

"They hate the dresses they are making for women, because they wish they could wear them. So they make them unwearable.

"What do they know of women, they who are not men?

"And what do they know of men, they who are not women?"

DRIVE-BYS The luxurious III Forks restaurant has teamed up with Dress Shop on Congress to offer a fun and intriguing Gal's Day Out in the form of a fashion brunch and style show, Sunday, Oct. 18, 11:30am-2pm. Mimosas, a style show, and mystery gift cards. Tickets are $35. For further info, contact Shawn Farmer at III Forks: 236-0124 or e-mail austinbanquets@iiiforks.com... Our favorite place for cheap and chic womenswear is Goodie Two Shoes on the sizzling SoCo strip, and nothing sizzles more than getting to save 10% on total purchases of $50 or more. Limited to regularly priced items only, this sale will only run Thursday-Sunday, Oct. 15-18... Ron King, owner of Bô Salon, confided in me that he will be opening an additional salon at the Four Seasons, under his own name.