Page Two: And It Was All Right

Notes on a life saved by rock & roll

I'm in a tortured dream straight out of "The Sorcerer's Apprentice" sequence of Fantasia, where Mickey Mouse gets a few brooms to carry the buckets of water that are his chore to carry but then falls asleep. While out of it, Mickey misses that the brooms keep multiplying, and the water floods over everything. Fantasia is a film I've always admired more than liked, without even admiring most of it all that much. But it is a great nightmare trigger. I'm deeply sleeping, both states – sleep and, especially, deep sleep – being rare. In my dream there is water everywhere and everywhere water. Lapping at the edges of the water, as well as driving it, geyserlike, into sporadic eruptions, is chaos.

Dreaming of the swelling flood, I'm haunted by other things as well – deeper things that are more of the desert than the sea. No longer is each broom in supernatural servitude to Mickey; instead, they've become representative of the never-ending piling up of anger by some small group of our readers. It becomes the layering of another letter wrapped in the writer's purity while pouring forth vituperation on so many others, the religions assaulted, the hypocritical righteousness, the self-anointed talking-head pronouncements of judgment, and the too-seriously intoned, self-sanctified attacks. Shorn of the many thoughtful comments, articulate ripostes, differing views, and careful attempts at dialogue, the rest melds into an emotional sludge. If it is not drowning me, then I'm surfing it.

Tumbling out of Disney and into M.C. Escher, the Chronicle fades from a weekly publication, from work and joy, into another tortured and torturing dream. Lacking any coherence, it is one where there is no longer black and white; there are no longer words and meanings. Instead, with my deadline in the rearview mirror, the misshapen words that I'm trying to herd together into thoughts and meanings are more wild and uncooperative than ever.

Often, I find myself daydreaming of the scene in The Wizard of Oz in which they replace all the scarecrow's straw stuffing. Physically and mentally, I'd love to be so cleansed. I wake, shower quickly, sit down to write more, but this time put on rock & roll to block me from part of myself while also bringing me back into another part.

Last night, I was watching a film on TCM starring Carole Lombard. She was at a nightclub, doing a feathered fan dance. Her beauty was subdued, and the radiated joy that was her aura was missing. Moving the fans, she seemed overwhelmingly sad. The film was heading toward its ending, so the dullness soon faded. Bizarrely, I felt a terrible ache, a sympathetic, almost two-thirds-of-a-century-old, empathetic connection to husband Clark Gable, searching for Lombard after her plane crashed. Hoping against hope that she survived, he is facing a faded light that will never return.

"I walked by the Stop n Shop

Then I drove by the Stop n Shop

Cause I had the radio on

I felt in touch with the modern world

I felt in love with the modern world

Cause I had the radio on

With the radio on"

It is so much better to drive by the Stop n Shop than to walk by it, because when you drive by it, you can have your radio on!

Sometime back, I quoted some lyrics from "Roadrunner," only to have a columnist writing elsewhere argue that I had gotten them wrong. He not only offered a corrected version but then denied me the right to know, quote, or believe in "Roadrunner" because, as he saw it, I produce shows rather than make music, which marks me as corrupt.

For the record, there are many versions of the song; these lyrics are from one of them. In just a while now, the bully boys of pure-rock devotion are going to drown me in a medieval-type test of my purity as they indict me for rock & roll impropriety. The test might be tying me to the train tracks or maybe just throwing me in to the ever-rising floodwaters of their contempt. If I don't die, it proves what a corrupt, soulless parasite I am – and if it does kill me, well, that really is all I deserve, given my intimate relationship with the devil and the steel whores.

I've always been in awe of those people who continually operate in absolute certainty of the rightness of their actions and thoughts. Never sure, actually more happy lost than found, during the mildest of days on the calmest of waters, my sea legs have never been steady.

On and off, I'm thinking about rock & roll and how it has saved my life again and again, as have so many kinds of culture – movies, comic books, poetry, short stories, novels, TV shows, and who knows what else – but it never really saved my life as though it were a life preserver, tossed to me while I was drowning, that I knew nothing about (who tossed it, where it was tossed from, what the life preserver was made of).

The music is never separate from those who create it. It showed me how to live; it blessed the gathering of my energies, the slow regroupings after the many disappointments. Rock & roll inspired and restored me, demanding that I move forward while denying all avenues of retreat. I was centered by noble acts of culture, baptized in the creative output of geniuses. The point that is so easy to lose and so hard to maintain is to live your life with honor.

It makes no sense here, but all I'm thinking of are the stories that Andy Warhol superstar Ondine told about being Edie Sedgwick's French maid. Sleeping in Central Park, he'd wake in the morning and walk over to her apartment, where he assumed his duties.

The Beatles are again everywhere, again jump-starting the culture, again offering joy and attacking complacency while defying all expectations. Here is legendary producer Bob Johnston reminiscing about touring England with Bob Dylan & the Hawks and then remembering when the Beatles and Dylan met.

On tour: "I went to England with Dylan when he first went electric and was playing with the Hawks. [The Band was then called the Hawks.] I thought the Band was so amazing. I worked with them on a bunch of stuff with Dylan. Rick Danko, Levon Helm, Garth Hudson, Richard Manuel, and Robbie Robertson, those guys, man, they were amazing talents, and also they were amazing people. They came through with Dylan's sound there for a long time.I know I was there in England recording what would much later become the 1966 live album with Dylan and the Band.

"Then Levon got really tired and had to go back to the States.We got in another guy who used to be with the Fifth Dimension or something – can't think of his name.But he was ... Dylan said he was the best drummer he ever had in his life.

"I recorded Dylan with the Hawks in London, Manchester, and Sheffield. This was when he first went electric.

"I did all the stuff, took my wife there on her birthday, took two of my sons; they went with me all over Great Britain.

"What they did at first was that they never would put this live album out. Last year, it was finally released. Recorded in 1966, released four decades later, Rolling Stone said it was the best live album ever made.

"And the producer's name on the record was Bob Rosen.

"Bob Rosen is a wonderful guy and a good buddy of mine. Bob runs Dylan's stuff. Dylan always bats everything off of him.

"Dylan said to him, 'Bob, I didn't know you did that.' Rosen answered, 'There wasn't any producer name on it, so they just put my name on it!'

"When I told him that I was the producer, Rosen said, 'I'll help you put your name on there.' But they gave it to Rosen – he was only 6 years old when it was recorded! This is the live 1966 Bob Dylan recording."

Meeting the Beatles: "Dylan was staying at the Mayfair Hotel in London, where it ended up with him and with the Beatles up on the bed. They came to see his concert. I remember that the Beatles walked in to see Dylan in his room. He talked to 'em all night. He'd come back and forth, but he'd talk.

"When the Beatles entered the hotel room, they were the Beatles. When they left it, they weren't the Beatles anymore. They were John Lennon, George Harrison, Paul McCartney, and Ringo Starr, in terms of how they thought of themselves.

"That's who they were; they were different people. It went from there. You can check it: when that happened, how it happened, what happened."

From an interview with Johnston the next day: "They said they had a poll of 185 people in the music business, and they voted that [Blonde on Blonde] No. 1 over the Beatles. That's like I told you yesterday, about Mayfair, remember? They were like the Three Stooges! 'Hey, John, Paul, Harry, whatever your name is.' When they walked out of that hotel, they were different people. I saw it." 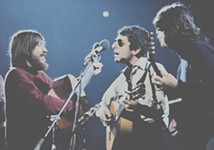 Is It Rolling, Bob?
Bob Johnston produced some of music's greatest albums