Stephen's Home Alone adventure was not at all like Macaulay Culkin's 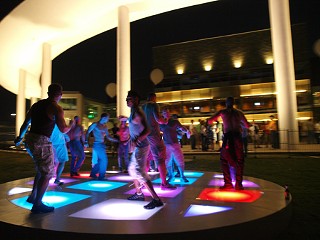 The scene from last year's Octo Tea Dance merely hints at what a great party it was. Come out this Sunday and see for yourself. (Photo by Seabrook Jones/www.juicythis.com)

GO TO Well, my social season hardly begins until the Octo Tea Dance happens – and it happens this Sunday, Oct. 11, at the Long Center. It was so fabulous last year that this year's ticket sales are already dwarfing last year's. But that doesn't mean there's not room for you, my little chickens. Because it's the Octopus Club raising money for AIDS Services of Austin (www.asaustin.org), every single penny that is earned goes to ASA for its Paul Kirby Fund to help those who are living with AIDS. An excellent cause and a great party – and you're sure to see plenty of friends there.

WENT TO Last Thursday, I went to a party with Elvis Presley. "How so?" you might ask. Well, all you have to do is be Charlotte Herzele's friend, and you too can sit and have cocktails with Elvis. Of course, this Elvis isn't real. It's an original larger-than-life Silver Elvis, a silkscreen by Andy Warhol, a gift from the legendary Joe Dallesandro (my new friend on Facebook) to Charlotte (oh yes, she runs in those circles). At one point, I sat alone in the room staring at Elvis, Elvis staring back at me. I was in heaven being able to spend some alone time with Elvis. But that was my favorite among the Picassos, Dalís, and Warhols that adorn Madame's new palace. The event was a fundraiser for the Marijuana Policy Project, held at Charlotte's house, and it was a blast, as are all of Charlotte's parties. The executive director of MPP was there (sorry, he obviously flunked Social Skills 101), as was the gorgeous, glorious Connie Nelson, with her beautiful and talented singer-songwriter daughter Paula Nelson. I had VIP on my name tag, so after leaning on my cane for some time, I sat down on the couch, listening to Paula's band (including Mark Epstein and Kevin Remme) tune up for a performance. I was so rapt at the sound check that when the band started playing, I found out that where I was sitting was tantamount to sitting on the stage. Connie and Paula told me to stay where I was, and I was treated (along with the other guests) to a short set by Paula. Did Connie raise her daughter right, or what? What a charming talent she is, and OMG, can that girl sing! The unquestionable fact is that Paula will be famous for her songwriting in the same way Lucinda Williams is – one of the best. Amos Ewing and Lyova Rosanoff also performed silly little ditties about marijuana to an appreciative crowd. And, no, the other guests were not aging hippies and social dropouts – they were some of Austin's business, political, and social leaders, even if most of them asked that their names not appear in my column. It's the only party I've ever been to where guests didn't want to appear in print. But Jessica McMillen (the dangerous blond supermodel I've mentioned before) didn't care; Stephen Rice and Mark Erwin didn't care. But it's a good cause, espousing the rights for medical marijuana – something I might need, as things advance.

ALSO WENT Tuesday night, I was alone at home for the first time in ages. Both my mother and my sister had gone to New Hope, Pa., for a family gathering that I was unable to attend. I reveled all day in aloneness, feeling like I should strip off my dressing gown and go screaming naked through the house. I made a lovely dinner, watched television (imagine), and began to develop flulike symptoms shortly thereafter. Hideous. My head felt like it was going to explode, every muscle and joint ached, my fever was raging, and my lower gut was definitely trying to tell me something. I was panicky and scared, not knowing what was going on. I felt bad enough to call my nephew to come over in case I needed help. I did need help, but it was beyond Tyler's skills. Moaning, shaking, and wracked with pain, I scared him. He called his dad (my brother Scott) to come over, and by the time they arrived, I was pretty much a senseless mess, delirious and foaming at the mouth. I was afraid because suddenly my cancer was all too real, and it was the first time, besides minor pee problems and major fatigue, that I was really aware of it. My brother would not take no for an answer when he tried to get me in the car and go to the hospital, and it took Tyler, Scott, and his wife to bundle me into the car. I howled like a banshee when the waves of pain washed over me and was completely helpless. I was rushed directly into the ER and given something for the pain. After much discussion and testing, it was determined that because I hadn't been able to pee, the urine was backed up into my kidneys, causing a widespread infection. I know, it's not a pretty subject, but writing about it means I have to tell fewer people about it, and talking about it is something I really don't like.