It's always a fiesta in Texas, but what is it when your Style Avatar goes to Fiesta Texas? 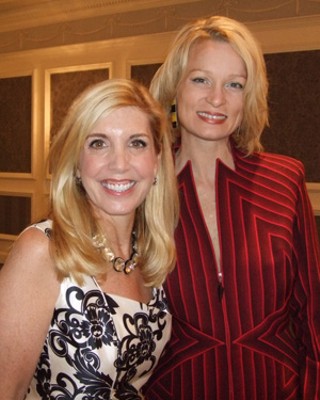 Hospice Austin's Annual Beauty of Life luncheon featured television's Charla Krupp (l), author of New York Times bestseller How Not to Look Old, along with the chair of the fundraiser, Anne Elizabeth Wynn (r), who spoke eloquently at the very well-received event. (Photo by Melinda Marble)

IT'S A DEATH TRAP. IT'S A SUICIDE RAP. Last month, when my niece and her pal were in town, my sister Margaret had an appointment in San Antonio, so we decided to all pile in together and go to Fiesta Texas. The part that I didn't think about was the part in which I alone had to chaperone teenagers in a theme park. As a kid, amusement parks were sheer heaven. I'd become bonkers at them, even getting lost at the New York Worlds Fair in 1965. But not so many years ago, climbing into a metal death trap and getting strapped in so you can turn upside down, hurtle to the ground at 60 mph, make a gut-wrenching turn at the last second, and fly free through the air sounded like a good idea. Resting beforehand and gathering my strength, I boarded Goliath – the scariest looking contraption I've ever seen. We even waited so we could be in the front car of Goliath. And was it worth it? It was terrifying. And not in a good way. I tried the Coast to Coast, which is another mechanical death wish. After that I was so exhausted, I became like one of those old people who sit in the theme parks waiting for the rest of the family to get it out of their systems. I sat and sat. And sat. Then I began to explore the myriad methods by which I could spend money at the park ... and believe me, there are many. Soon, my precious cargo arrived back to me all in one piece, and I said: "That's a wrap, girls. Let's hit the road." The next couple of nights at home, we didn't see Annie and Brenna – except if we turned off the kitchen light and looked out into the night, we could see two, tiny, bouncing screens as they rocked back and forth in teenage hilarity, while texting 15 people at once.

TONSORIAL MATTERS You know how I went on at length last week about my preparations (or lack thereof) for a rare spate of public appearances, including at the Ballet Fête*ish. That process involved going to a new hairdresser ever since the closure of Pink Salon. In the early years of this column, I loved going and trying new stylists regularly. I'd usually just tell them to do whatever they wanted and judge them based on that. Eventually, I got tired of the carousel of styles; I began to feel like one of those people that does stupid haircuts and colors because they haven't any idea who they are or what works best for them. As a style leader, I felt it was my role to look my best – by my definition – and eventually settled on going to one salon and one stylist. And that's what I did. And then she moved. I moved slowly in trying to find a new stylist. It's not like I don't know a thousand of them, but I knew I had to proceed with caution. I decided to try last year's "Best of Austin" award-winning salon, Urban Betty (www.urbanbetty.com). I was set up with stylist Mia, who is just one of those stylists who has a knack for making a client comfortable. She suddenly had me spilling out the history of my hair and things I've done with it, then coaxed me to tell her what I wanted her to do. It seemed so easy in Mia's hands. Once she and I decided on a course of action, she confidently worked the color in and did my brows while we were waiting. Then she snipped, snipped, snipped at my hair, and the glorious color she chose became visible. As she perfected the cut, I was so thrilled with it that I imagined that she could very easily become my favorite new stylist. Good work, Urban Betty! We get why you were voted Best Hair Salon in '08.

REMNANTS This Sunday, Sept. 27, the Breast Cancer Research Center is holding its fundraising luncheon at the Renaissance Hotel. Golden Girl Rue McClanahan will be attending, and the honorary chair of the event is Gail Chovan. All info available at www.bcrc.org... Todd Wolfson's benefit a couple of weeks ago at Antone's was a great place to spot local celebs and glitterati. Todd knows even more people than I do, and they all seemed to turn out to hear a great list of bands and buy goodies from the silent auction to help Todd while he recovers from surgery on his arm... The effervescent Carla McDonald is the face of so many things, but now everyone can see her on her weekly News 8 Austin report on the arts. Called the "Arts Minute," the promotion is for www.nowplayingaustin.com, which itself is part of the Greater Austin Creative Alliance. See her on News 8 on Wednesdays, 4-5pm.