In between TV marathons, Stephen Skip-Bos to his Lou all over town at the functions he can still make it to 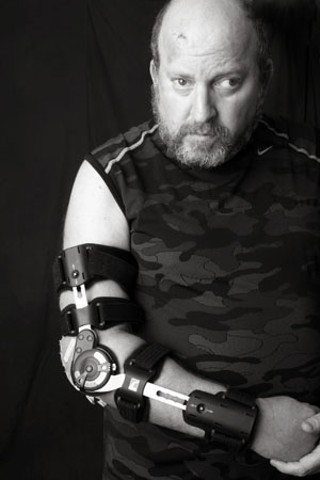 Last night we celebrated "Putting Todd Back Together" at Antone's. Now let's make sure he stays together. (Photo by Todd V. Wolfson)

THE REPORT Okay. I'm sick. Most of you know that already. Diagnosed with terminal prostate cancer in October 2007, I was given a few months to live. My prostate-specific antigen levels were already fatally high, so I chose to decline treatment. Obviously, I did not die within a few months of diagnosis. In fact, I began to start wondering exactly when I would start breaking down, but it was already happening by then. My most recent PSA is the highest it's ever been. There's no question that it has metastasized – probably into my liver and kidneys. I am so thoroughly fatigued that I spend the bulk of my days and nights in bed. When I'm out of bed, I have to make sure my cane (I use my grandfather's) is near, and I often need help getting around. It's hard to reconcile my previous vision of myself with this new one, where everything moves very slowly and every step can be exhausting. But occasionally, I can rally enough strength (and assistance) to make it out to the events that are important to this column. Not regularly, but I did have a great (assisted) time last weekend.

STARS! I love it when those suave scoundrels Dennis Karbach and Robert Brown throw a movie day at the Paramount, like they did two weeks ago. I went with Stephen Rice (KOOP's OutCast) and Mark Erwin (www.standardanswer.com). I decided it was the perfect occasion to wear a fabulous outfit based on my custom-painted Starry Night canvas slip-ons, and I was so right. Everybody noticed them and talked about them after having read about them in my column three weeks ago. And I loved showing them off again. The film Robert and Dennis chose was Julie Andrews' Star!. Star! was Julie's long-awaited triumph after winning the heart of the world in The Sound of Music. It was a big bomb. A big stink bomb, as a matter of fact. But in reality, though it is too long, the movie has exquisite production values, fine acting, and glamorous gowns. Afterward, we all scurried up Congress to Robert and Dennis' ridiculously fabulous house and had cocktails, lasagna, and a charming reception with the likes of Bettie Naylor and Libby Sykora, Candace and Michael Partridge, Skot Tulk and David Sweeney, and the iconic Becky Beaver (whom I'm accompanying to the Ballet Austin Fête*ish 2009 this weekend). But alas – we had to leave for yet another party; this one was a pool party for Equality Texas at Kregg Elsass' amazing home, with its endless backyard and generous pool. I simply couldn't stay long there. I was going to spend the night at Mark and Stephen's, and I was anxious to get over there so I could relax on a more permanent basis. I lounged on the couch and instigated a frisky game of Skip-Bo, until I slipped into dreamland.

TV HAZE Since I have been confined to bed a lot, always swaddled in bed jackets from Blue Velvet, I have to make a disturbing admission: I've begun to watch TV. I hate TV, I hate commercials, and I hate reality shows. But there I was, immobile on the couch, subjected to a marathon of The Real Housewives of Atlanta because I had no idea how to operate the remote control. I laughed, and I cried. I felt like vomiting, but my prurient interest wouldn't let me take my eyes off the screen. NeNe. Kim. Kandi, et al. Absolutely revolting examples of human beings who no more represent the real housewives of Atlanta than I do. I watched for hours. But then the marathon ended, and I switched over to MSNBC and had the pleasure of catching the beginning of another marathon, this one charmingly called Lockup: Raw. It was like watching Oz but without the fun sex. On the other hand, I'm obsessed with Mad Men. Spent many days watching seasons one and two so I can catch up, and now, if I don't watch Mad Men every night, I feel like I never woke up.

SAGE WORDS "A woman without a little black dress has no future," said Coco Chanel, and generations of women have proven it to be true. Therefore, the fab SoCo landmark boutique Blackmail presents its second annual Little Black Dress Contest. Be sporty; be avant-garde; be sleek; be fabulous. But just make sure you made the dress yourself. Application packets are available at Blackmail, 1202 S. Congress, and the sky's the limit. Completed dresses are due by Oct. 1. Judging, awards, and an evening of the little black dress will take place on Wednesday, Oct. 7. For further info, call 326-7670 or e-mail info@blackmailboutique.com.